The revolutionary Sudan sit-in has been destroyed, but we’ve come too far to turn back 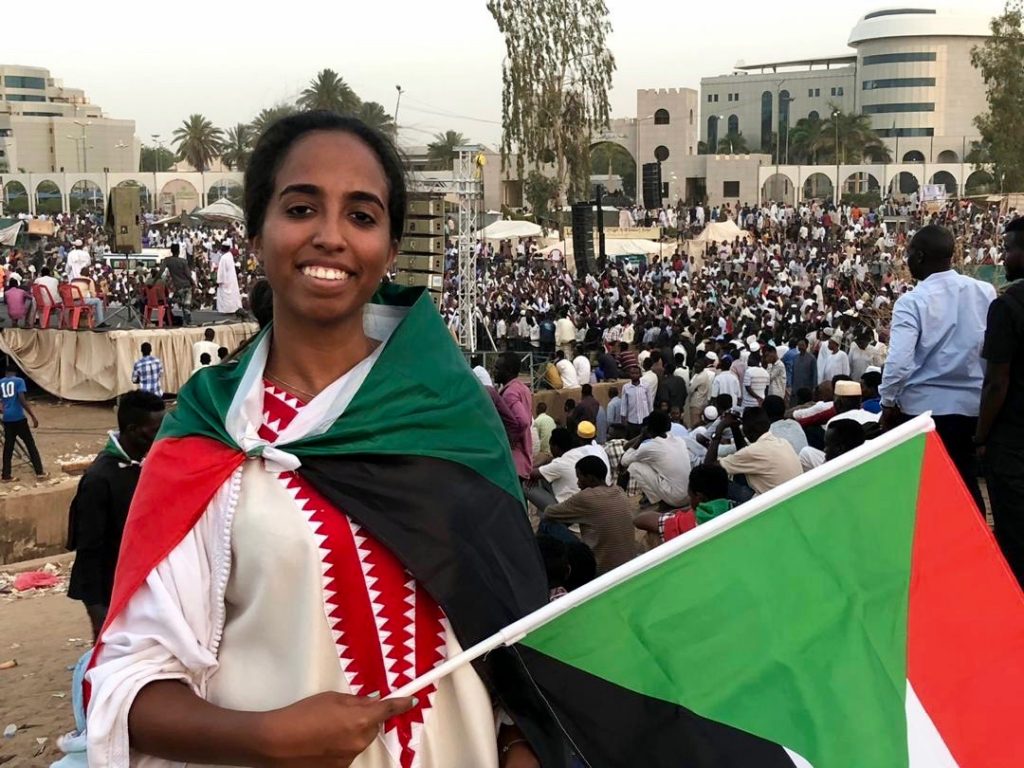 TW: mentions and descriptions of rape and massacre

At 4:30 am on Monday 3 June, the last day of the holy month of Ramadan, the Khartoum sit-in was surrounded by the Rapid Support Forces. Over the next few hours, hundreds of peaceful protesters were massacred, beaten and tortured.

Women protesters, hailed amongst Sudanese activists as modern Kandakas (ancient Nubian warrior queens), were raped by soldiers in the streets. Videos which circulated on WhatsApp showed the tents that once hosted discussion groups, free medical services and even mental health counselling quarters, being torched. Ashes and twisted, charred metal are all that remains of the stages that once hosted musicians from Ayman Mao to Abu Araki Al-Bakheit, and pumped revolutionary music to millions. Like its counterparts across Sudan, the Khartoum sit-in was reduced to rubble. Less than a week after the massacre occurred, the military began painting over the revolutionary art that adorned every wall, in a clear campaign to not only dismantle the sit-in but to destroy its very memory.

I first visited the Khartoum sit-in on 13 April. Following four months of peaceful protests, my people had overthrown our 30-year “President” aka war criminal Omar Al Bashir, and a day later, his equally complicit usurper, “President” Awad Ibn Aouf.  I had flown home from New York to witness it for myself. For the first time in my generation’s lifetime, there was the possibility of a Sudan free from the Muslim Brotherhood and Islamic fundamentalism, from tribal hierarchies and ethnic cleansings and from a state founded on oppression and maintained through fear. Khartoum looked and felt different, not only to the place I grew up in but to the city I had left only four months prior.

In the Sudan I knew, publicly speaking out against the government was considered suicidal, and yet that night the streets were full of people of all ages dancing together and cursing Al Bashir’s regime at the top of their lungs. I screamed every insult I could think of about the man who had divided and destroyed my people for so long. Strangers congratulated me on this monumental moment in our history and we posed together for commemorative selfies. While criticising Sharia was hailed as blasphemous by a government that not only refused to recognise other religions but used its strict interpretation to police and punish women in particular, Muslims were loudly and proudly disowning the politicisation of Islam. I watched as my people overthrew decades-old shackles of fear, and it was exhilarating.

I will never be able to accurately describe the feeling of being at the sit-in to those who never got the chance to be a part of it. While the Sudanese Military Headquarters embodied the dictatorships that have plagued Sudan since independence in 1956, the sit-in which surrounded it stood as a testament to the people’s power. Growing up Sudanese, the regime gave us plenty of reasons to feel ashamed and embarrassed of our nationality, from lashing women for wearing trousers to arresting British teachers for naming teddy bears Muhammad. Outside of my obsession with Sudan’s ancient history, I’d never been proud to be Sudanese.

Spending time at the sit-in, however, changed that instantly. I was overwhelmed with pride and admiration for my people. Home to hundreds of thousands of protesters, who came together to both celebrate the end of dictatorship and reassert the movement’s central demands of freedom, peace and justice, the sit-in was a testament to Sudanese perseverance and open-mindedness. Despite suffering brutal repression for four months, which is thought to have left over 100 protesters dead, the determination of my people to ensure that there was real change was palatable.

The Transitional Military Council has used announcements, warnings and veiled threats to repeatedly portray the sit-in as dangerous and chaotic as a justification for their slaughtering and violence. In reality, the sit-in was a safe space that felt like home, and the protest community like family. It became a highly functioning city-within-a-city. Before being allowed in, I was searched five times by volunteers who worked to ensure that the sit-in stayed safe, even prohibiting pens. A few days later, one lady even checked each Oreo packet I had brought to give out, making sure they weren’t expired and wouldn’t make people sick.

The sit-in site occupied about one square mile of downtown Khartoum, between the military headquarters, the airport, University of Khartoum and the Blue Nile. There were tented campsites, lit stages for performances and speeches. There were areas dedicated to commemorating the fallen, covered in banners, paintings and information about them and how they died. On the one hand, political and civil and society were given spaces where they could discuss and debate social issues, whilst in other areas people gathered more casually around tea ladies to discuss the issues of the day.

Protesters volunteered to keep the sit-in clean. People from across the country sent in supplies which were then distributed by volunteers making sure people had enough food and water. Medical and dental services were established, for and by protesters who sought to model a community based on equality – providing healthcare not only for those injured in protests but for those without access to basic healthcare in the first place. Reading and discussion corners were set up. In stark contrast to the surrounding city, homeless children were taken care of and literacy classes organised.

A tent was set up to educate about the prevention of sexual harassment of women. Face-painters kept up morale and entertained children. Million-man marches were called whenever negotiations between the military council and protesters stalled, as people continued to assert their peaceful power. The sit-in was a place where friends and strangers alike gathered to debate the best governmental structures and discuss what the nation’s priorities should be. The possibilities seemed endless and the people’s power all-empowering. I left the sit-in each day feeling invincible.

“The sit-in embraced and unified people of every ethnicity, religion, class and gender”

The sit-in was beautiful, not only because it represented freedom, but because it embraced and unified people of every ethnicity, religion, class and gender. Every government Sudan has ever known, starting with the colonial Anglo-Egyptian Condominium, has worked to divide-and-rule us. Our differences, from skin colour to language, have been exacerbated and manipulated by regimes to reinforce their own power as they installed tribal hierarchies.

Since independence, Northern-Central Sudanese governments have imposed a singularly Arab-Islamic nationhood, on the people in blatant disregard of the country’s actual ethnic and religious diversity, using education, propaganda and fndamentalist indoctrination and enforced using military might. As a consequence of successive Northern government’s racism, we’ve been forced to watch two bloody civil wars with Southern Sudan, ethnic cleansing in the Nuba Mountains and Darfur, and the loss of Southern Sudan in 2011.

Against this background of ethnic tensions and animosity, the sit-in helped to re-define Sudaneseness, bringing different groups into close proximity and our diversity into sharp focus, and showing us our capacity to unite and work together. When a train carrying protesters from Atabara arrived at the sit-in on 23 April, the town which birthed the revolution, Sudanese people of every shade and class lined the streets, singing, chanting and welcoming them to the sit-in. People denounced arbitrary divisions of being “African” or “Arab”, we were all there in the sit-in together breaking bread, where the shade of your blackness no longer mattered.

Religious differences, once considered paramount, were thrown out the window as Coptic Christians guarded Muslim prayers and Sufis, Salafis and Animists worked together. Northerners chanted, “We are all Darfur”, calling out the regime’s tribalism and racism. I watched as they marched for the freedom of 120 Darfuri students and demanded the end of the 12-year blockade of the Nuba Mountains.

I knew the sit-in was powerful when, having grown up in Khartoum where people frequently referred to darker skinned Sudanese as abeed (slaves), I heard Northerners publicly recognise their historic racism, apologising for their inaction when there were atrocities on Sudan’s peripheries. What I loved most about the sit-in, was that at the centre of a highly unequal society, no one in the sit-in cared who you were or where you were from. Unlike broader Sudanese society, it didn’t matter what tribe you were from, how much money you had or if you were a woman. It only mattered that you were committed to a new Sudan.

The sit-in transformed into a centre for the arts, with protesters performing resistance to the regime through dance, music, theatre, and street art as decades of repressive creativity were unleashed. Just as the sit-in reclaimed physical space, the street art reclaimed the visual narrative which had been monopolised by the state. The art served as a continuous reminder of the resistance, giving it a permanent presence even when protesters were forced to take shelter in their tents from the 45-degree heat this Ramadan.

While a few weeks prior, this type of street art would have been unthinkable, artists turned out in droves to reinforce the central messages of the revolution. Having had two popular revolutions (1964 and 1985), in which women participated and were then largely excluded from the political system, artists worked to remind the public of women’s leadership and dominance of the resistance, tracing their lineage back to ancient Kandakas.

Artists continuously reminded the public of the ethnic pluralism wiped out by Bashir’s regime, by creating murals that emphasised Sudanese diversity. Most importantly, they reminded the public that although Al Bashir had been its head, the resistance needed to overthrow the deeply entrenched Muslim Brotherhood system, that there was still much work to be done.

The sit-in no longer physically exists and I’m heartbroken that it’s gone. All that remains are images and memories of what a true Sudan looks like. On 3 June, the Rapid Support Forces (paramilitary) laid siege to the capital on the orders of their leader “Vice President” Mohamed Hamdan Dagalo, aka Hemedti. The RSF continue to beat, murder, torture and arbitrarily arrest civilians.

They’ve cut Sudanese people off from one another and attempted to hide the massacre from the outside world by turning off phone services and the internet. We drag those they’ve murdered out of the Nile, with stones tied to their feet. Doctors are prevented from treating those they’ve critically injured, as they surround hospitals and intimidate staff. We can’t even bury our martyrs without fear of RSF raids. The RSF came into Khartoum to protect Al Bashir before he was overthrown, and today they are continuing his legacy of brutal oppression. The army stands idly by and once again my people are on their own.

While some say that we are back to square one, faced with the prospect of yet another genocidal and brutal dictator, they’re wrong. We now know how powerful we are when we unite – the sit-in showed us this. What we have left is the hope that was ignited in every Sudanese person who stepped foot into a sit-in, or even those in the diaspora who lived the experience vicariously through social media. Today all of Sudan is a sit-in as people across the nation participate in civil disobedience. We won’t let them separate us again, we’ve come too far to go back now.