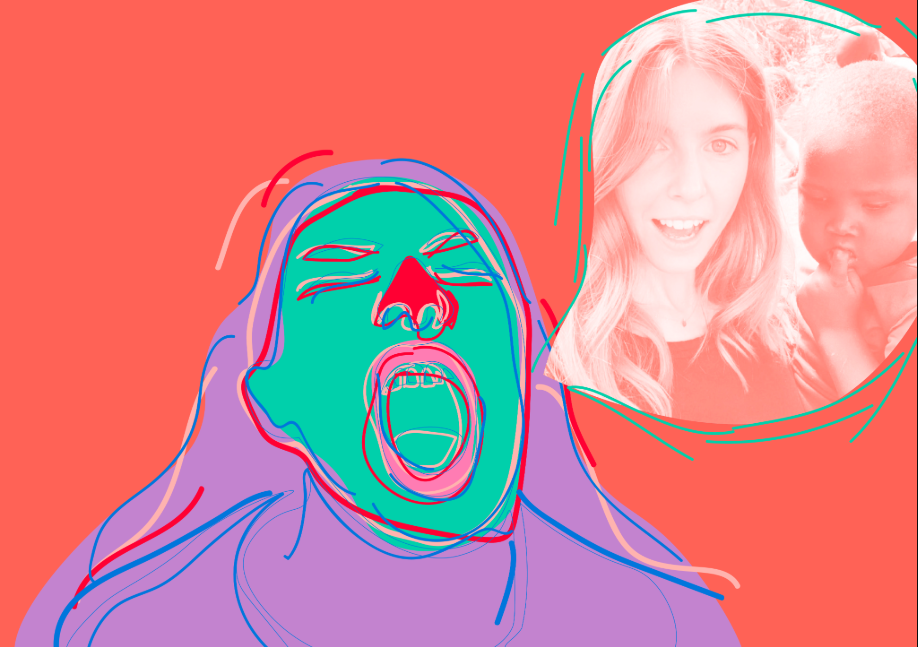 God, it’s just been one of those weeks where I could really use a white saviour.

Why? Well, for starters America loves its flag more than its people. Since absolutely nobody wants to hug Donald Trump, he turned to the American flag for physical affection. And, the world felt sorry for that flag. Meanwhile, the same banal nationalism that leads to flag hugging is what led to the separation of small children from their parents at the border. As their parents seek asylum, it has been revealed that there have been over 1,000 accounts of sexual abuse under the watchful eye of US immigration officials. These instances spiked during roughly the same period that Trump ordered thousands of children to be separated from their parents and sent to shelters all over the country where the government knew hundreds of abuse and harassment allegations are made each year.

Elsewhere in pop culture, BBC documentarian Stacey Dooley single-handedly saved Africa with an image of a black toddler on Instagram. Here’s what you might have missed in the last week.

“Is the issue with me being white?”, asks Stacey Dooley as she becomes the millionth white celebrity to post a selfie holding a poor African child for Comic Relief on February 23.

Labour MP David Lammy was the first person to call out this wider issue on February 27, and used Dooley as an example of his case in point, saying: “The world does not need any more white saviours. As I’ve said before, this just perpetuates tired and unhelpful stereotypes. Let’s instead promote voices from across the continent of Africa and have serious debate.” In response to Lammy, Dooley wrote: “David, is the issue with me being white? (Genuine question) …because if that’s the case, you could always go over there and try raise awareness? Comic relief have raised over 1 billion pounds since they started. I saw projects that were saving lives with the money. Kids lives.”

This is not a new trope, artist Terence Nance pointed it out with his despairingly long loop of films and TV that have included the “white saviour”. If anything, it’s even worse when it’s not fiction, and Stacey Dooley completely dismissing her role in societal impact is surprising for a documentary maker. She is quick to point out good intention, but if we are to face up to any issues in society, we have to first realise that an individual’s conscious intentions don’t trump wider societal effects. 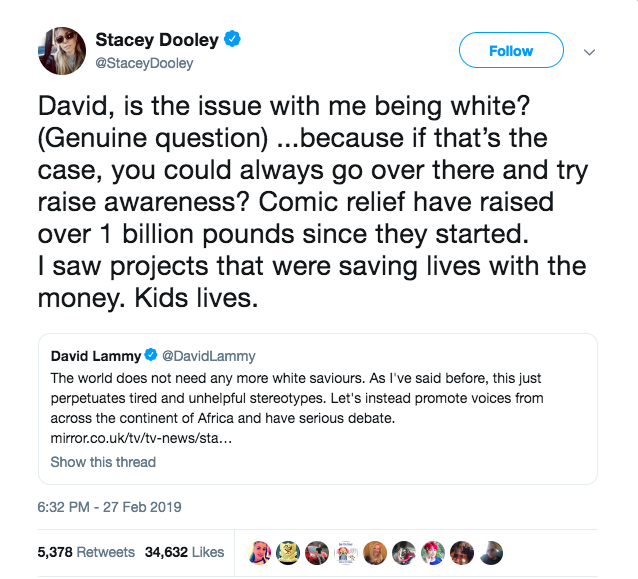 The money being raised to help those in need is not the issue, it’s about questioning the outdated images and story being told to the UK audience. It underestimates people in the UK to say we can only understand the African experience as a cesspit of poverty. Comic Relief churns out a mono-image of a continent on its knees and completely divorces that from the abhorrent actions of the West, instead, it paints the West as the only lifeline for a helpless wasteland.

If celebrities like Dooley are truly interested in helping Africans and people of colour globally, then taking a moment to listen and understand why their actions are regressive. That would be helping.

The High Court has ruled that the government’s Right to Rent scheme is a breach of human rights as it fails to tackle illegal immigration and has a “disproportionately discriminatory effect” against tenants without a British passport.

The scheme, introduced in 2016 by Theresa May as home secretary, adversely affected members of the Windrush generation, even those with documents proving citizenship. Homelessness charity Crisis told the court it had worked with a woman from the Windrush generation, forced to find a new home after a fire, who was not accepted by landlords because she did not have a British passport.

The judge said the Government’s evaluation of the scheme “failed to consider discrimination on grounds of nationality at all, only on grounds of ethnicity’ and ‘failed to ask the right questions’ as far as ethnicity was concerned.”

Having legislation that facilitates discrimination like this plays into the uncertain nature of British citizenship, making it difficult for those who call the UK home to put a roof over their heads under the guise of fighting illegal immigration.

Khloe Kardashian went toe to toe with Kylie Jenner’s best friend, Jordyn Woods, after explosive rumours surfaced that the 21-year-old got with her baby daddy at a party. The world was against Jordyn until Jada Pinkett Smith stepped in and mobilised black Twitter. Now Jordyn is a saint.