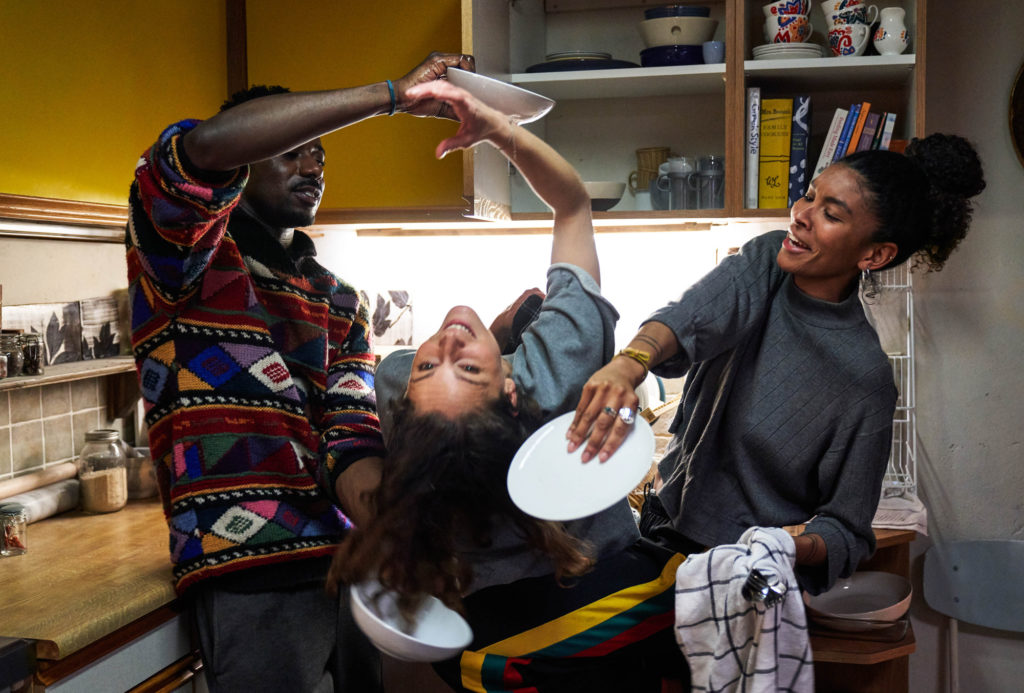 Trigonometry is an addictive trio of polyamory, community and interracial love

At first, I thought the show Trigonometry was set to be a new documentary about maths but turns out the BBC has recently released a drama centred on polyamorous love. Trigonometry joins the ranks of other shows dipping the general public’s toes into the world of non-monogamy – shows like Wonderlust and You, Me, Her. But unlike most programmes centring black and brown people on the BBC, this one isn’t relegated to BBC 3 (no offence, they have some great shows), it sits loud and proud on its terrestrial sibling channel BBC 2.

Protagonists Gemma, played by Thalissa Teixeira, and Kieran (Gary Carr) are a 30-something couple living in London. She owns a pokey café which they live on top of and Kieran is a paramedic suffering with panic attacks after an incident at work. Like many young couples working and living in London with different work schedules – the two struggle to find time for each other and are often passing ships in the night. And although seemingly leaning into a more heteronormative relationship, Gemma is queer and refuses to have this part of her identity erased just because she’s in a relationship with a man.

To save money the couple end up getting a lodger, a French former synchronised swimmer, Ray (Ariane Labed), who is trying to find her independence after a career-changing accident. It soon becomes apparent that the two both fancy Ray but instead of suppressing it, they follow their desires and explore a triad (three-person relationship).

The show serves as an antidote if your introduction to polyamory has just been Louis Theroux’s documentary on the beeb, (where he basically pokes holes in the interviewee’s lifestyles) Trigonometry manages to dispel myths that polyamory is a white thing or some off-the-cuff immoral subculture for the sexually deviant. Here it’s normal, and as family professor Roger Rubin states, it’s normal for most the world with only 43 of 238 societies being monogamous.

It also looks much better than your average documentary. It’s filmed in this dreamy grainy filter, the treatment of the character’s relationship is delicate and really, it’s hard not to fall in love with the trio – they’re all just so kind. By no means are any of the three perfect, it’s messy at times and the blatant and continuous lack of communication between them leads to confusion, upset and jealousy.

Like many shows though, Trigonometry runs off of desirability –  they fall into the trope of showing a closed triad relationship built up of two queer women and a straight guy, why not two queer men and a woman? They are also all hot, young and thin. Opinions vlogger Kat Blaque, who often talks about polyamory and being a black woman said in a recent video: “there are a lot of people who’s understanding of polyamory comes from couples pursuing sex with a third.” While this is a part of polyamory, it’s not everything Kat explains. And although their relationship is so much more than a physical one, it does seem to show a couple searching for something more by finding a “unicorn”. Which they even joke about, giving Ray a unicorn cake for her birthday.

Outside of polyamory, Trigonometry shines a light on gentrification in London. Each of them have wonderful careers and somehow own a bloody house in London, but Gemma has to fight to stop her cafe closing and prevent job losses for her young workforce. We delve into mental health and black men as Kieran confronts the trauma he faced at work – now using swimming as a form of rehabilitation for his injuries.

Yet I welcome the change, gladly. To see a story where their blackness isn’t used as a teaching moment, or all the black people have watery character developments and story arcs is a win. In fact, it just showed what we already know – black people aren’t a monolith. We see that through Kieran and Gemma. He was raised in foster care, as his mother struggled with her mental health, something his sister who is also a single parent is facing. On the other hand we have Gemma, a black mixed-race woman whose mother passed away when she was a child. She was brought up by her white middle-class father who clearly didn’t expect to be left raising her alone. Their relationship is stiff and strained. Although both of their lives haven’t always been easy, this isn’t a show about black pain and suffering – they’re just living.

Now we have a realistic and intriguing representation of London, with not one, but multiple black and brown characters, people from different classes and countries all living in the same community.

In Trigonometry, there’s something quite universal about the characters even if you’re monogamous. More importantly, who isn’t in the mood for a lovey-dovey drama right now?

Rocks stars: Meet the teen BFFs who went from classroom bants to the big screen