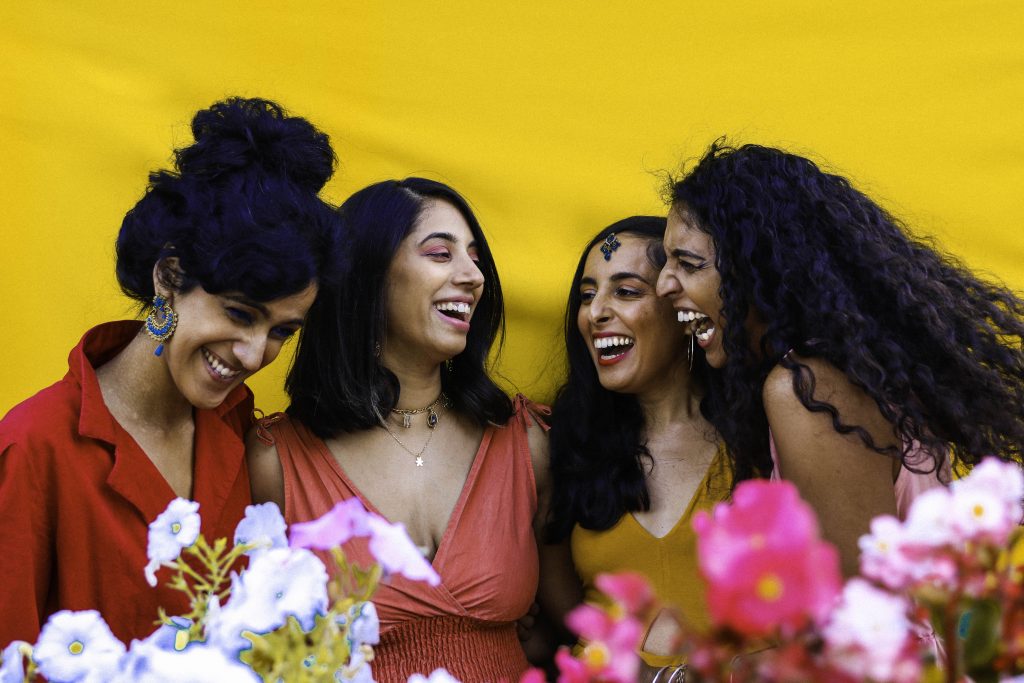 Meet London based poetry collective 4 BROWN GIRLS WHO WRITE: Roshni Goyate, Sharan Hunjan, Sunnah Khan and Sheena Patel. After reading their works to each other on a literary boat party, they instantly connected, created a WhatsApp group, and the rest is history.

I meet the collective at a quaint pub in Stoke Newington, shortly before they perform at a local literary festival. I’m instantly struck by their vibrancy and completely understand their sisterhood. When they first see each other, they spread compliments like honey and burst into laughter at their in-jokes – and also when Roshni pulls out slices of mango in Tupperware and asks if anyone wants any.

They created their collective because they felt like they were missing a sisterhood, and once they’d heard each other perform they experienced a strong sense of belonging “like coming home”, Sheena adds. So, what started as a WhatsApp group set up purely for them to chat to each other, soon became their collective name.

“When they first see each other, they spread compliments like honey and burst into laughter at their in-jokes”

Of this, Sheena says, “We are four brown girls who write … It’s like Fat Joe [an American rapper and actor who prides himself on being fat]. He called himself Fat Joe so nobody else could call him Fat Joe. If we call ourselves 4 BROWN GIRLS WHO WRITE, no one else needs to ask what our background is – it’ll be like we’ve already talked about it.” Roshni adds that they’re particular about their name being written in capital letters “to take up more space”.

Despite sexuality being a somewhat taboo subject in South Asian culture, their poetry addressing this is raw and unrestrained. “Because I’m from a Pakistani background, a lot of what sex represents is tied into religion, shame and guilt,” says Sunnah. That’s something they play around with in their poetry. She comments that “It’s really fun to write into the things that you’re scared to say, it’s really liberating to play into that space, because it’s not something you’d feel you naturally have permission to do.” Roshni agrees, adding, “Even though sex is taboo, it’s so present, and you can’t avoid it. Poetry as a form is so perfect for tackling those subjects head on, and working through them.”

Sheena comments that to her “sex is sacred”, and that whilst “religion plays into oppressing you, it’s also good to use that oppressive power as a liberator”. For her, the temple really speaks to the sacred act of giving yourself to someone, rather than being oppressive. By subverting stereotypes of what sex in religion represents they empower themselves and their bodies.

Sunnah ends her poem “Except My Mouth is Not a Door” with the powerful, evocative words:

“My mouth is a shrine. Leave

your shoes at the entrance

Wash your feet by the river

I am a temple

Bow your head and bless yourself”

Trauma is explored in their works too. There’s “no end point”, says Roshni. “It’s not like you’re on this healing journey, and you’ve reached the end and achieve transcendental knowledge. It goes back and forth, and to admit that you have to really dig deep, and the form of poetry allows that but also our sacred space, the four of us holding each other allows that as well.”

When performing, 4 BROWN GIRLS WHO WRITE stand together. As each one reads, the three not performing stand back holding each other, which Sheena describes as her “harbour”. Vulnerability came up a lot in our discussion, and Sheena says “there’s strength in vulnerability – it’s such a crazy, beautiful thing because the more you show the wound the more strength you get from it.” Shenna adds, “I can go to these darker places because I know I’ve got this tug that pulls me back. It’s central to what we are. That’s why we’ve given ourselves permission to go to these dark places.” The collective give each other the confidence to be vulnerable, and Sharan comments that “we’ve talked a lot about not having a barrier with the audience, because that’s what you read for, and I’ve definitely thought a lot about it. And I think I’ve grown a lot since we started”.

“The week after the launch I was flying. I was like, ‘I can do anything; this must be how white men must feel’”

Their experience of publishing a collection with FEM Press has been incredible – and, having sold over 350 copies so far, they now realise nothing is beyond their reach. Georgia Mitchell, Publisher at FEM Press, says when she first saw them perform “they just stunned us; their performances were incredible, so engaging and immediate, but it was also their sisterhood which was (and still is) so beautiful to watch. Them gassing each other up and their shared affection was as much a part of the performance as the poetry. Publishing a collection of their work, where one voice gave way to another, like one of their performances, was such a beautiful idea to us. Their poetry is all so different, but their styles converge in these intricate and slippery ways which we knew would make a gem of a book. We’re so proud of it.”

“The week after the launch I was flying. I was like, ‘I can do anything; this must be how white men must feel’,” Sheena laughs. “I was like I’m a white man – I can do whatever I want!” For Sunnah, it reminded her of, “the power of being seen and being heard, of people coming to our launch, and resonating and responding”.

So, what’s next for 4 BROWN GIRLS WHO WRITE? They’re taking a show, The Poetry Phamily, to the Edinburgh Fringe Festival, and they’re crowdfunding to make this happen.

“Artists who are up and coming – or anyone wanting to get anywhere – are always told they need to do things for free, and that’s OK if you’re privileged but you shouldn’t be expected to do things for free,” says Sharan. “It’s going to be an amazing show,” Sunnah adds. “And it’s not just about us – we want to continue creating inclusive spaces for queer, trans, people of colour, that are incredible artists first and foremost. It’s going to be a unique and incredible show, and we just need the support to get there.”

4 BROWN GIRLS WHO WRITE can be found on Instagram. You can donate to their crowdfunder here.