Wanderthirst: a hijabi’s guide to Budapest 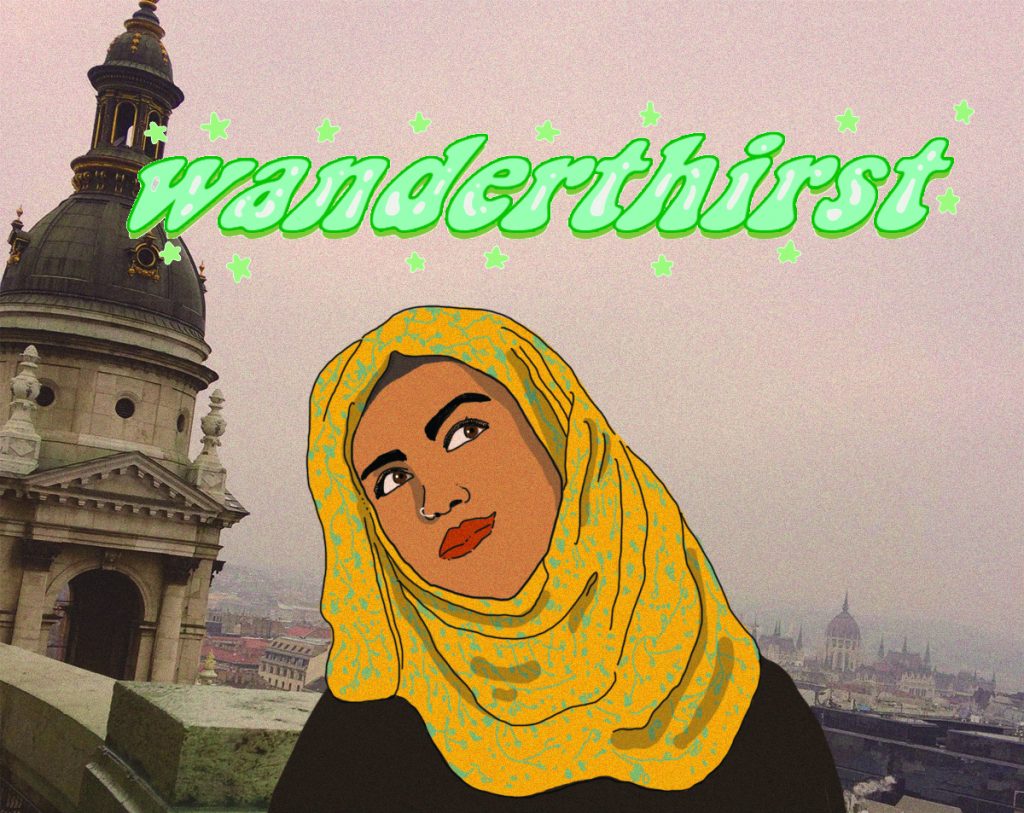 Hungary is a beautiful country and Budapest, in particular, is so enthralling that I’ve visited the city twice before. However, being a British Muslim woman of South Asian descent visiting a predominantly white, right-wing and Christian country has also been jarring at times.

Whenever I fly somewhere, I need to steel myself before going through airport security. Why, you ask? Well, I happen to be a brown, visibly Muslim woman who wears the hijab. For those of you who don’t know what that means, let me tell you about a typical airport experience:

I’ve perfected the art of complying with airport security guidelines over time. I’ll be at the metal detectors with my boots off and all my liquids in a clear plastic bag in the time it takes most people to take off their coat. It’s always awkward stepping through the detector; I never have any metal on my person (except my nose ring), but occasionally I’ll look up to be told by a uniformed guard that I’ve been selected for a “random” search and have to go through the body x-ray machine or be frisked.

“Hungary is a gorgeous country and the first time I visited Hungary, I bore witness to its stunning countryside as I crossed the Hungarian-Croatian border via train”

On my trip to Budapest, I had the unique (and bizarre) experience of having an officer energetically wave a scanning wand around my head as if to figure out if I was somehow hiding something under my headscarf.

Hungary is a gorgeous country and the first time I visited Hungary, I bore witness to its stunning countryside as I crossed the Hungarian-Croatian border via train. I had the distinct privilege of running afoul of border security that time too. Guards boarded our train to check our papers and after a cursory glance at my white friend’s passport, the moody official took my passport out of my hands and spent the next five minutes slowly leafing through every single page.

I wondered what he was looking for. I hadn’t been outside the EU, so didn’t have any visa stamps. I hadn’t been anywhere particularly “suspicious”. I hadn’t been on a pilgrimage to Saudi Arabia or even visited family in Pakistan. But even knowing that the border guard wouldn’t have a reason to detain me didn’t stop me from being nervous. It was fine, but experiences like this make passing through security a nerve-wracking experience.

Budapest is a fantastically cheap option for a holiday if you’re on a budget. Everything is ridiculously low-priced, even at post-Brexit exchange rates. It’s possible to get airport transfers for less than it costs to get a coffee and there are lots of fantastic restaurants that sell everything from traditional Hungarian goulash to vegan-friendly fare for less than a fiver in the city’s thriving centre.

As a working-class student, it was great to travel and not have to scrimp and save for months for flights and accommodation. It was even better to head home and realise I still had a huge chunk of my spending money left despite treating myself whilst away. Being a student in a European city allows you a lot of perks; most museums, art galleries and tourist attractions offer a student discount or free entry for students and under-25s.

Hungary is also a country awash with a lot of Islamophobic politics at the moment…even the Hungarian prime minister Viktor Orbán recently described refugees as “Muslim invaders”.

Travel in the city is also cheap as chips. For about £5, you can travel along the city’s bus, trolleybus, metro, tram and suburban rail lines for 24 hours – s perfect for when you have a busy itinerary.

However, Hungary is also a country awash with a lot of Islamophobic politics at the moment. Right-wing groups [such as …] are angry at the thought of Syrian refugees entering the country, and to these people, outsiders are not welcome. Even the Hungarian prime minister Viktor Orbán recently described refugees as “Muslim invaders”. Unsurprisingly, I was initially worried about sticking out like a sore thumb.

I’m used to getting funny looks for wearing a headscarf in predominantly white or Christian spaces and Budapest was similar in this respect. However, I didn’t get any abuse levelled at me, and I think most people staring were doing so out of curiosity.

A tiny macaron shop and bakery a short walk from St Stephen’s Basilica, Chef Dodo sells macarons that are just as good as those in the window of a Ladurée – without the price tag.

The stunning Parliament building sits on the riverfront and it’s well worth getting a tour around the seat of Hungarian power if you have the time.

This is the place to get the best views of Budapest. The castle is also home to an art gallery, a museum that details the history of Buda and Pest and plenty of places to buy souvenirs.

Vegans, vegetarians, people with allergies or intolerances and people who require halal or kosher food can rejoice – it’s fairly easy to find food for all dietary requirements.

Most people speak English so there’s often no language barrier.

Transport is fairly wheelchair accessible – the two main trams and most buses are accessible for wheelchair users, as are some metro stops and the rail system. There is also a minibus service that ferries passengers with reduced mobility who book in advance.

Although Budapest is quite a liberal city, with a thriving LGBTQI+ scene, my friend (also a brown Muslim woman) and I  found that we got some unfriendly looks whilst staying together in a double room at a cheap hotel. Queer couples might want to be aware that although Hungary is improving its stance on LGBTQI+ rights, it might be worth doing some extra research before booking.