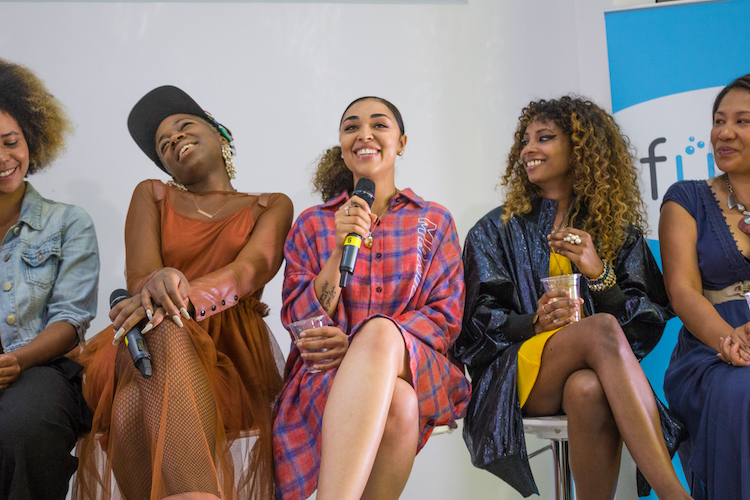 Women from the BAME communities are always under represented across the creative industries, yet they exist and are awesome. Watch back  what went down at THE FORM[YOU]LA event  back in June where panellists shared nuggets of knowledge, their heart, the power they hold within them, the importance of language culture and identity and their FORM[YOU]LA for success.

Set up by cultural strategist Arfa Butt, this panel was specifically created to empower young women by giving them insight and knowledge, confidence, motivation and the necessary skills to enable them to become self-sustaining music industry professionals.

Ayishat Akanbi is a fashion stylist, writer, cultural critic based in London, UK.She has successfully found a balance between maintaining cultural awareness, individuality and an archetypal footprint in both creative and academic spaces alike. Ayishat has clients within the music, fashion, film and TV industry.

Farhana Aboo develops marketing strategies for AEI’s music releases to the strategic use of data to enhance and elevate marketing efficiencies, Farhana works on some of the biggest electronic music brands in the world.

Misha B is a British singer, songwriter and rapper. Born and raised in Greater Manchester. Misha B rose to notability as a semi-finalist on the eighth series of The X Factor. Several sources have noted her powerful vocals.

Hannah V is a pioneer in a new generation of entrepreneurial female producer/songwriters, she is currently working with some of the UK’s most in-demand artists pop and urban artists including Stormzy and JP Cooper.

DJ Melody Kane has gained a solid reputation amongst her peers within the music industry as being one of the most professional, talented and focused female DJs in the UK. She is an on-air personality and mix show DJ for BBC Radio 1Xtra, and can be seen performing at all major clubs and festivals across the UK and abroad.

Kimberly Nichole is a force to be reckoned with. Exploding on the national scene on season 8 of The Voice, Kimberly Nichole garnered superlative praise from the likes of Pharrell Williams, Christina Aguilera, Lionel Richie, Mark Ronson and Reba McEntire, with her show-stopping performances, stylish presence and vocal power.

Ashleigh Jadee after studying media at college, went onto doing photography within the UK music scene shooting artists such as Wretch 32, Wiley, Scorcher, Skepta, JME, Ghetts and more. Teaching herself how to film she then went into videography and became an assistance to Jak Frsh.

Amanda Maxwell works at Boiler Room’s London HQ in the music team, sitting across activations for International Women’s Day and other community rooted projects. She’s a board member of women in music network shesaid.so and a regular contributor to panel talks on subjects related to inclusion, representation and equal empowerment within the creative industries. Amanda manages a number of London based artists and DJs.