The team behind the show have called him Aladdin, a girl, and a dog. We need justice for this hunky builder before he becomes another Dr Alex 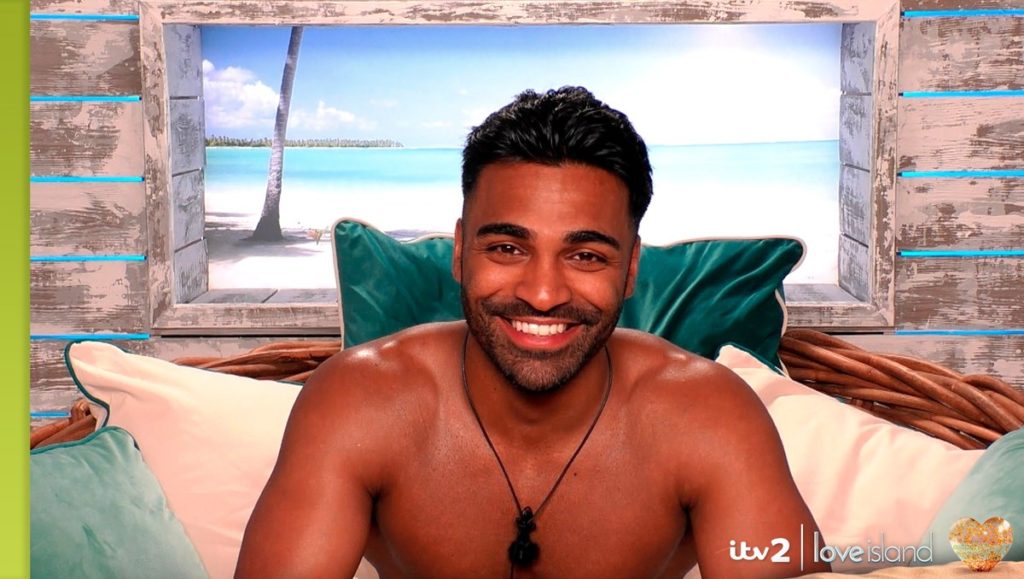 As a contestant on season 11 of Take Me Out, I joined the handful of South Asians trying to find love on reality TV. My quest was not fruitful, as I had my light turned off numerous times and so never made it to the sunny Isle of Fernandos, mirroring the experiences South Asians have in real life, where they are often overlooked in favour of their white counterparts. Despite this, I remain a sassy South Asian woman interested in finding love on her own terms.

But with approximately 3 million South Asians in the UK, why are there only a handful of South Asians featuring on UK reality shows? And when we do feature, why do we have to conform to stereotypes or be the plucky outsider to get airtime? Our guilty pleasure Love Island has returned. Even with a slight dip in ratings (the first episode drew in 2.5 million down from over 3 million in the summer), the resounding success of the show proves that UK audiences love to watch lover’s spats. The winter series has brought us the so-far unlucky 23-year-old Nas Majeed, a hunky builder from London.

While I initially thought this was a great way to start the new decade – this could mark a major step forward given that he’s only the third South Asian on the show and the first with Asian and Carribean descent. However, from the first episode, he’s fallen into the trap of playing into tired tropes already.

It has been gut-wrenching to see Nas refer to himself as “quite exotic”. A word reserved for cocktails, birds and locations. For a South Asian person swiping through the plethora of dating apps, it’s not uncommon to be on the receiving end of jarring messages about our “exotic” looks. Whilst this is usually meant as a compliment, it feels uncomfortable. Exoticising a person of colour makes us feel like we are not the norm, a rare treat for those with an unusual palate. The “exotic” comment set the tone for Nas, the otherness it alludes to is a curse he now seems unable to shake.

Edward Said first put forward the idea of Orientalism in 1978. It’s the way in which US and European writers portrayed Asia and the Middle East as bizarre, regressive and impossible to understand. The othering of cultures often takes the form of romanticised depictions of these regions as mystic fantasy lands. Watching the series, one can see Love Island producers have implicitly succeeded in depicting Nas as an exotic oddity who can’t get the girl.

The characters within the show seem to treat Nas as an anomaly, patronising him about his chances of finding someone while he is clearly the soundest person in the villa. After being rejected by every girl on the first day, Nas humbly asked to pair up with Siannise, who went on to say he “kind of looks like Aladdin” and the cringeworthy magic carpet jokes soon followed. ITV also repeated this joke to their 1.1 million followers on the Love Island Twitter account.

“The ‘exotic’ comment set the tone for Nas, the otherness it alludes to is a curse he now seems unable to shake”

Nas said he was “actually gassed” to be compared to Aladdin which is too cliche to bear. Despite being tiresome, the comparison also fails to distinguish between South Asian and Arab culture. His endorsement is indicative of how tokenised people act when they are forced to conform in spaces that see them in a certain light. It’s hard to communicate how it feels to be the only one in the room.

If it wasn’t bad to see this cringe-worthy plot play out on our screens, when the show isn’t airing the Love Island social team are on hand to reinforce the narrative of Nas being nothing more than a friend,  brother or pet to the islanders. One tweet read: “When you’re friend zoned so hard you just become one of the girls”. Not only do these tweets desexualise and emasculate him but it sends out the idea that men shouldn’t befriend women. It ignores the fact that someone getting to know you is romantic and women are not just sexual objects waiting for men to conquer them.

I’ve barely seen anyone like me be successful in dating on TV.  Series 12 of First Dates, another popular dating show featured a ‘desi duo’. However, their narrative was framed around traditional values as Sadia told viewers “in my culture it’s a normal thing to have arranged marriages.” But I couldn’t really relate.

While this narrative is true for some, not everyone of South Asian origin has similar experiences. We are not a monolith. Take me, a 32-year-old single Indian woman. I don’t feel pressured to get married and the topic of arranged marriages has never come up in my family. And while there is certainly nothing wrong with upholding cultural traditions (honestly, having a family member who knows you well, introduce you to a guy they feel you will get along with, instead of scrolling through dating apps, doesn’t sound like a bad idea), this is a narrative that speaks to a wider issue. None of these shows made any effort to expose the plurality that exists in our community. Very little time is devoted to presenting us as happy and successful in love.

As George Gerbner’s cultivation theory suggests, the media shapes our perceptions, beliefs, values and attitudes. Reality TV is carefully orchestrated, we already know this. In the case of Love Island, it has succeeded in making a handsome, funny, and empathetic guy look undateable. If Nas isn’t successful soon he will become this series’ sauceless friend, the nerdy sidekick, a spare part like Dr Alex or the guy last year whose Mum shaved his bum.