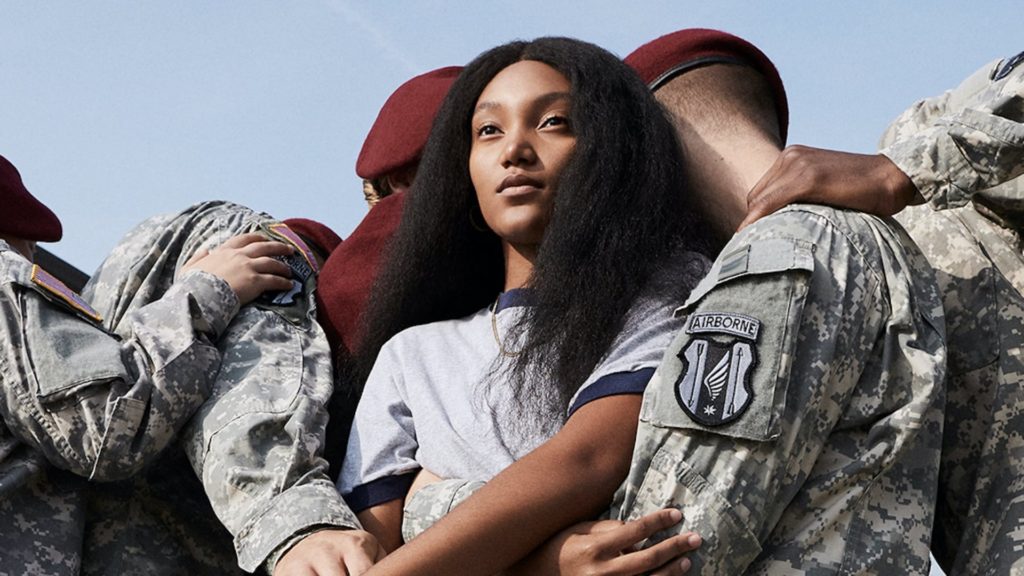 Her debut role as the gender non-conforming badass Caitlin, plus musical side projects, spell a meteoric rise for this teen.

At just 17, Jordan Kristine Seamón is the newcomer who has swapped school plays in her hometown of Philadelphia for an impressive debut in HBO’s hotly tipped We Are Who We Are from the mind of genius filmmaker Luca Guadagnino.

In the show, Caitlin spends most of her time alongside her on-screen beau Fraser Wilson (portrayed by Jack Dylan Grazer). It’s a slow start but what unravels is a tale about puberty, the highs and lows of friendships, consent and modern family dynamics. It shows teenage characters with intense chemistry trying to find their way through unchartered territory in a fucked up landscape.

Caitlin and Fraser, who share an intimate but strange relationship, have the same ambition and same truths – they’re both queer and the show follows them as they try to figure out what that means to them. The first scene deals with Caitlin getting her period and how the pair deal with this new experience. Through their bond, we’re privy to beautiful and relatable snapshots of pubescent chaos.

In many ways, the character required Jordan to make an impressive transformation. She spent four months learning Italian (“by the end, I was like ‘speak English please’”) alongside Yoruba and Spanish, and she also learned how to box, sail and shoot guns – not to mention she shaved her head. Becoming the character Caitlin Poythress took hard graft.

Elsewhere she slipped into elements of the character with ease. Caitlin is gender-fluid, as is Jordan, who recently came out. “I identify as gender-fluid and bisexual. It is something that I am proud of, but people just never really asked and that’s fine,” she reveals. “I did a lot of studying for the character. I asked a lot of friends about their journey and what it is like going through that because I wanted to tell the story as perfectly as possible. It was easier because I myself had gone through the exact same journey but I tried to be as authentic and as respectful as possible.”

“The attention is a lot right now and I’m like ‘woah’ turn it down guys, I’m not that popular”

Jordan is quiet but perks up at times when answering questions over Zoom. Sipping her water at intervals, with her voice hoarse but soothing, she talks about everything from her music (she has just released her self-titled debut album), to working on set and her relationship with her co-stars. We Are Who We Are is set against the backdrop of 2016, aka the year Donald Trump campaigned against Hilary Clinton. This feels pertinent, considering we’re in the midst of the 2020 election. “I do not agree with his [Trump‘s] views. I do not support them. Respectfully,” she laughs.

Jordan’s demeanour feels similar to Caitlin’s in the show: reserved but strong. Caitlin refuses to be boxed in to how and who she is meant to be. She is stronger than our other protagonist, Fraser, who is too scared to break the rules. Caitlin, meanwhile, spends time sneaking out of the army base where they live to secure girls’ numbers.

While it was Jordan’s mum who found the casting call for her role online, the actor made sure she put her all into securing it. After more than five self-filmed tapes, it was hers. Meeting filmmaker Luca was “super weird”, she says – explaining that the auteur just stared at her.

“I just remember doing a lot of smiling just in case he didn’t like me. I was later told he was just curious so we’ll go with that,” she laughs. Though she is an only child, attention isn’t something Jordan is used to. She received a lot of it as a baby but now she feels she doesn’t need it. “It’s a lot right now and I’m like ‘woah’ turn it down guys, I’m not that popular. But everyone has been super helpful from my parents to my best friend of 14 years, Olivia.”

“I’m super, super-duper happy about everything that’s going on with the change. I’m super excited about it. Truly”

Her favourite part of her whole experience was exploring the dynamics between a black father and daughter, something she sees as a rarity. “When you do see it sometimes it’s such a negative experience, but it has the potential to be so positive,” she says. She mirrored her own paternal bond for the character. “I have the exact same relationship with my father, and we are very close. I took that love I have for him and put it into the show and do it with Scott [Mescudi].”

Her bond with Scott, aka Kid Cudi, grew off-screen too. Jordan says Scott encouraged her with her musical endeavours. “We went for dinner and he gave me advice not only on the acting side but on the music side too. You see him as Kid Cudi and you may see him as a tough hardcore guy but he is such a soft and sweet guy,” she says. “He heard the album before I released it and he loved it. He was so sweet on set. He told me to just keep going. It was so nice.”

Being on set was all-encompassing. While she didn’t have one bad thing to say about working with her cast or her relationship with the crew, there were certainly challenging “tiring” moments. However her colleagues helped her face difficult scenarios like the filming of a disturbing scene where Caitlin is groped while on the dancefloor.

“Thankfully the actual person that did that scene with me made sure that I was super comfortable and said to me ‘okay, I’m not going to touch you too much’, and walked me through it,” she says.

Exploring queerness, consent and mental health on screen is a privilege to Jordan who is proud of her generation’s ambitions to shake up the status quo. “I’m super, super-duper happy about everything that’s going on with the change. I’m super excited about it. Truly,” she adds.

Jordan Kristine Seamón has a lot to offer now that her career has been catapulted. She wants to release more music and dive further into acting. Life is going to be very different for her now. “You get a lot of attention in this position. People bring you food, water and hold umbrellas for you and it’s a lot, but I’m getting used to it.” With this stellar performance, she’s sure to become well-acquainted with the perks of success.