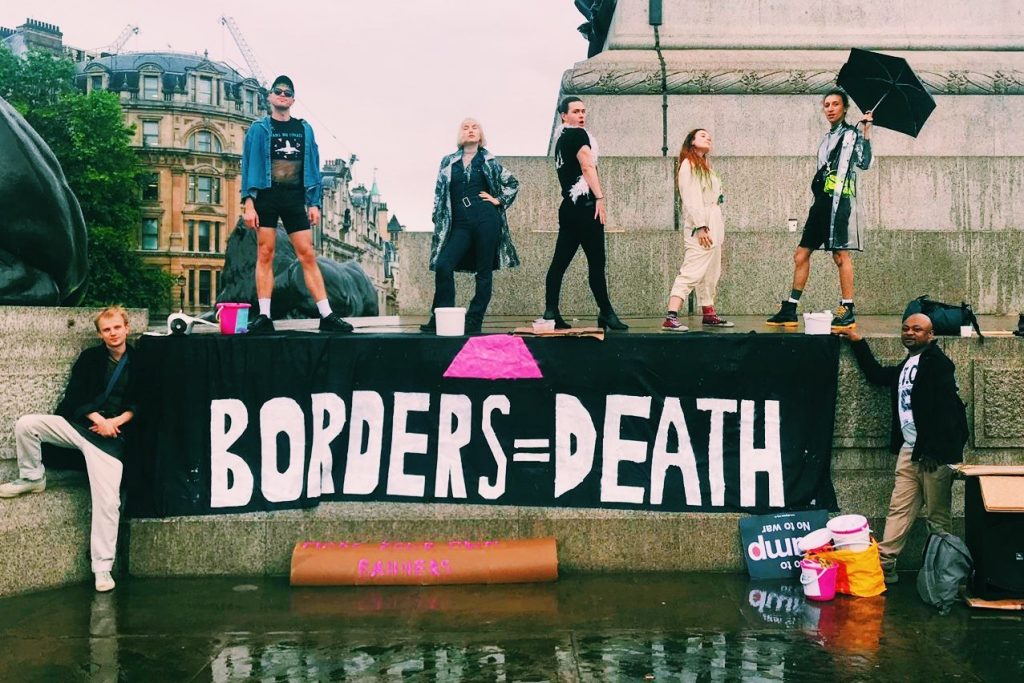 Image courtesy of Lesbians and Gays Support the Migrants (LGSM)

In the run-up to British Airways (BA)’s 100th birthday this August, the airline ran an advertising campaign centred around 100 “love-letters” to Britain from staff, celebrities, and the public. In response, Lesbians and Gays Support the Migrants (LGSMigrants), a direct action group which works to resist borders and deportations, sent BA 100 letters from migrants, former and current BA staff, BA customers, politicians, artists, anti-racist organisations and activists, all asking BA to end its contracts with the Home Office and to help stop deportations. Drag queen Helvetica Bold went to BA’s headquarters in London in an attempt to deliver the letters by hand. We put an ad hack on the London Underground, planted a Tinderbot in airports, disrupted an Airlines UK industry dinner and invited ourselves onstage to join BA’s CEO at the launch of BA’s centenary exhibition in London’s Saatchi Gallery, all to encourage BA to stop deporting people on behalf of the British government. As the Institute of Race Relations puts in its letter, BA “remained unmoved”.

Deportations are brutal and dehumanising. The Home Office holds contracts with commercial airlines such as BA in order to deport people to countries they may have never lived in, where they may be at risk of violence and death, without notice and without access to legal representation. Families and loved ones are separated; lives are destroyed. According to The Guardian, individuals being deported are routinely put in shackles and restraints for hours on end and prevented even from going to the toilet in private. In 2010, Jimmy Mubenga was “unlawfully killed” as he was being restrained by three G4S guards on a BA flight that was to deport him to Angola. BA has yet to investigate Mubenga’s death.

We started our 100 letters campaign because at LGSMigrants, we believe in ending all deportations. Letter-writers including Mercury Prize-nominated musician Cassie Kinoshi, feminist punk band Big Joanie, academic and writer Dr Maya Goodfellow, playwright Sabrina Mahfouz, and actor Eleanor Matsuura, have joined us in calling on BA to stop this inhumane and unjustifiable practice by refusing to take contracts from the Home Office. Whilst at LGSMigrants we stand in solidarity with all migrants, in this campaign we’re calling out BA’s hypocrisy in sponsoring Pride celebrations and using the rainbow flag in its logo at the same time as deporting queer migrants. BA has claimed that it is legally obliged to hold deportation contracts with the Home Office in line with the 1971 Immigration Act. However, after pressure from LGSMigrants and others, Virgin Atlantic cancelled its contract for deportations with the Home Office last year, and the Home Office has not taken any action against the company. If Virgin can stop profiting from deportations, so can BA.

The 100 letters we’ve sent BA show that if the company doesn’t stop deporting people, as Chantelle Lewis of Surviving Society podcast says, it is “going to have a problem”. Charlotte, one of BA’s customers, writes, “Before this [campaign], I did not know you facilitated deportations. I have travelled with you before, and enjoyed the experience, but I cannot in good conscience do this again for as long as you support this unjust practice.” Quoting BA’s own campaign, David Lammy MP puts it, “In its centenary year, the question our national carrier faces is whether it wishes to truly represent ‘the best of all things of British’ – of British fairness, morality and due process and end its part in deportation flights, or whether it will continue to play its part in this shameful process.” In the words of Hannah Jones, by forcing people onto its flights in the pursuit of profit, BA is “quietly finding [itself] on the wrong side of history.”

With these 100 letters, we are urging BA to cancel its deportation contracts with the Home Office and to challenge the hostile environment, the British government’s policy of brutality towards migrants. Help us to put pressure on the airline: share the 100 letters on Instagram, Facebook and Twitter, tweet your support for the campaign to@British_Airways with the hashtags #DearBA #BA100 #stopdeportations – make sure to tag us @lgsmigrants – and let the company know what you think of deportations! It’s time for BA to open those 100 letters, to listen to those who know the damage deportations cause, and to take a stand in the fight to stop deportations. And we’re not going to leave BA alone until it does.