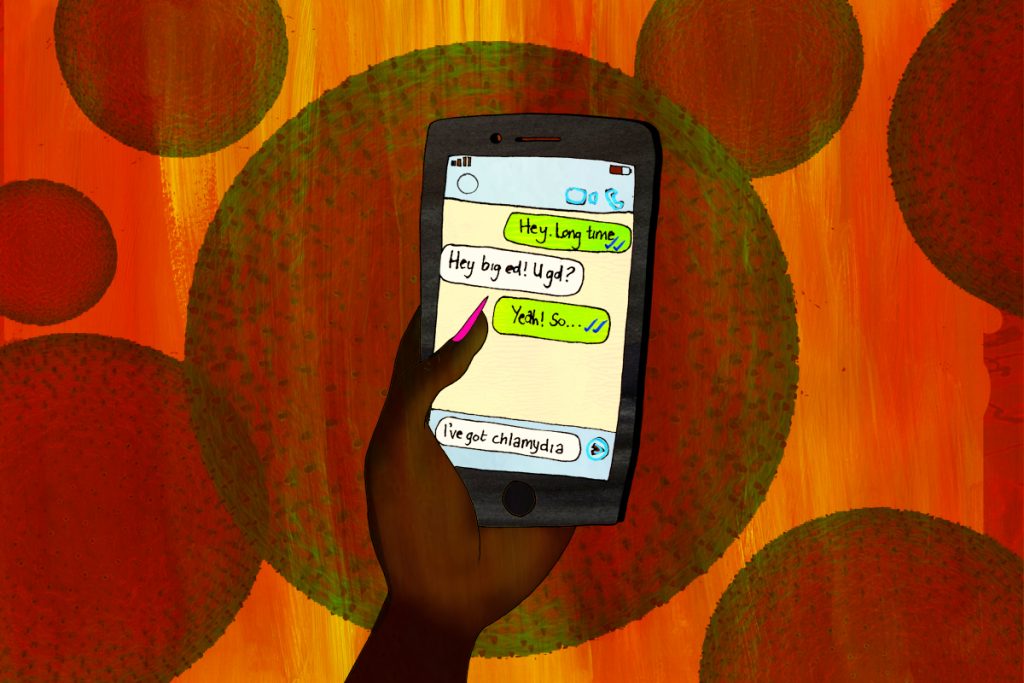 Chlamydia is the most prevalent sexually transmitted infection (STI) in the United Kingdom and one in 10 sexually active young people are thought to have it. That being said, I still couldn’t believe it when I did a routine test and it flagged positive for chlamydia. The treatment itself was a breeze, a three-day course of antibiotics. What was difficult was informing everyone I’d slept with in the last three months that they’d possibly been exposed to it and needed to get tested as soon as possible. A significant part of me wanted to know which one of the seven people I had come into contact with gave it to me.

According to sexual health doctor Caroline Cooper, the rates of STI increase year on year in the UK, with about 220,000 new cases of chlamydia each year. Chlamydia’s so prevalent partially due to its lack of symptoms in most people. A person can have chlamydia for months and not notice until they have some of the more severe complications once the infection progresses through the reproductive system. It can lead to infertility, and even reactive arthritis, a type of inflammation which causes joint pain along with making it uncomfortable to pee and blink.

Chlamydia is super common in people under the age of 25, but it’s not certain if this is because most testing is targeted towards this age bracket or if there other factors at play. The Health Protection Agency says that the peak age for a sexually transmitted infection is 19-20 for women and 20-23 for men, which just about lines up with my experience, as I’m currently 20.

I think the crux of why chlamydia is spread around so efficiently is because detection services have a long way to go in terms of being accessible. Getting an STI check should be a lot easier than it currently is. Going to a sexual health clinic can take what seems like an unreasonable amount of time out of one’s life, time some of us cannot afford.

That being said, I was glad when I heard about Sexual Health London’s at-home test kits – I got one almost immediately. It was a simple process throughout, with each step taking very little time out of my day. When I found out later from that same test that I had chlamydia, I got same-day delivery for my antibiotics, everything free of charge. The service was also super discreet, which I imagine would be very useful to anyone who isn’t an oversharer like me. Of course, I’m very privileged to live in London where many services like this one exist, but I really do think that at-home STI test kits should be available everywhere.

“When I found out later from that same test that I had chlamydia, I got same-day delivery for my antibiotics, everything free of charge”

STI testing should be easy, discreet and accessible to all. There were still some bumps along the road in my at-home screening, like the fact that after my positive result I was prompted to email all my partners from the last three months. I opted to avoid that medium, and instead called or texted everyone who needed to know.

Currently, there are only two reliable ways to stop the transmission of chlamydia: barrier protection and abstinence. I won’t advocate abstinence as a sensible method of STI prevention, because when has that ever worked? As for barrier methods, it’s going to be a long cultural journey to get people more comfortable with using dental dams and condoms during oral sex, but we have to start somewhere. Right now there’s a national shortage of dental dams in clinics, but it’s also fairly simple to make one from a condom.

We need more widespread encouragement of safe oral sex. We need better signposting for sexual health care and we need to be thinking of more ways to make these services as inclusive and accessible as possible. I ended up doing my STI test not because I had any symptoms, but because it suddenly seemed like a convenient thing to do.