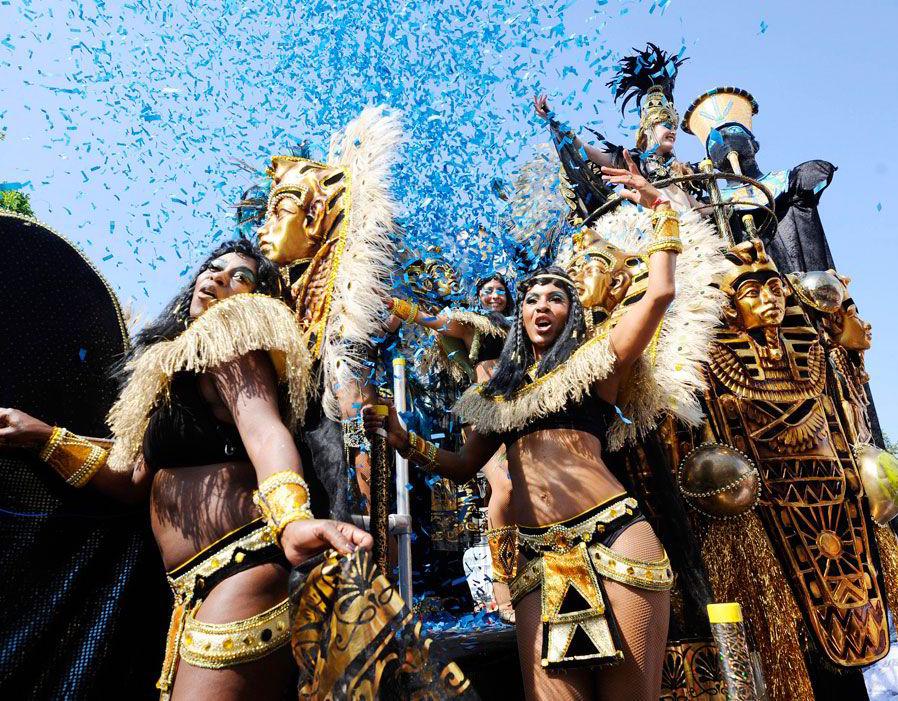 Carnival starts in the cold months at the end of the year. When most people are consumed by Christmas, and August is nothing but a distant memory, there are groups of dedicated people tucked away planning the following year’s parade.

This year will be my seventh on the road with Paraiso School of Samba, and the prep started months ago. For me, the excitement really starts to kick in with the new year. Each January, as all the members return to the weekly samba classes, we begin to speculate about the year’s theme and costumes.

The prospect of joining thousands of people dancing in the streets to celebrate Caribbean culture and London’s melting pot of diversity carries me through the year. From May, the carnival prep picks up pace – we have a costume launch party and then monthly events right up until August.

“I am bold, confident, proud and sexy because of carnival”

This year’s build-up has been extra special as I’ll be parading as Rainha de Bateria (Queen of the Drums). In a samba school, this is one of the top positions a dancer can hold. After winning the competition in June I’ve been on such a high.

One of the most exciting things about carnival for me is the costumes. There is no better feeling than stepping out in the most elaborate and beautiful outfit with scores of your friends. Everywhere you look someone is glistening under the sunlight and the vibrant colours chase away London’s grey. It’s so special and removed from what we wear and how we act normally. It gives me permission to embrace a side of myself that once lay dormant. At carnival, I am bold, confident, proud and sexy and, because of the festival, I am also those things for the rest of the year.

This year my beautiful costume has been designed and made specifically for me and it pays homage to my samba school and the bateria (drummers) I have the honour of dancing in front of. Costume making is usually a team sport – there are 10, 12-person sections in our samba school each with a different costume. That’s a lot of glue, sequins and feathers. Our carnival base is teeming with volunteers putting the finishing touches to outfits and making our float. I’m really proud to parade with one of the only remaining groups who still manages to put an elaborately decorated float on the road. On Monday (tomorrow), look out for the pink train carrying at least 10 people making its way from Westbourne Park to Ladbroke Grove.

On carnival weekend, everyone on the road is family, when you pass another band waiting with their truck, you exchange looks, laughs and sometimes a little wine. Everyone cheering you on the sidelines feels like a personal supporter. We are all connected, we all came out to celebrate and enjoy. Carnival was started 53 years ago as a community movement to help bring a racially divided country together, and that sense of community is still strong. In the face of negative headlines from certain corners of the media, thousands of people will parade along 3.5 miles of West London over the bank holiday weekend. All these groups are volunteer-led and rely on their community to put the show on the road.

That familial feeling runs deep at Paraiso. We often refer to each other as brothers or sisters and we look up to matriarchs within the school who have become everyone’s samba mum or aunty. Just like any family, we laugh, cry, argue and love. The sense of belonging to something greater than just you is so special. We come together – an incredibly mixed group in terms of race, age, gender, profession – and bond over this shared passion.

For me, Notting Hill Carnival is about tolerance and acceptance. Everyone is welcome to take part and bask in this celebration of Caribbean culture. And as a mixed-race women of Caribbean and British heritage, it’s affirming for me to see a blend of my cultures on the street. The fact I parade with a Brazilian group further highlights the shared community of carnival and the collective spirit of the African diaspora. As the Jamaican national motto goes: “Out of many, one people.” That’s very true at Notting Hill Carnival. See you there.