When bailiffs arrived at Latin Village, the community stood up

gal-demPolitics
As law enforcement close in on Latin Village, the stakes to save the market and community hub have never been higher. 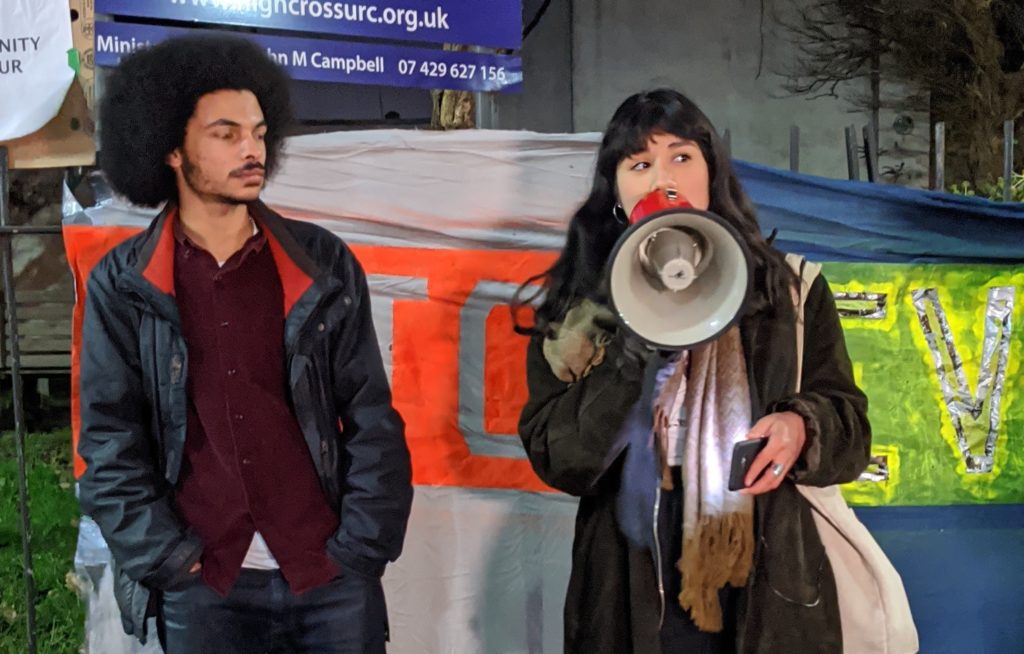 On 24 January, a panicked tweet appeared on the Twitter feed of the Save Latin Village campaign. “URGENT,” it read. “Bailiffs currently carrying out evictions @LatinVillageUK – support needed ASAP”.

The message marked a critical escalation of stakes in the battle to save Tottenham’s historic Latin Village, a market home to 60 odd working class, Latinx traders since 1901. The Latin Village – popularly known as Pueblito Paisa – not only serves as a vibrant community hub but also a rare and vital UK pocket of Latinx culture that acts as a beacon to members of the diaspora looking to connect with each other and celebrate their identities.

For over 16 years, campaigners have fought to preserve Latin Village and its extended community. The arrival of bailiffs on Friday, without notice, is a signal of the fight reaching a potentially devastating climax. Although activists managed to repel the bailiffs, their presence was a potent reminder of just how little time is left to save the space. Which is why around 50 demonstrators braved icy January temperatures on Wednesday, gathering outside a church where Haringey Labour councillors were meeting, to protest the latest developments that have brought the UK’s last Latin market to brink of extinction.

“It means so much to have everyone here in solidarity and to show these institutions that the communities are speaking and this is what we want,” said Save Latin Village campaigner Javie Huxley, welcoming demonstrators via megaphone after recounting the events that led up to the emergency gathering. “We’re saying no to social cleansing and yes to our beautiful community hubs.” Everyone cheered.

Last January, the secretary of state signed the compulsory purchase order (CPO) for the site of Latin Village, giving the green light to developers Grainger to obtain the lease from Transport for London, who own the land it sits on. Under Grainger’s vision, the 188-year-old market would be razed and replaced with 196 luxury apartments, with an added 40,000 square feet of space also put aside for retailers. Traders will be out, with no real compensation for their lost livelihoods.

However, there is one body who can prevent the development going ahead: Haringey Council.

Despite being the first “Corbyn” Labour council in the UK, led by self-professed socialist and senior Momentum official Joseph Ejiofor, the local authority has proved no ally to the Save Latin Village campaign.

Instead, they’ve repeatedly blocked any attempts to preserve the space as it is and steadfastly refused to take opportunities to legally back out of the deal with Grainger, most recently by rejecting a scrutiny review by their own colleagues that found breach of a legal agreement known as Section 106, designed to protect traders.

The review highlighted a huge conflict of interest two consultant firms hired by Grainger to oversee market business.  Quarterbridge, the market facilitator which is supposed to protect the traders, and Market Asset Management (MAM) which serves as the market authority (and is responsible for actions like… sending bailiffs) are run by the same person, Jonathan Owen. Naturally, serving as both protector and destroyer breaches Section 106.

But under Joseph’s watch, Haringey Council rejected the report. And that’s why a throng of 50-plus shivering but resilient protestors yelled “Shame on you Joe!” last night. Tensions were running high, and with good reason – there’s a lot to lose.

“I grew up in an area where I didn’t have access to retaining my culture as a Latin-woman,” said Karla, a campaigner of Guatemalan heritage who’s been active in the Save Latin Village movement. “Coming across Latin Village, it made me feel that this is something that needs to be protected. For me, it’s made me understand and accept a lot more of my experience but it’s not just that. It’s also a very big cultural meeting point for a lot of migrants who come over and are very anxious about things like housing and employment”.

Karla said it saddens her that it’s reached the point of protest, that they’ve been forced into more direct action to defend the traders from the harassment they’ve experienced. But at the same time, she said, the council needs to know the fight isn’t anywhere near over. “We’ll do whatever it takes necessary to get the best outcome for the community, for Latin Village. We want to be heard.”

It’s working; a Labour activist called Hilary addressed the crowd with an update early into the protest, bringing good news. MAM are not getting their contract renewed for managing the market from September. This development, campaigners theorise, is what’s lead to an uptick in the harassment they’re enacting upon traders in the Latin Village. “They want to cause as much chaos as possible and recoup their money, before leaving,” said Hilary.

Another win for the SLV campaign has been its ability to foster solidarity between causes.

Kieran Kirkwood, a key organiser in the parallel Save Ridley Road Market campaign that’s happening just down the road in Dalston, East London, explained that they got involved with the Save Latin Village campaign because they have Latin American family and friends. “But also as someone who’s grown up in an area that’s being socially cleansed right now, it’s really important to me that these community spaces are kept alive and defended,” they add.

Kieran shared what the movements have learned from one another. “That developers are moving mad,” they said, wryly. “That they will use the same scare tactics and not to be intimidated by those tactics but that know they show you the developers see you as a threat to their profit. And to remember this is not a job; this is an action for yourself and the community, so make friends and connections between people”.

“Since hearing about the Latin Village, all I can think about is how much it would have meant to me as a small child”

Up at the front, Javie reached for the megaphone again and informed the crowd that the councillors are filing into their meeting. For the next 20 minutes we chant, alternating between phrases like “Haringey Council, shame on you!”, and “Si se puede! (Yes you can)!” loud enough to carry through the drafty stone walls of High Cross Church.

Two police officers arrived and attempted to push their way through the crowd, but they’re foiled by protestors who simply pretend not to notice them and inch closer together, creating a human barrier. Eventually, they slunk away and as the demonstration winds down, Javie invited more people up to share their stories of Latin Village.

“I had no conception other Latin American people existed in London,” says Elara, who is of Mexican heritage and the last to speak. “It felt like I was the only one. Since hearing about the Latin Village, all I can think about is how much it would have meant to me as a small child, knowing growing up that I had tangible access to the community”.

The thought of that small child, and the potential that future children could be born into a world without the haven she found, weighs heavy in the minds of the campaigners as they dispersed for a much-needed pub debrief. For now, the Latin Village remains. The activists defending it won’t give up until the final brick has been removed. But for la lucha to continua, they need more grassroots support than ever before and urgently because if the Latinx community loses, we all do.