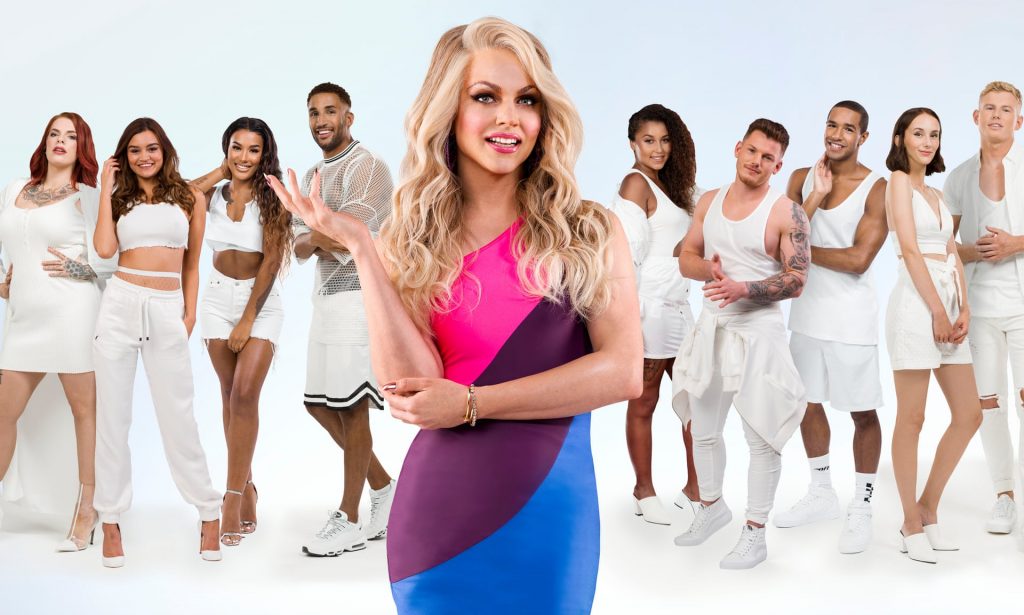 The Bi Life is a brand–new British dating show set in Barcelona that follows the lives of a group of bisexual singletons on their quest to find love. For the bisexual community, who are often erased from the world of reality TV dating, the show has been hailed as somewhat of a breakthrough — an opportunity to break down damaging stigmas about those who date more than one gender. A 2017 study revealed that “bisexual individuals are at a higher risk of poor mental health outcomes compared to heterosexual, lesbian and gay individuals” so it’s a relief to see a show where bi people can explore their sexuality  without need for justification. What’s more, The Bi Life also provides visibility to the gender queer community via its presenter Shane Jenek (otherwise known as drag queen Courtney Act).

The show first aired on E! a few weeks ago and it’s already had some great feedback. People have said things like “when I watched Love Island I really wished there was an equivalent where more sexualities were expressed… my wishes have been granted!”  The Bi Life’s dedication to being inclusive when it comes to sexuality really appealed to me. As a bisexual woman, I don’t often see representations of my sexuality on other mainstream dating shows. I also admire the fact that the show fosters a more supportive environment in the villa since contestants aren’t competing against each other.

I was one of the first people to be shortlisted for the show but decided to pull out of the process at the last minute for political — not personal — reasons. As this is an entirely new show I could only predict what it  would actually be like based on other reality TV shows. I found out about The Bi Life earlier this year after stumbling across a casting call on Instagram and  was instantly excited about it because I’d never heard of a dating show that was so perfectly tailored to me and my sexuality. I don’t actually have much experience of bisexual dating at all because I rarely come across other bisexual women. Maybe I’ve been looking in all the wrong places but I thought at least this show could broaden my bisexual dating experience.

Generally speaking, on reality TV you are already subject to criticism regardless of your race. You’re entering a world where drama sells, where tears sell and where hate gets more airtime than love – even on shows about finding love. I accepted this from the beginning and throughout the whole casting process, I planned to just enter the show with my happy, loving, authentic self. After all, as a news personality and broadcaster it’s my job to be brave and know that people will always judge me and criticise me anyway.

I remember seeking advice from my mother and she immediately said: “Why would you risk producers potentially framing you to live up the negative stereotypes about black women?”

However, what made me pull out of the process was bigger than me and my confidence as an individual person. It was about how black people, particularly black women, are represented on reality TV as a whole. I remember seeking advice from my mother (who sometimes acts like my momager) and she immediately said: “Why would you risk producers potentially framing you to live up to negative stereotypes about black women? Why would you put yourself in a position where tabloid newspapers like the Daily Mail could get fuel from reducing your strength and passion to the rambles of an “angry black woman”?”

Up until this point I never saw it this way. I never considered the fact that perhaps I was being naive. My behaviour could be faultless but still somehow get edited to fuel negative racial stereotypes. Or I could hardly get any airtime at all because I don’t strictly fit Western beauty standards. And why would I go on a show that could potentially be of this nature?

Look at the treatment of Samira Mighty on Love Island for example. Despite not having much luck with finding a partner on the show, she still maintained a largely gleeful personality and as such it would have been difficult for producers to frame her to fit an “angry black woman” stereotype. Instead, she didn’t get as much airtime as her white counterparts. For example, every single couple that got to spend a special intimate night in the Hideaway was always edited into episodes because it was deemed a special romantic occasion. However, Love Island producers deliberately didn’t include Samira’s night in the Hideaway even though many viewers and contestants longed to see her in a happy couple from the very first episode.

As a response to Samira’s treatment in the villa, actor and writer Susan Wokoma spoke out on Twitter about her portrayal as a black woman on reality TV. “I remember there was a scene where we all got to phone home,” Wokoma explained.  “They showed everyone talking to families. Everyone. Apart from me.” She went on to conclude that “that’s why I don’t watch #LoveIsland and I feel anxious whenever I see a black woman (not mixed race, not racially ambiguous – BLACK ON BOTH SIDES) in these shows. The producers generally don’t think we’re interesting and have no desire to humanise us.” She also went to explain how producers included a clip of her having a go at a fellow contestant who’d “barked” at her, but decided not broadcast a scene where he’d been telling racist jokes. “I was ‘applauded’ for my ‘calm’ and basically absorbing his toxicity when they actually should have stopped him dragging me around. So as a black woman your only value is taking shit and/or being ‘sassy’.”

It’s important not to paint all TV producers with the same brush, since I’m sure there  are many decent ones out there. However, hearing stories like Susan’s made me fearful about going on The Bi Life as a black woman. So fearful that I dropped out.

Race should never be my reason to pull out of a seemingly exciting and refreshing dating show. My reasons for pulling out should have only been personal, but unfortunately they were political. I shouldn’t have to fear potentially putting myself in a position where I have to dismantle stereotypes whilst simultaneously trying to date people on TV.

Who knows? Maybe in the future I will be as optimistic about the “political” as I am about the “personal” and go on a dating show after all! Maybe I will just not care and trust that the nation will see through any negative racial framing. But what I do know for sure is that reality TV shows should be more diverse — not just with the contestants, but also with the producers, casting directors and decision-makers at the top. If this were the case, then maybe the BAME people that do make the cast wouldn’t feel like their race could be a cause of criticism.