Why women of colour should go canvassing 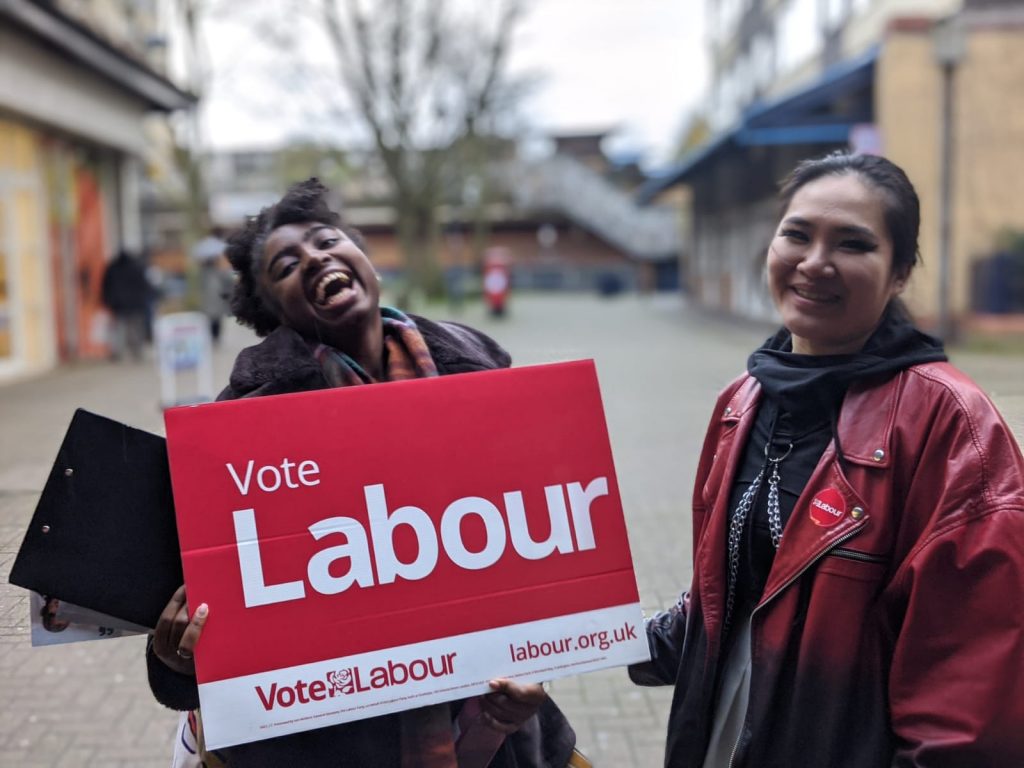 This was the start of the conversation that hammered home why it is important that black women like myself go out canvassing. Imani*, who had been a vociferous Labour campaigner in the past, opened the door to tell us that she, and the four other voters in the house (presumably her adult children), would no longer be voting for the party. She felt she had been let down by her local MP. Initially, I wasn’t sure what to say.

The first time I went out canvassing for the Labour Party was last Sunday. Before I set out, I knew that canvassing was ultimately something that was supposed to be fun, but that didn’t stop me from having a spike of anxiety the night before about my political knowledge. I spent a while reading and re-reading the manifesto to make sure I was well-versed in the policies of Labour’s that I thought the residents of Battersea might like to know about.

I was anxious for another reason too. As a young black woman, would I be taken seriously at the doors? Could I legitimately be expected to change the mind of a Brexit Party voter if my appearance was something that already prejudiced them against me?

Battersea’s MP, 43-year-old Marsha de Cordova, is a bit of a local legend. Elected in 2017, she scraped past the Tory’s Jane Ellison, who had held the seat since 2010, by 2,416 votes. Prior to this election, Jane had held a majority of almost 8,000. Marsha, a black woman who is the shadow disabilities minister for Labour, is best known for her campaigning around disability rights. She herself is visually impaired and has spoken at length about how her experiences in parliament have been affected by this. Today, she is launching a new “Breaking Down Barriers” manifesto, which is expected to tackle discrimination and restore protections for disabled people and their families. All in all, she is a strong candidate worthy of support, and by most accounts, has done a lot for her local community.

It felt good to be out door knocking for a black woman – someone whose politics I truly believed in and could defend without compromise. It was researching Marsha that gave me the confidence to turn up to the Tesco Express where the canvassing group were meeting, and immediately get swept up in the process.

Labour’s canvassing appears to be a solidly organised affair. There is a website where you can see who is canvassing where, with priority events labelled for particular “marginal” seats like Marsha’s, where there can be as little as a few dozen votes between candidates.

When you turn up to the meeting spot, you’ll find people with “boards”, which lay out where exactly you will be door-knocking, the names of the people living there and their voting intentions. It was explained to me that at this stage in the campaign in Battersea, you’ll rarely be knocking on a hard Brexiteers’ door – it’s more about making sure Labour voters are sending off their postal votes, are actually going to turn up on the day. It’s also a chance to check in with people about any local concerns or queries that they hope their politician might be able to help them with and connect them with their local MP.

Armed with a clipboard, which had Labour flyers, posters and a “crib sheet” laying out some key policies, I set off with my “board”. Alongside three women and two men from a diverse range of backgrounds (we looked like a literal university prospectus – black, Jewish, East Asian and white), we were tackling a local council-run tower block, in which, we were told, we were likely to find mainly Labour voters. As a first-time canvasser, I was paired with one of the men who had plenty of experience on the campaign trail.

The first few door knocks were petrifying. I stood silent until I saw the rhythm of the conversations that my co-canvasser was having. “Hello, my name is Michael, I’m a volunteer for the Labour party, can we count on your support in this election?” Generally, the reaction was a quick smile, nod and an enthusiastic acknowledgement that they were indeed voting for Labour. A couple of people wanted to speak to Marsha directly about some issues they were facing so we took down their numbers. The odd person couldn’t vote or hadn’t registered. A lot of people didn’t open their doors.

And then there was Imani. A passionate therapist from East Africa, she explained that she had gathered, she believed, 5,000 votes for the Labour Party from the local Battersea community. In particular, she had mobilised East African voters from Somalia, Ethiopia and Sudan. But she didn’t feel that, after Marsha had been elected, anything had been done to support her community. She spoke about her sons being afraid of violence, “too afraid to go into the local Tesco” because of a recent shooting, and many Somali young people struggling to find jobs. Marsha, she said, hadn’t taken the time to call her, and had been dismissive at a surgery. There was no changing her mind – she told us – because she would not be voting for Labour again. Even though she did love Corbyn.

“She told us that she wished Labour would encourage more East African people to door-knock, that it made a huge difference to have people from your background reflected on your doorstep”

Crucially, however, she was pleased to see us at her door because even though we weren’t East African, we were black women. We listened and listened, suggested that she read Labour’s Race and Faith manifesto, explained to her that even though she might have felt let down, with a Labour government in power rather than just having a local Labour MP, a lot of the concerns she had around jobs and mental health provisions for black people could start to improve. She told us that she wished Labour would encourage more East African people to door-knock, that it made a huge difference to have people from your background reflected on your doorstep. People who can intimately understand your concerns rather than just be understanding of them.

By the end of our conversation, she happily passed on her number. She added, smiling, that she would probably be voting Labour, and that the diversity of our group was beautiful to see. It’s cheesy, and it’s not the ultimate solution to getting voters from a variety of backgrounds to the polls, but still, it was a reminder why I was glad that as a black woman, I had decided to go out canvassing.

Join the gal-dem going canvassing with the Labour party this Sunday.