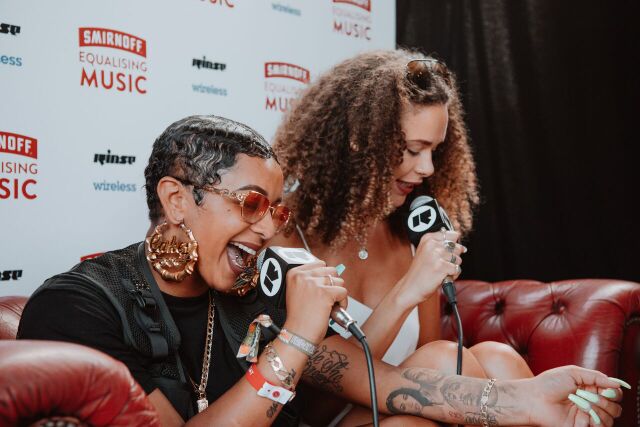 Earlier this year I wrote an article about why Wireless Festival does not reflect how far women have come in the last century. My urge to interrogate gender inequality at festivals erupted after witnessing yet another line-up that was disproportionately made up of men. Frustrated and tired, I’d simply had enough. However, after learning about the Smirnoff Equalising Music initiative, it was as though a flower of hope immediately started to blossom inside of me – I finally felt like something was being done. Supported by Wireless, Smirnoff teamed up with London’s pioneering underground music station Rinse FM, to curate an all-women line-up with the intention of bringing female talent to the forefront – talent that was otherwise unfairly underrepresented. Julie Adenuga and Emerald Lewis hosted this boundary breaking line-up that featured artists and DJs such as Lady Leshurr, Paigey Cakey, Trillary Banks, and The Grime Violinist. This was my chance to facilitate a needed conversation, led by women, about the future of gender equality at festivals. The atmosphere backstage was electrifying — you could feel the girl power in the air. I spoke to the artists about fears over whether The Smirnoff House stage was enough, scrutinising the people in power, and we jumped into our imaginary time machine to envision what gender equality at festivals will look like in 10 years time.

gal-dem: So we’ve got the Smirnoff House stage which has an all-female line-up, do you think this is enough? What more can we do?

Paigey Cakey: This is a great start, I got to big up Smirnoff and Rinse for putting on an all-female line-up because this has literally made history. But I feel like this shouldn’t just be a one-off at Wireless, this should be at every single festival. In fact, I feel like every festival should have the same amount of male artists as female artists. I feel like every show should have the same amount as male artists as female artists. Even every single collaboration. There are so many lit females but we’re just not given the same platform and chance to speak up, for people to even hear us.

Trillary Banks: Well if there were three or four big headline acts, remember headline acts is when you get to a certain stage. So over the next 12 months me and certain other females get to that level then we will be headlining at places like Wireless, we will be main attractions to Wireless and not just on the side stage. So I think it’s for us to push as well and it’s for other people in the music industry to give women more opportunities to be able to get to where they need to get to.

Emerald Lewis: It’s a tough one because on one hand, it’s incredible to be a part of something so positive when it comes to women being together as a response to the lack of female representation on the original line up. However, in another sense, why are we still having to do this?

Emerald: It is bittersweet. We should be on the main stage in our rightful place. We should have the exposure that we deserve. But until that time, I am really happy to be a part of something like this and I think it is important.

What more do you think festival organisers could do to help equalise music?

Emerald: How many women are there curating these festivals? How many women are on that committee putting the mainstage line-up together? I don’t know. The thing is I’m completely ignorant to it, I will hold my hands up and admit that I don’t know what it’s like up there and a lot of people don’t and I feel like that’s probably the root of the problem. What else could be the root of that problem? It’s the people curating festivals that are overlooking females because they are either not aware of all the female talent out there or they don’t trust it because they don’t think it’s going to sell tickets. 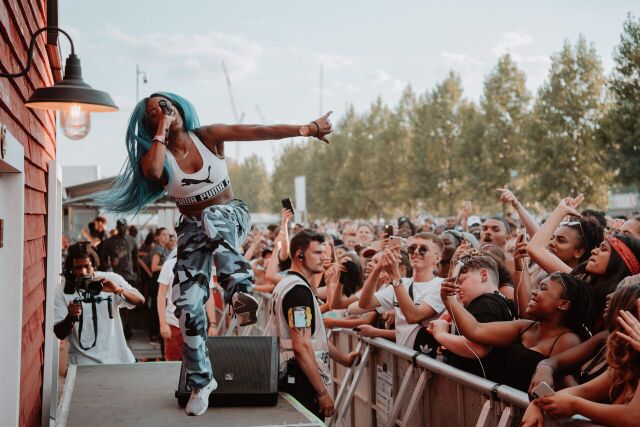 Do you think radio hosts and DJs have a duty to promote more female talent and bring more females to the forefront? Do you think it’s their responsibility to do that?

Julie Adenuga: I’m here because people helped me out and gave me the opportunity. For example, Rinse FM gave me the opportunity to be on radio when I had no radio experience. Me and Sian had no radio experience, we hadn’t even touched a CDJ before. So my whole career people have been supporting, I think now I see that the conversation has steered to “where are all the women in our musical spaces” and I think people are definitely doing more to help women. Rebecca Judd is a good example: she’s naturally an incredible presenter, so at Beats 1 when I had the opportunity to have a show that had more than one presenter, I said I want Rebecca Judd now!

Jyoty: 100%. I’ve caught myself multiple times on my own radio show, I’ve gone home and I’ve looked at the two hours of music I’ve played and I’m like, “wow I didn’t play a single woman”. And I would then go back on air the next week and apologise and call myself out for it because I have to practice what I preach. And it goes beyond DJing, there is not a lot of female producers out there, we need to play productions by females so that other young females at home are inspired to go for it.

Emerald: I wouldn’t say it’s their responsibility but I would say it’s important to champion both men and women and I think to look narrowly towards just one sex in either respects is wrong.I’m doing a panel on my radio show talking about this music stage and how it can be viewed as tokenistic – we don’t want to be a sideshow. But I’ve got a mixture of male and female panelists because feminism is about unity between both sexes. So this is why when I do this panel I want a male’s perspective as well as women’s. I want the same speech that we’re preaching to come out of a man’s mouth. So that’s where I think the work needs to be done. For radio hosts and journalists, championing unity is what’s next on the agenda.

Emerald, Shy One and Jetss

Why do you think we so rarely see women represented across the urban music scene at the highest level?

Trillary: I feel like it’s because it’s a male-dominated industry and it always has been. So it’s about breaking boundaries because when you’re used to something, it’s change, and some people don’t adjust well to change. So I think the more changes that are made, the more it will become normal. Because it’s such a male-dominated industry that’s why there’s not many females included, it’s always been that way and nobody is really wanting to change it. And the people at the top are probably all men as well.

So do you think there should be a change at the top?

What would you say the hardest thing about being a female artist in a male-dominated industry? And what sort of advice would you want to give to aspiring female artists?

The Grime Violinist: I’ll be honest I don’t actually have a lot of problems with that because I’m the only person doing what I do. I play violin for Grime and there’s no one else doing that. I’m kind of like a big fish in a small pond. I’m in my own lane. To be honest, the reception I’ve had in the grime industry has been good, I’ve had no troubles.

Julie: I do get asked this question a lot but I struggle with the answer because I don’t struggle in a male-dominated industry. I’ve been in male-dominated spaces since I was born, I’ve got three brothers, my dad was in the house. But I do understand when I’m around young women, how men talk to them and approach them. If you have a job and you’re doing your job: own your space. And if anyone has anything to say to you about that then tell them to speak to the person that’s paying you to be there. It’s not your job to justify why you’re somewhere.

In 10 years time, what do you predict gender equality will look like at festivals?

Julie: I think it’s going to be a sick place because it isn’t just gender, it’s everything. It may take a little bit longer than 10 years but I hope that festivals become a space for everyone. And when I say everyone I mean everyone, any person, any soul. I saw a friend of mine who I used to work with at Rinse. Her dad created MobiLoo which are portable toilets for disabled people at festivals because they do not have any. Hopefully, there won’t even be any conversation about marginalisation. If you love an artist you’ll be able to go and watch them without a single doubt in your mind about what’s going to happen when you get there, who’s going to say what to you, who’s going to look at you in a certain way.

What advice would you give to young aspiring female artists?

Jyoty: I would say don’t let anyone stop you, be nice, be fucking nice to everyone. The same people you see on your way up are the same people you’re going to see on your way down and think twice, unfortunately, we are going to be received in a different way. If they catch you slipping it’s different when a guy is being a bit messy but if we’re being messy it’s going to have a backlash. Any decision you make, any person you roll with, how wild you get at events, just think about it. Stand behind your choices and decisions.

Paigey: Bring something different to the table and just know that you’ve got to work extra harder than a guy, and make sure you have tough skin. Because I feel like you’re going to get a lot of negativity at the beginning of your career. At the beginning of your career especially, guys won’t take you seriously until they see your work rate. Have a tough skin, be very competitive towards the scene, not other females. Just keep at it and stay focused.