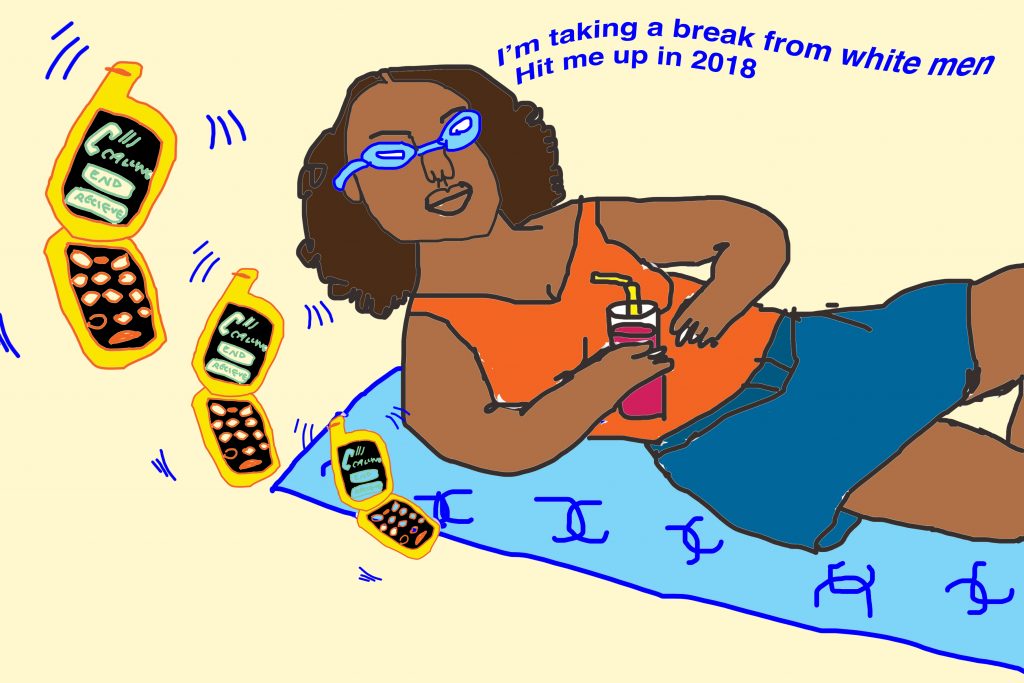 In a wine bar with lighting reminiscent of Hollister, where crates had inexplicably become a substitute for furniture – it hit me, a revelation:

“I think maybe I should stop dating white guys altogether – take a break,” I announced. The conclusion of a long, yet rewarding conversation with my ex-boyfriend’s best friend – an hour-long kaleidoscope of chat-bordering-on-academic-analysis of my previous Woke Men Only articles.

My ex-boyfriend had been in touch to inform me that I was “angry at him for personal reasons” that had “nothing to do with [his] prejudice,” and I just wasn’t sure if I could risk another encounter with someone that denied the scale and scope of racism – both insidious and overt. Racism so seemingly innocuous that it’s undetectable, lying dormant within people without their knowledge.

An attentive waiter refilled our wine glasses and lit a candle. My ex’s friend nodded. “It’s sad but I get it,” he said. Sombre but understanding.

“There’s this one guy I met recently at a party. He seems nice. I’ll give him a chance. See if it’s any better. Any different.” On the barometer of hope, I was less Obama 2008 and more Obama 2012. I wasn’t defeated yet, but my expectations were very much managed.

“It started small. The use of the brown thumbs up emoji on the reg, which I’d always thought of as for us only, like FuBu or the n-word”

It started small. The use of the brown thumbs up emoji on the reg, which I’d always thought of as for us only, like FuBu or the n-word. It was odd. But I let it pass.

Sitting in bed, I asked the question that plagues women of colour everywhere: “Do you exclusively date black and brown women?” He averted his eyes. “Um… yeah. I always have. Erm.”

“I mean it’s fine. I think black and brown women are very beautiful. And you don’t know what you’ve been taught to desire. But there’s a thin line between a type and a fetish. It’s just – have you ever thought about why?”

“Not really. Well – I do have this eye problem. So when I look at white people they look kind of blurry around the edges. It might be that? I can’t really see them.”

Wrong answer. My general nonsense radar was beeping violently like 90s AOL dial-up when your friend called the landline. He couldn’t see white light, and all I could hear was white noise.

Hoping that this would be the last waltz down ridiculous alley – at least for the morning – a parting gift. A debate on the moral compass of Cecil Rhodes and the former colonial state of Rhodesia. A morning reminder that the compulsory teaching of colonial history is a matter of urgency.

“I was tired of being a history teacher, a cultural critic, a spectacle”

“It wasn’t that bad,” he said. I despaired. I was tired of being a history teacher, a cultural critic, a spectacle. Dating shouldn’t be this loaded. I was tired. But I made space for Britain’s colonial amnesia and the canyon-sized dearth in our history curriculum. Not everyone has all the knowledge. And he took the time to Google Rhodesia and concede the next day.

At our next date – in a restaurant so fancy they forbade me a doggy-bag (my leftover ribs had to be hidden in a Tesco bag) – came the straw before the final straw. We were retelling our worst ever nights out.

“So, I got there and there were these four really big, black guys. And I was really intimidated,” he said, unaware and unashamed.

“No. Stop. Right. There. No.” Not again I thought, silently enraged.

I wondered if he’d given any thought to the fact that my dad is a black man.

From the racist Republican to faux-post racialists; sprinkled with the ordinary exhaustion induced by cheaters and liars – I don’t know how much more I’ve got to give. The camel’s back wasn’t broken, it was paralysed.