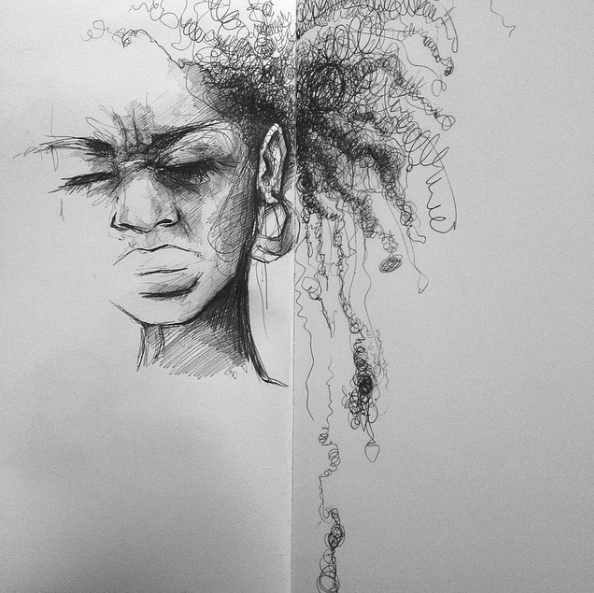 The black British youth are obsessed with light skin and curly hair, but it’s not just them. For centuries light skinned black people have been viewed as more attractive thanks to their proximity to whiteness, and it’s utter bullshit. Two of gal-dem’s contributors weigh in on the viral video from VanBanter that has been stirring up controversy around colourism.

Kimberly Mcintosh: Being spurned by your own race is another burden dark-skinned women don’t need

On a Manchester Magicbus in 2013, an ex-boyfriend told me that mixed-race girls were at the top of his preferred appearance hierarchy. Naturally, it sent me, a medium-to-dark black girl, on a silent self-esteem spiral downward. So I consigned the memory to my mental deleted folder for things no one needed in 2013 – nestled next to Miley Cyrus’s twerk-inspired rebellion and Iain Duncan Smith.

But then YouTuber VanBanter made this dead video, lest we forget that colourism is still alive and well. In an inspired YouTube video that subtly blends general objectification with colourism – our star takes to the streets to ask young black lads what their ideal gal looks like. The answer: light-skins with 3b curly hair and a big back. No dark skins. No black girls like my shoes. His quest to find out whether black British youth are obsessed with “light-skin” girls, or “if it’s just a preference”, isn’t really answered. But I will answer the question here: no – it is not just a preference. Beyond being two and a half minutes of adolescent drivel, this video is a microcosm of misogynoir; the internalised western beauty ideal distilled and displayed.

We can never be certain what we desire and what we’ve been taught to. But it’s not a coincidence that each teen description of the ideal woman is a carbon copy of a hip hop video vixen. Hip hop videos have cast “racially ambiguous” women with traditionally “black features”: a big bum, big lips, large breasts but a small waist, since the early 2000s. In the 2011 BBC Three documentary Music, Money and Hip Hop Honeys, presented by Afghani-born journalist Nel Hedayat, video agent extraordinaire Mike Styles claims he could book Hedayat on to an RnB video, telling her: “the good thing about you is your ethnicity – I’m not sure what you are exactly.” In 2016, we reached peak colourism when Kanye West requested “multiracial women only” for his Yeezy Season 4 casting. Preferential treatment was given to lighter-skinned women.

The boys in the video are reciting from the colonial scripture – beauty is measured in its inches from whiteness. And “black features” are beautiful, but not black on people. The promotion of this aesthetic is racist and dangerous. If young black women internalise racialised beauty standards, it can spawn a debilitating self-hatred. And it has visible consequences. Its why skin-lightening is still a very popular practice worldwide. Its why black women are the least likely to get a response on OKCupid. Its why DSTRKT nightclub refused entry to black women they deemed “too dark”. And it’s sad to see it being spouted by predominantly black boys. Blocking out the messages of the fashion and cosmetic industries is hard enough. Being spurned by your own race is another burden dark-skinned black women just don’t need.

Sophia Leonie: We need to stop the fetishisation of mixed race women – it doesn’t help any of us

I got sent it in a group chat. That video circulating on Facebook. The one of teenage boys talking about the type of girls they like. It’s all seemingly harmless stuff at first glance – VanBanter, a popular young vlogger takes his camera across London, asking boys what type of girls they are into. Their eyes light up as they tell him: “obviously mixed race”; “light-skinned, big back, big tits”; “light-skins and Latinas”; “Coolie hair,  no dark skins”; “curly hair”. And it goes on. Answer after answer; boy after boy, describing their light-skinned girl fetish.

There are several problems with this; several reasons why I didn’t send an obligatory “lol” back.  Firstly, many of the boys talking are dark-skinned. They unapologetically dismiss, disown and disrespect all dark-skinned black women in one fell swoop, arguably revealing an insiduous level of self-hate that is uncomfortable to watch.

Secondly, as a mixed-race woman, there’s a common misconception that this type of appreciation is somehow flattering. It’s not. Aggressive sexualisation of our bodies – whatever our race – never feels nice. The language used to describe women in this video both disrespects and dehumanises.

Thirdly, the contempt towards dark-skinned black women in this video can only further fuel rivalry between women of different shades, which we don’t need. I remember the hostility between the black girls and mixed-race girls in school, the constant “you think you’re too nice?” comments. By the time I was 18 I had chopped off all my long curly hair and donned a uniform of tracksuits in an attempt to appear “more black”, less feminine and to avoid male attention.

The fact that I thought being less feminine and more black went hand in hand is disturbing, but it’s an ideology that has permeated society for hundreds of years, rooted in the 18th Century Enlightenment period, when scientists like David Hume proclaimed that black people were scientifically proven to be inferior to white people because they were more closely associated with physicality than the mind. This thinking still affects us today. A recent study found that mixed race is now considered the most “attractive” race. This simply indicates to me that we are still adhering to this out-dated philosophy – when it comes to black people, the closer to Europeans; the better.

White culture and black culture alike still reinforce this Enlightenment ideology. Hip-hop music videos have often focused on the physicality of mixed-race women, fetishising their bodies only serving to deepen sexist and racist attitudes in society. Today, social media has a bigger part to play. Mixed-race girls almost “own” their stereotype, with selfies and celebratory hashtags, which actually further divide women of different shades whilst giving men the green light to objectify us.  #HashtagLightie, a play I recently performed in, explored this exact issue. The protagonist, a teenage vlogger, is forced to confront the consequences of trading off her much desired mixed-race look.

In a world bombarded with YouTube videos, Instagram pics and Twitter hashtags, the fetishisation of mixed-race bodies is undoubtedly increasing. We need challenge this and discuss the implications for young women, men and society as a whole. That’s why I when I was sent that video in the group chat, I couldn’t laugh out loud. Or laugh at all.