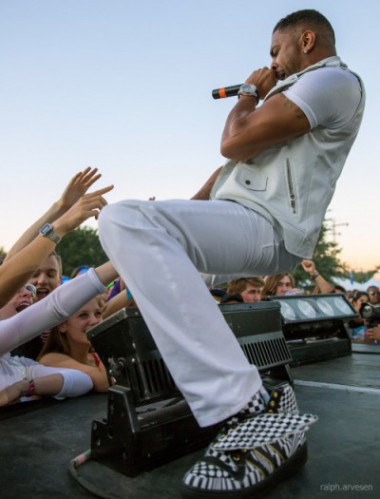 Having grown up in a generation when R&B dominated the charts, before the likes of Sam Smith, Ed Sheeran and The Weeknd, there was Jon B, Joe and Jagged Edge. Yes, it seems that along with the decline of melanated R&B stars beginning with J, the genre’s sexier relative, the slow jam, disappeared along with its counterparts: the slow whine and the slow grind.

Falling somewhere in between soul and R&B, the slow jam is a downtempo, traditionally romantic, more emotional sub-genre that served a great purpose. It allowed young males and females from any background to discover their sensual side, providing a ‘safe’ platform for adolescents to explore their sexuality before Instagram, twerking, booty shots and Miley Cyrus’ vagina were thrust aggressively in their little faces.

Gone are the days where, at the end of the rave, two young strangers could simulate/faux copulate slowly on a dance floor, surrounded by duplicate couples with a side-eye and smirk of support from their mates before sprinting off as the DJ announced the arrival of their mums to a soundtrack of jeering. Obviously, not all was innocent and a local ‘grim’ could occasionally be seen relinquishing herself to suspect digital penetration from a squad of goons in face masks and hoods but, on the whole, slow jams encouraged romantic encounters without degradation.

The Godfather of all slow jams, no slow jam list could be complete without man-like-Marvin. Pioneering the slow jam scene in the 80’s, ‘Sexual Healing’ sparked the transition from organic, instrumental soul to digital, sensual soul produced on the likes of a Roland TR-808 drum machine. The slaps, clicks and triangles featured in songs like ‘Sexual Healing’ were carried right through to the late noughties. Ironically, despite being an iconic soppy love song, it was apparently inspired due to Gaye’s interest in cocaine and sadomasochistic comic books. (This, of course, cannot be attested. The man was most certainly a legend and basically in the same realms of musical genius as R.Kelly and MJ. RIP to the dons.)

First things first: Ginuwine is the realist. Way before Igloo Australia had left her homeland, Ginuwine was the Ronseal of R&B and slow jams/whine. ‘Pony’, as distinctive as Ginuwine’s birth name (Elgin Baylor Lumpkin), captures the essence of an archetypical slow jam perfectly. The fact that he used this animal metaphor in reference to himself/his loins was particularly quirky and actually quite considerate in a biosphere full of ‘bitches’. You really got the sense that he was a courteous bachelor compared to the Bilzerian style bachelors of today. This song also marked the emergence of Timbaland as a successful R&B producer and therefore moderately supports the principle of the slow jam as the mother of popular music; without the slow jam there would be no Timbaland. Case closed.

Pretty much the only ‘white’ R&B artist to gain validation from the 90’s up to today. You can’t really discuss slow jams without mentioning a man like Jon B. Whether he is a very, very, very light-skinned black man or a white man still remains in debate.

(FYI – allegedly he’s Jewish and doesn’t identify as white.) Racial ambiguity aside, no-one can deny his legitimacy in the slow jam game. Unlike Robin Thicke and Justin Timberlake, Jon B had the cool, smooth appeal that mellowed the most gully of guys into starry-eyed sweet boys. Compared to him, the blue-eyed soul boys and girls of today seem marginally akin to Vanilla Ice knock-offs. Skrrrrt.

Having absolutely rinsed the student club scene right up until the mid-noughties, possibly into today (if anyone knows which random UK suburb Joe is next performing in, please email me, I’d like to know), Joe Thomas (surname now absolutely necessary) was fully reppin’ for dark-skinned bald brothers back in the day. Along with Tyrese, Joe set the tone as the side-man who would steal your girl in a heartbeat. (Sorry, Trey.) There was something very special about his lyrical content, simultaneously enticing romantic fantasies and inciting hilarity.No-one quite beats Joe when it comes to slow jam bars. “Show me to the subway, I’ll go down” and “Make your body cream with my sex machine” are particular faves of mine.

2007 signified the end of the slow jam era. Robin Thicke almost signed off with ‘Lost Without You’ before realising that he could probably make a career out of being a bit of a dick. Tank, Lloyd, Chris Brown, Justin Timberlake, Omarion, Pretty Ricky and Musiq Soulchild all released hits and, for a moment, romance had captured the nation once again.

However, I’ll end on the last proper slow jam that I can remember dominating the clubs and radio waves. J Holiday was a sly fox, emerging out of absolutely nowhere and disappearing into obscurity faster than happy slapping. He came, he saw, he conquered the hearts of young delusional girls everywhere before being swiftly replaced by the likes of Lil Wayne and Drake.

To conclude, Drake is not a slow jam star. Drake’s arrival replaced the corniest, cheesiest and softest of all slow jam stars so much so that he is now in a league/genre of his own. Consequently, blame Drake for the death of the slow jam. Our favourite singing rapper we all love to hate.

N.B. This is clearly not a comprehensive list/study. For further evidence email me for an exclusive link to my Spotify slow jam playlist. VIP mature ravers only.