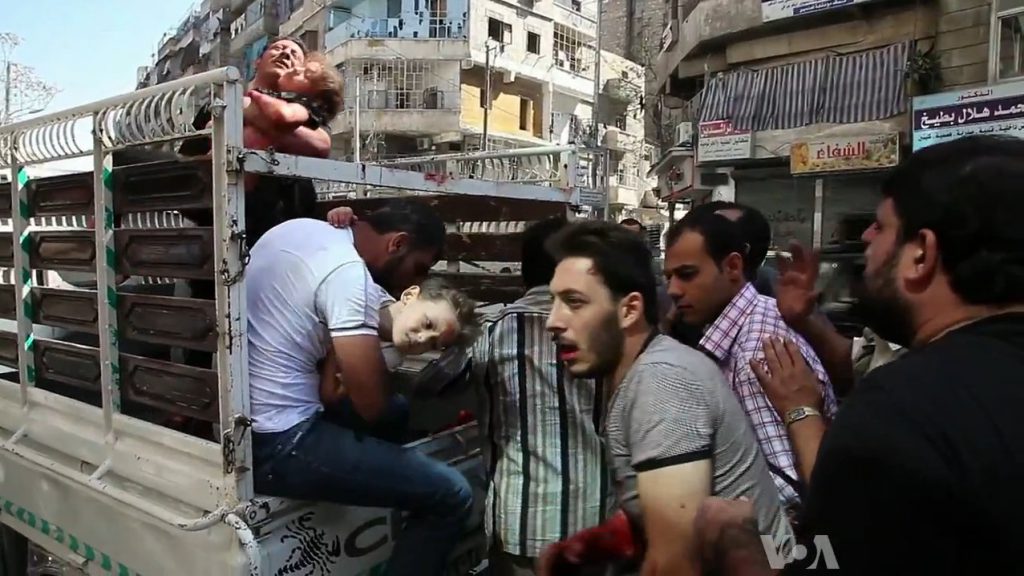 “Washing one’s hands of the conflict between the powerful and the powerless means to side with the powerful, not to be neutral.” ― Paulo Freire

Aleppo was once Syria’s largest city and the heart of the country’s industrial and financial developments. Making it no wonder, that government-held forces have been so determined to retain power over the city. However, during the first year of the uprising against President Assad in 2011, much of the impact managed to avoid Aleppo – where other parts of the country were very much destroyed. Yet, from 2012 onwards Aleppo has become a prime target for rebel groups and has caused total devastation for the people that live there.

Renewed assaults, sieged areas and reneged ceasefires have meant that from the 1.2 million who reside in the city, some 275,000 people are trapped with little access to food, water and much needed hospital supplies. There are also those that have lost their lives in the conflict or fled the area, which the United Nations estimates is around is a further 90,000. Also, many humanitarian agencies such as the Red Cross have struggled to get into some parts of Aleppo that are under siege to deliver supplies and bear witness to the atrocities that are occurring. The city, thus, exemplifies a nation truly at war and is a microcosm of the opposing sides bitter battle for power.

Yet, what I find mostly startlingly, is the world’s indifference towards the quickly rising death toll and loud cry for help from humanitarian agencies and the people of Aleppo. A cry to the rest of the world to act or at the very least, sit up and take notice of their suffering in Syria. Some have even taken to social media to say their last goodbyes as a way to alert us of the imminent threat of death. Activist Lina Shamy, and many others, shared a video on twitter where she shakily lets us know of the probable executions of those who oppose the dictatorship regime led by President Assad. It seems though, her video which received over 31,000 re-tweets, will become another futile attempt to get the world to act.

Whilst leaders have joined together to question why so many civilians have been killed and displaced, especially in the past month, or what more they can do – not much has been done. Canadian defense minster, Harjit Sajjan, who called the events in Syria a “tragedy”, has refused to commit any kind of military involvement from Canada. There have been no sanctions from other superpowers, but ‘neutral monitoring’ from a UN resolution of the evacuation of civilians from Aleppo. Whilst some may call this progress of some sort, many have suggested this resolution is too little, too late and does not offer solutions of how to end the unrest. In fact, there have been obstacles, created by China and Russia, to passing some resolutions that will create truces and ceasefires to help protect the people of Aleppo. But, the pictures continue to flood in of children stranded at bomb sites, displaced families looking forlorn and defeated, and world heritage sites utterly destroyed.

This makes it even more remarkable, where news and evidence of humanitarian crisis’ has caused important policy changes in the past. Take the image by photo-journalist Kevin Carter’s 1993 image of starving child during the Sudanese war which provoked thousands of people around the world to send monetary aid and food supplies to eradicate poverty in Africa. So, why is it that with the Syrian crisis, and more recently the disturbing images which have emerged out of Aleppo, have provoked little action? For example, with the resettlement of Syrian refugees, the E.U has only met 5% of its quota despite the 72,000 places available under E.U law and 12,000 migrants have died trying to cross the Mediterranean. Some argue though, what needs to be avoided is a US/UK style invasion in 2003 in Iraq which caused arguably more devastation, and would by many legal standards be considered a war crime if not led by the West.

So what should we do now? Well, unfortunately there is no easy or simple answer. There are obviously many bureaucratic obstacles and challenges that halt any effort by the countries able to help Aleppo. As well as what seems to be a reluctance to get fully involved in curbing the violence. But, what we should not continue to do is turn a blind eye to the suffering of people for whom we could be doing exponentially more to help.