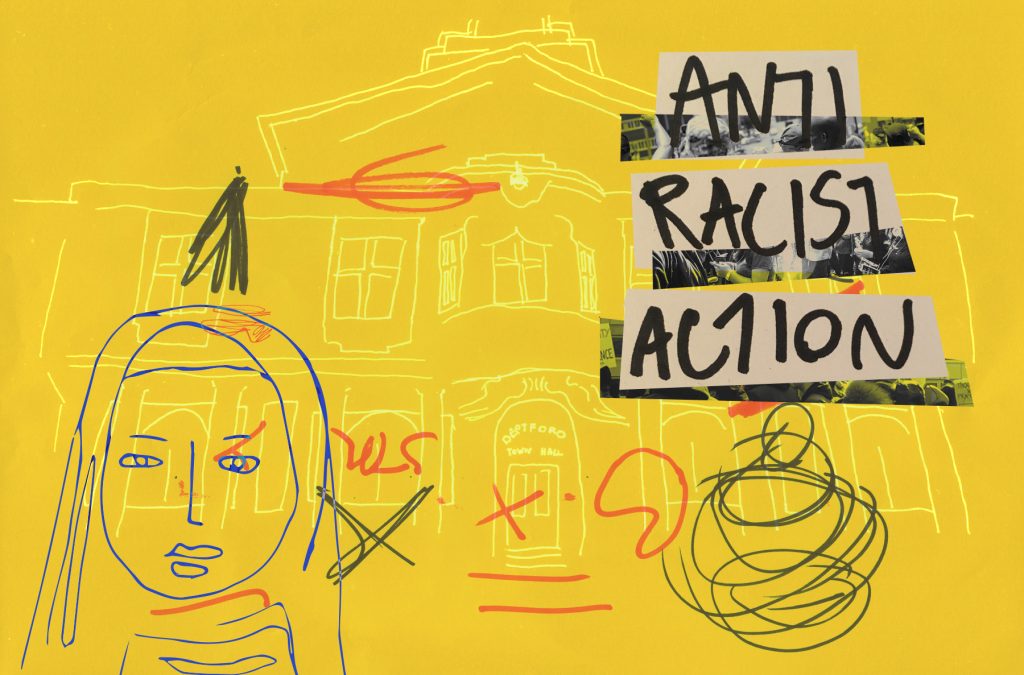 Students at Goldsmiths University in south east London have been occupying a university building since 12 March due to an alleged “hate crime” that happened on campus in the run-up to the university’s student elections.

Hamna Imran was campaigning to become Goldsmiths’ Education Officer when her posters were torn down and defiled with racist graffiti. Students have deemed the university’s response to the incident inadequate.

The occupation at Deptford Town Hall started after a protest organised by students, who demanded the release of CCTV so the person who vandalised the posters could be found.

Fiona Sim, a second-year Anthropology and Media student, has been part of the action at the university.

“It was racially motivated,” the 22-year-old said of the graffiti. “It was a hate crime… The more we talked, the more came out about how angry we were about so many different things – about all the incidents of racism over the years, about how our department treats us, about how Goldsmiths is institutionally racist.”

The students claim that their experiences since being in occupation at the university haven’t been easy. They allege that they were locked in the building over the weekend with the heating turned off, and threatened with police presence.

“The university responded with force and intimidation,” said Fiona. “For people on the inside, they were in there for three, four days without contact from the outside world. It was very difficult for them and many of them did want to leave because essentially they were trapped in one room with one toilet next door… They had limited food supplies. It was to the point where we had to create a rope-pulley system to get food in and out of the building.”

Day 7 – Deptford Town Hall Siege has ended after pressure + support for #GoldOccupy activists. Thank you for you support and solidarity – especially Mona Mounir at the SU – come say hello!
The occupation ends when the demands are met in full #MyRacistCampus pic.twitter.com/tl1k6bEr7J

A spokesperson for Goldsmiths, University of London, told gal-dem: “We are proud of our diverse and inclusive community and prejudice of any kind has no place on our campus.

“The building re-opened on Monday and student protestors are free to come and go within usual opening hours.

“Heating in many of our buildings is automatically turned down over the weekends, to conserve energy. We overrode this setting on Saturday to increase temperatures in the affected building.

“We take the safety of all our students and staff very seriously and consulted with London Fire Brigade who were content with our evacuation arrangements while the affected building was temporarily closed.”

The building was reopened on Monday 18 March, and students plan to stay in occupation until the demands of their occupation manifesto (screenshotted below) are met by the university, including an institution-wide strategic plan on how the university will tackle racism and the realities of life as a BME student at Goldsmiths.

Goldsmiths Students Union said in a statement released last week that they were supportive of the occupation and that they would continue to pressure the college to improve their processes.

The statement read: “Racism has no place in our university and the university’s structures should reflect this with speed and determination.

“The officers will also continue to use our positions within various committees to ensure that the demands of those students who are protesting are heard and ensure the officers are on hand to support those protesting students throughout the occupation.”

Goldsmiths has a history of anti-racist activism. In 2015, welfare and diversity officer Bahar Mustafa was charged with “sending a threatening communication” for tweeting #killallwhitemen. She later had the charges against her dropped by the Crown Prosecution Service.