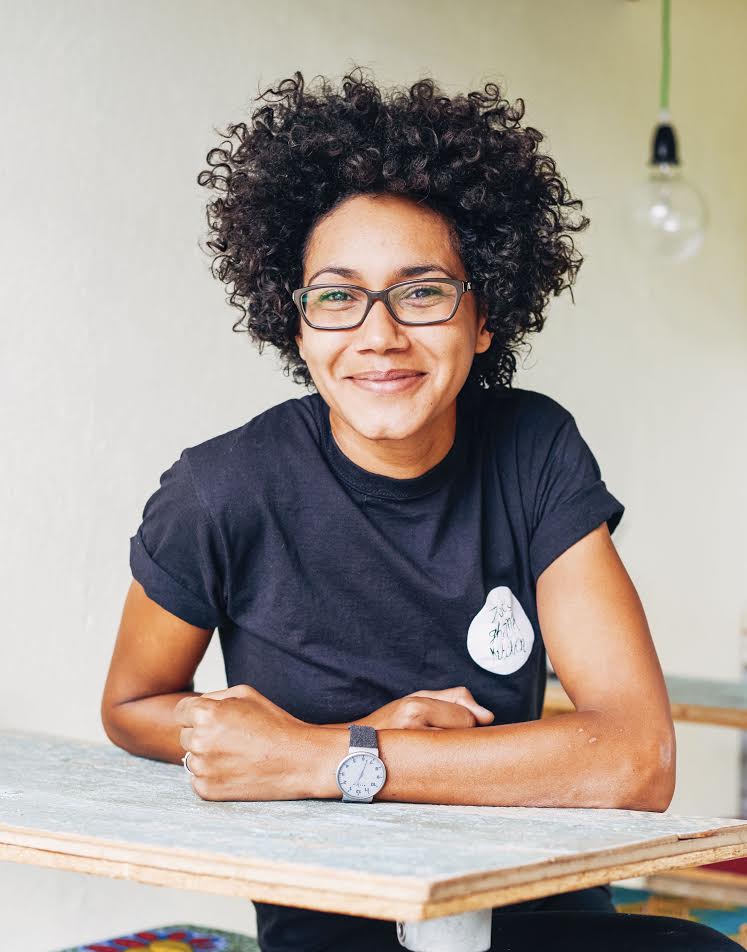 Zoe Adjonyoh, of Hackney-based pop-up Zoe’s Ghana Kitchen, started making and selling Ghanaian food eight years ago as a way to fund her Creative Writing MA at Goldsmiths. Her tutor suggested that focusing on her business might be a better way into writing the memoir that Zoe dreamed of.

Since then, she has won the 2018 Culinary Iconoclast Award, and, upon receiving it, tweeted: “Being ‘the first’ isn’t always easy, it can be hard hacking at the coal face of the food industry to break a new cuisine.” She also published that memoir too, Zoe’s Ghana Kitchen cookery book, so it’s surprising when Zoe says she has never worked in a restaurant in her life.

That is because the plan was always writing, and it’s tempting to see her interpretations of Ghanaian food for Londoners as an extension of her love of writing. “You have to weave a narrative around your food, you have to be clear about what it is you’re representing,” Zoe says.

It’s a story that begins with with her Irish mother meeting her Ghanaian father in 1970s London.

“I can’t even imagine what it was like for my parents when they got here. African and Irish immigrants were pushed towards living in certain parts of London, and one of those places is Kilburn, where they met.”

Zoe was born in the late 1970s at an unmarried mothers’ home based in Essex. Growing up as an only child, she didn’t see her mixed race heritage reflected in siblings, people around her, or in popular culture.

“The first time I remember feeling like I saw someone who looked like me or represented me on TV was when Zadie Smith’s novel White Teeth was adapted for television (2002). I remember being six or seven and saying to my mum, ‘why aren’t I grey? If dad’s black and you’re white?’ I didn’t understand why my skin was brown because I didn’t have any frames of reference. Since starting the Kitchen in 2010 so many customers my age have popped up with a similar ethnic mix to me.”

Second generation children are either spoiled with stories of the lives their parents led in a country long since left behind, or they have to seek out those tales for themselves.

“I didn’t have any Ghanaian family in London growing up. When my dad was around and cooking, the food became a point of interest for me. From about the age of eight I was always helping out in the kitchen. I was always trying to cook that food. It didn’t look like any of the other food that we were eating and cooking; it didn’t take me long to realise that this, for him, was like cabbage and potatoes for my mum.”

“My mum loves Ghanaian food, and she used to cook it when my dad wasn’t around. Food is his connection to home and I realised that food was my connection to that side of my identity. It was also about spending time with my dad.”

Zoe became an expert at whipping up groundnut soup and plantain, which her friends would beg her to make again and again. By 2010, Zoe had come up with the idea for Ghana Kitchen as a way to fund her creative non-fiction MA, where Zoe found herself writing a memoir about her dad.

“So I went back to Ghana to reconnect with family, to find out who my dad was through his family’s eyes. It also allowed me to build the recipe collection for Ghana Kitchen; asking about food and ingredients, thinking about how far I can take my interpretation. I was very concerned with being seen to appropriate the food and culture, even though I’m mixed Ghanaian and Irish.”

Zoe returned to England with a draft for her MA, and a better idea of how she could make Ghanaian food work for the London market.

“I understood that if three different woman in one house can cook jollof in three different ways, then I can cook it how I want to cook it, as long as it’s true to the essence of what the dish is. It’s one-pot spiced rice, right? Once the fundamentals are there, you can play with it – not that I’ve played too much. These are traditional recipes, but everyone cooks them in their own way. That gave me a bit of licence. That was where me and food took off, creatively. So the journey was incorporated into the cookbook.”

Zoe refers to Ghana Kitchen’s customers as an “audience” and has a desire to understand them.

“Black or white, African or not, the audience I was trying to attract was people who ate out regularly. That’s who naturally ended up coming along.” An audience for food suggests a conversation at the very least; perhaps even an appreciation of the stories behind the dishes. Zoe adds, “That’s the foundation of Ghana Kitchen. I used to purposefully put the seats really close together to get strangers talking.”

“One of the nicest messages I’ve had, I received after making a Radio 4 programme. It was from an Irish woman who described going to church, where some Nigerian immigrants had turned up. They’d made party food for after the ceremony. She said her favourite thing that she had seen in a long time was watching a load of Irish pensioners integrating with Nigerian immigrants and complimenting them on the food.”

“You can get people who are so different having a conversation about jollof! That kind of moment is priceless, isn’t it?”

Zoe Adjonyoh will be interviewing Levi Roots on 5th July at WeWork Tower Bridge. For further details and to RSVP please visit www.wework.com/promos/we-the-creators. This event is to drive applications for The Creator Awards, returning to London in the autumn. If you’re an entrepreneur, not-for-profit, performer or individual looking to secure funding for your idea then visit creatorawards.wework.com