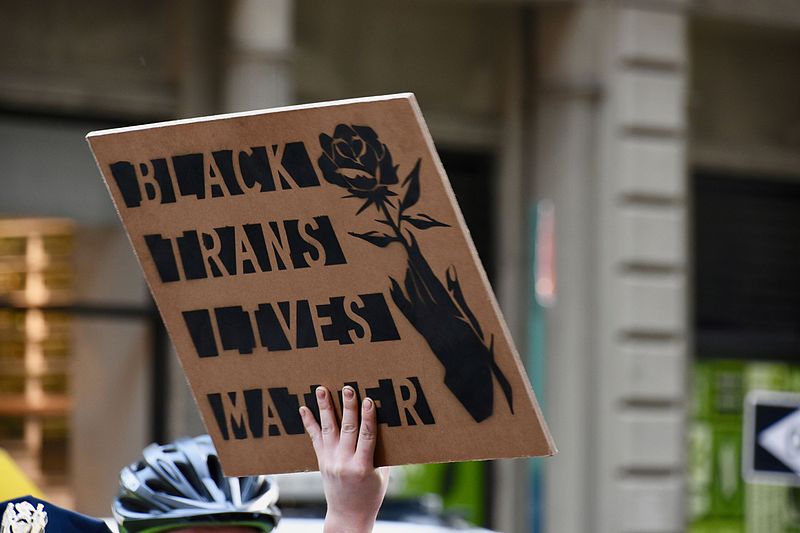 Amid protests and a racist pandemic, politicians are trying to quietly backslide on trans rights by scrapping proposed amendments to the Gender Recognition Act.

In a week which has seen the murder of two black trans women – Riah Milton in Ohio and Dominique “Rem’Mie” Fells in Pennsylvania – while tens of thousands marched in the US stating loudly and plainly that Black Trans Lives Matter, the UK government is poised to roll back rights for trans people. According to The Sunday Times, Boris Johnson’s team is angling to scrap proposed amendments to the 2004 Gender Recognition Act (GRA) which seek to remove bureaucratic, dehumanising and expensive barriers which trans people are currently forced to navigate in order to have their gender legally recognised. This possible change in direction lays bare the significant influence of the UK’s anti-trans lobby.

As well as trying to tear down plans to update the GRA, this lobby also seeks to crack open the UK’s 2010 Equality Act, which will strip away vital protections for all marginalised groups, as well as (ironically) cisgender women. This rollback on trans rights in particular (and many more rights in general) is on the horizon, despite the fact that 70% of people who made submissions to the government’s consultation on the GRA amendments were overwhelmingly in favour of positive change. As Gendered Intelligence, a charity dedicated to improving life experiences of trans people, points out: to ignore this majority voice would signal that “engaging [with the government] through democratic means does not lead to positive changes for the most marginalised”. It’s a tale as old as time that “democracy” in the UK means that only the most powerful voices get heard.

The government’s bait and switch on the GRA is particularly shady as in the UK, the “gender-critical” anti-trans lobby is populated by cisgender, predominantly white women, many of whom hold powerful positions within the UK’s gender-based violence sector (known as the “women’s sector”) and who have the ear of parliamentarians with the accompanying political influence that comes with such connections. There is a particular, deep-rooted racist violence in the UK iteration of transphobia. The invention and export of the concept of a rigid and oppressive gender binary was used as a device of subjugation throughout the British empire during colonialism. This included the attempted eradication of ancient and deeply spiritual understandings and lived realities of gender fluidity, including among two-spirit people in indigenous North American cultures; fa’afafine people in Samoa; nat kadaws in Burma, and hijras in India, who were criminalised during British colonial rule by Section 377 – a law used after a rebellion to “reassert colonial authority”.

“In the UK, the ‘gender-critical’ anti-trans lobby is populated by cisgender, predominantly white women, many of whom hold powerful positions within the UK’s gender-based violence sector”

Rachel*, a worker at Rape Crisis spoke to me about the disconnect in the women’s sector between powerful pockets of transphobia, and its self-professed “feminist” approach. “It makes me suspect of people’s approach to intersectionality in general when they are trans exclusive,” she tells me. “If you see someone else presenting their struggle which is different to yours – linked inextricably, but different – and your immediate response is ‘this is a threat’ rather than seeing an opportunity to expand and diversify the movement and make it bigger and more full of solidarity, it’s almost like saying ‘don’t come here with your struggle’. I don’t get it.”

Evidence of this influential transphobic lobby is hiding in plain sight. For example, this week nia – a UK domestic violence charity which works with a “proudly feminist perspective” – published a statement in support of scrapping the GRA amendments, stating that trans women (who they appallingly refer to as “males who identified as transgender”) are barred access to their domestic violence refuges. The statement is signed by nia’s Chief Executive Karen Ingala-Smith, whose transphobic views and involvement in the anti-trans lobby (she has spoken at multiple meetings of trans-exclusionary hate group Woman’s Place UK) last year resulted in her being barred from the Labour Party on the basis of “hostility based on gender identity”.

White cisgender women have a long, proud history of appointing themselves the arbiters of womahood. The “cult of true womanhood” is a phrase used by historians to describe a value system which emerged in the 19th century, whereby a “true” woman was supposed to embody values of piety, purity, domesticity, and submissiveness – concepts largely inaccessible to vast swathes of women who were marginalised due to their class, immigration status, disability, race (particularly in the era of legal enslavement and systematic rape of black African women) and being sex workers. Fast-forward to 2020 and women who are privileged along axes such as gender identity, race and class (with its associated access to resources and political influence) continue to target trans people; a small minority who are hyper-vulnerable to the exact gender-based violence that the UK women’s sector claims to be dedicated to eliminating. A 2018 Stonewall and YouGov report revealed that alongside 7.5% of cisgender women who experience domestic abuse, 16% of trans women have experienced domestic violence in the past year.

With anti-trans lobbying around the GRA amendments, we are faced with what Linda Stupart writing for The White Pube refers to as “contemporary forms of fascism”. This burgeoning wave of biological essentialism – essentialism meaning the idea that fixed categories exist and that we are intrinsically different from other people because of race, gender, class or disability for instance – is particularly alarming. Research has shown that “essentialism” increases prejudice by suggesting that the hierarchies that already exist in society are “naturally occurring”. Biological essentialism is, quite evidently, a pseudo-science that has never served people of colour well, and, in the case of the anti-trans lobby, is threatening to drag a much-needed legislative update off course (although it should be noted that the GRA amendments don’t even go far enough: they miss out non-binary people altogether).

Of course, the struggle doesn’t stop at steering the government back on course with the GRA amendments: this is just one more step in the journey towards justice. The women’s sector, within which the anti-trans lobby has its feet firmly under the table, as well as piping down and facing front when trans organisers are trying to change laws that can materially improve lives, needs to consistently and effectively support trans survivors.

Rachel tells me that while there are already gender non-conforming people and trans people using and working in gender-based violence services in the UK, many workers and survivors aren’t safe to disclose their gender identity. “I know people that are too afraid to ask people to use their preferred pronouns at work”, she explains. At the same time, trans survivors very often have nowhere to turn, and small specialist LGBTQIA+ services with tiny resources are expected to support survivors who are otherwise met with closed doors when they approach mainstream services. “There’s no use in the UK gender-based violence sector saying they are trans-inclusive when people in organisations are still holding harmful transphobic views,” Rachel tells me. It feels difficult to see a way out: “Do we tear the women’s sector down and start again? Do we need more specialist services? Or is there a way that our services can change and adapt to being truly trans and gender non-conforming inclusive?” she muses.

“If cisgender anti-racists aren’t working to ensure that black trans people can survive and thrive, any commitment that Black lives have always mattered is rendered meaningless”

Funding (which has been hacked away from support services over a decade of austerity) needs to urgently channeled into the further development of gender-based violence support services that are led “by and for”, as well as centred on and inclusive of trans and non-binary people. The location of anti-trans lobbying within the women’s sector should invite further scrutiny in how these services are supporting (or not) the most marginalised of survivors, including sex workers who have also been patronised and shut out by the very same services. Existing services that support trans survivors merely as an afterthought, because they are reluctantly contracted to support all survivors, must be held to account and recognised as breaching both national and international laws (such as the Istanbul Convention, of which the UK is a signatory).

Elsewhere, Black feminist movement leaders and thinkers look to trans organisers who have lead the way and revolutionised our collective struggle for a better future. At an online talk this month, academic and prison abolitionist Angela Davis explained that “we need to point to cases such as the murder of Tony McDade, but we have to go beyond that and recgonise that … this community has taught us how to challenge that which is totally accepted as normal … if it is possible to challenge the gender binary, then we can certainly effectively resist prisons, and jails and police”.

In pursuit of a different world, the expertise and strategies of all survivors of gender-based violence will lead the way – this includes campaigning tirelessly to improve trans people’s material conditions in the here and now. If cisgender anti-racists aren’t working to ensure that black trans people can survive and thrive, any commitment that Black lives have always mattered is rendered meaningless. If we’re truly dedicated to building communities based on care, harm-reduction and solidarity, we will continue to resist transphobic voices and lobbies that shout loudly in order to silence others.

The GRA amendments are urgently needed; gal-dem encourages you to sign Gendered Intelligence’s petition today to tell the government that a U-turn on this overdue update would mark a shameful and regressive legislative backslide.