Inhabiting west Africa and Babylon in tandem: brother portrait proves he is one to watch 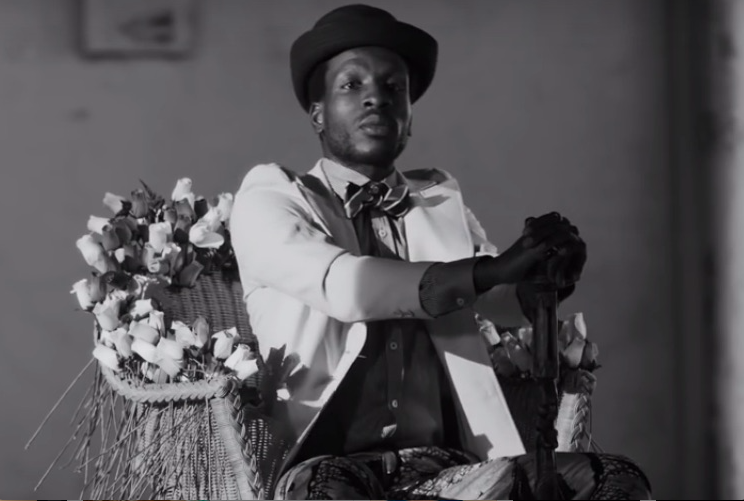 navigate: in limbo is the name of the upcoming, entirely aptly titled, debut mixtape of south London rapper and poet, brother portrait, who is also one third of hip-hop trio Black/Other. In the run-up to its release, a jaw-dropping first video Seeview/Rearview, directed by Nadira Amrani, took viewers through the eclectic sounds, senses and spaces that comprise the multidimensional artistry of brother portrait. The video unearths, with flawless potency, the journey through limbo he is navigating, as it pulls the viewer in to rock with him on the bumpy road.

Speaking to brother portrait days after the Seeview/Rearview’s debut on okayafrica, the excitement is palpable. The reality of how high the bar has been set begins to sink in as he reflects nervously “damn, ok, I’ve really got to deliver now.” Ready or not, his journey has begun and as he contemplates the fresh depictions of the “fullness of myself,” he is clearly keen to embrace his music as a way to explore the multiple layers, experiences and understandings of his cultural identity, community, family and diaspora that personify him in his entirety.

Seeview/Review speaks largely to the multiple lenses through which he sees himself as a Sierra Leonean Londoner constantly swinging between identities.  In the video itself, the clipped regality of British mealtime becomes jarred by the food of afar that doesn’t quite fit on a fork or in a fruit bowl, as cultures fail to mesh smoothly. Similarly the seamless sleepiness of the first half of the video behaves in direct contrast with the black and white raw aggression posited in the second. Responding to comments on this contrast he offers: “it’s not often that can people see all those different sides of what I do. There are people who know me as a person in jam sessions who can do improv over jazzy beats, people who know me just through poetry, people who know me as someone who can spit. Through my art I want to show those different sides of me more.”

Reflecting on what else listeners can expect from the mixtape he begins “I just want to keep going deep within myself, understanding parts of myself, my community, my history, my family. I’m not going to answer questions, or resolve anything, this is the first stage: identifying what those boxes are [that make me, me]: community, diaspora, family. It’s a process of opening them to start going inside and see what’s in there. Over the years I’ll be taking stuff out, rummaging through, laying them out, maybe reorganising the content.” A determined philosopher with commitment to social justice, he is more than capable of dropping concepts and facts that could blow a listeners mind effortlessly. Yet humility reigns supreme through the person and the artist as he describes himself “continuously on a process of growth. I’m always journeying and I don’t feel like I’ll ever reach a destination. I might be content at a particular part of the journey but I’m under no pretense that that’s the end of the journey.”

The gracious patience with which he approaches his exploration into the self and its surroundings is perhaps what makes the work of brother portrait so relatable, despite a lyricism that may appear at times unfathomable. “I don’t want to give somebody a load of facts or tell somebody a way to be, I’d rather [present] a notion, so there’s a freedom to feel your own thing within it. I want people to hear and feel it for themselves. Some of my favourite songs are like Gil Scott-Heron, Everyday or Reparations on my Soul, which are really sparse song but are full of such feelings of indignation. [Similarly], Umi says, by Mos Def is one of the most harrowing tracks that he’s ever put out, and it’s got the least words, but it’s a real implication of a feeling. That moves me a lot and the stuff I want to create is about mood and atmosphere. That might be something that someone puts on in the morning to make them feel a certain way, something that can get them through a day.”

During a recent brother portrait performance which had a packed audience simply enchanted as they watched the birth of an artist in flight, the feeling that something had been unleashed was undeniable. A coming out of sorts, Seeview/Review offers a robust entrance into new spheres of musical conversation that can expect to see brother portrait’s uncompromising lyricism and acute ability to paint a mood with words continue to stun.