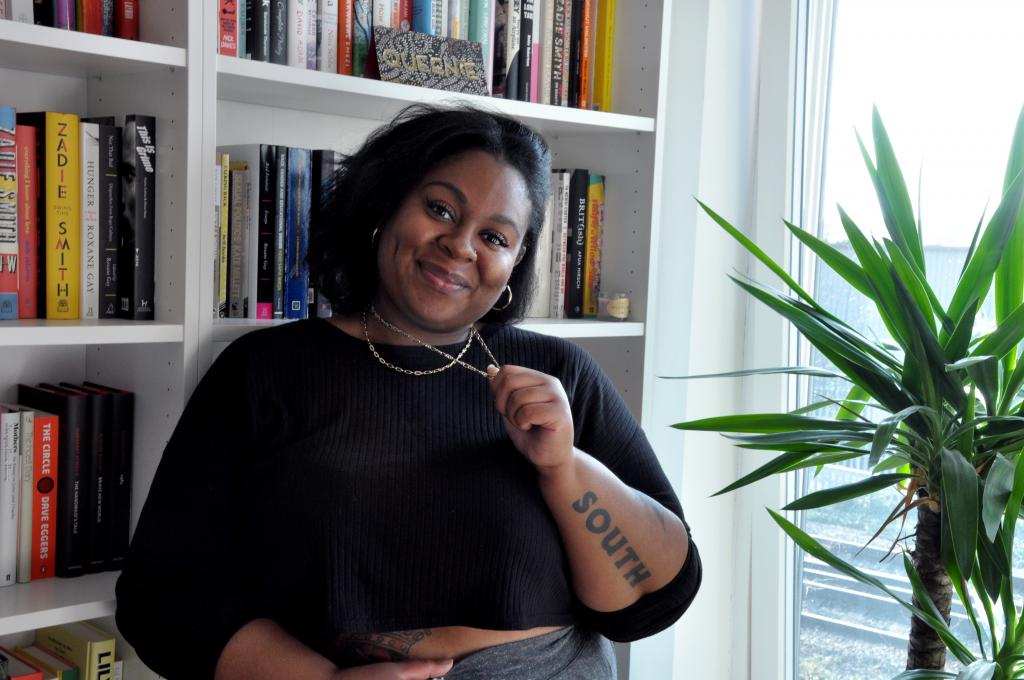 I admit that after sitting down and reading the novel Queenie cover to cover in almost one sitting, I wanted to know how much of the protagonist’s messiness was a reflection of the author’s own.

Many people have assumed there is a connection. Because there are so few black women who are visible within literature, there seems to be an expectation that we can only conceptualise a world inside of our direct, lived experiences. Queenie’s author Candice Carty-Williams told me about an instance where a white woman approached her crying in sympathy with her eponymous heroine’s experiences in the book. She immediately corrected her and the woman stopped crying. But to simply say that Queenie’s story isn’t a part of Candice’s would be incorrect. It’s complex.

Despite Candice being a self-confessed shy person with a fear of public speaking, as we sit down to begin our interview on her lunch break at Penguin Vintage where she works in marketing, her presence is warm. She made me feel at ease, no matter the complexity of our discussion and I could tell that she was a fellow proud south Londoner because most of her sentences were peppered with a characteristic overuse of the word “bruv”. Us southerners are the definition of extra, so it’s no surprise that Brixton serves as the backdrop for the trials and tribulations faced by Queenie; from failed love affairs to gentrification.

On this, the eve of Queenie’s release (a debut title bought by Trapeze for six-figures in a two-book deal in 2017) the 29-year-old seems happy and only slightly stressed. Her brightly coloured headscarf is perfectly wrapped; it became a signature out of necessity after years of having her head pulled as a child who was an anomaly in that she had tightly coiled hair, rather than looser hair like the rest of her cousins. “I remember the beatings with my hair,” she tells me. “It was just so — the trauma. Even now with my hair, I’m just like: ‘Headscarf on. Leave it.’”

The character Queenie, in contrast, has an explicitly positive relationship with her natural hair. But like most black women’s lives in their early twenties, the other obstacles thrown in her way feel relentless. Amongst moments of hilarity, her story will make you sob. She’s navigating her job, a break up with her white boyfriend Tom, intergenerational differences between family, and a mum who is battling her own demons.

The never-ending drama surrounding Queenie is strategically interwoven with “the corgis”, a group chat comprised of Queenie’s best friends Cassandra, Kyazike and Darcy. The dynamic between the women when they get together serves as light relief to the trials and tribulations faced by Queenie and show the importance of having close friends, each of whom can offer different forms of support. Snippets from “the corgis” were dotted throughout the text and had me cracking up.

Parallels can accurately be drawn between the mental and physical torment which Queenie faces throughout the book and Candice’s experiences at a similar age. Age 22, Candice lost her best friend and spent two years bed-bound due to the crippling physical manifestations of stress. “Our lives are textured with and shit and a lot of pain,” she tells me. “I really wanted to show people who aren’t from the same background that sometimes [this is] the day-to-day reality and black women are in pain. Like when people are just chatting, chatting, chatting over Queenie’s head – even when she’s having a miscarriage.”

Candice is generous in sharing her personal experiences and makes it clear that they fuelled her determination to spotlight black women’s mental health in Queenie. “I was also really good at pretending that I was fine,” she reminisces. “[But] I remember saying to my brother and sister [that I was] just going to write off my 22nd year because I didn’t do anything. It happens to a lot of us. So many of my friends are anxious all the time and are depressed and only now, at 30, are we finding the language for all that. ”

Literature, therapy and a commitment to honour the memory of her best friend, eventually brought Candice back into action. “The first book I could read was a book called I Capture The Castle because it’s just so far removed from everything. Like, it’s a remote castle in the middle of nowhere and nothing to do with like London. That was the point when I was like, ‘books are excellent and I do definitely love them still’. I remember being sad though, that I didn’t have something that I could read, like a resource for myself. That’s when things started sparking.”

“I had to write this for my young self, or someone who had a lot of shit coming. I had to write something to let her know you are going to get through it”

The portrayal of mental health within the book is both powerful and healing. Like many other black women, there have been days when anxiety has left me feeling as though I might die at the hands of a panic attack or external and internalised pressures to be brilliant have become so overwhelming that I don’t want to leave the house. After mentioning the book at an event, another black woman was quick to tell me that she couldn’t stop crying as she read it – for the first time she had read something which embodied her experience.

As Queenie’s mental health becomes increasingly strained and things continue to fall to pieces, she eventually ends up seeing a therapist. Typically, her Jamaican grandmother is quick to tell her that she does not need therapy. This is not uncommon; when I told my dad I was going to therapy he responded by telling me “you’re fine”. As black people, we’re sometimes socialised into thinking that stress and anxiety are white people’s problems. We know that in so many instances the pain of black people, and black women particular, goes ignored – even when you’re Serena Williams.

“Statistics that black people struggle so much and never get the right treatment. I don’t take any anti-depressants I don’t take any medicine at all but talking therapy is the most amazing thing and I just want people [to understand], I didn’t understand any of this stuff when I was going through it. No one was telling me what was going on,” says Candice. “Part of the reason for me including it is to be like; it happens, this happens. Like even just to understand the science of panic attacks helped because I was like: ‘oh, it’s adrenaline.’”

Apart from mental health, a lot of Queenie’s plot draws on the experiences of black women around her: the family dynamics, workplace politics and mental health. Even the character’s name, Queenie, a moniker which I hadn’t heard outside of the context of my Guyanese great-grandmother, was inspired by how the story applies to all black women.

“I couldn’t think of anything,” says Candice. “I [was] sat with my mum in my nan’s house and I said ‘if you could give a girl a name that was good, but she’d probably find it annoying because it’s extra what would it be?’ My mum likes alternative names, she was going to call me Indira when I was born, after Indira Gandhi. She was just like, ‘Queenie’.” As the book is about black women finding our place, the regal name was a good fit. “We need to empower ourselves,” she adds.

Candice started her career as a writer interning for the Guardian (where she jokingly bribed a music journalist to hire her permanently or else she would leak unreleased music from their desk) with fellow superstar writer Reni Eddo-Lodge. She has since made it her mission to support fellow black women through the industry.

“As the book is about black women finding our place, the regal name was a good fit”

You could aptly describe her as a plug. At the tender age of 23, she set the wheels in motion for the Guardian and 4th Estate Short Story prize which was set up to increase the profile and visibility of emerging writers of colour. When I first met Candice around a year ago, she was determined to help gal-dem access some serious cash-money. “I thoroughly believe in holding the door open for anyone who’s coming behind me,” she explains. Because people have helped me and I’m aware that I wouldn’t be where I was if [they] hadn’t.”

Despite the book deal Queenie landed and a glowing review from Oprah’s magazine, initially, there were rejections from editors who were unsure of how they’d market the story or exactly where it would sit. This response only further fuelled her desire to support other black women coming through the industry. Queenie finds herself working for a major newspaper and consistently having to explain the importance of topics which we know to be both important and true, a nod to the everyday challenges that come with being one of the few, and sometimes the only black woman in media spaces.

Growing up, Candice became accustomed to this sort of rejection. Teachers doubted her abilities at every turn and labelled her as a problem despite being the only kid in class to have such a varied reading list. She was reprimanded for spotlighting black people through history when she didn’t see them reflected on the curriculum and she was told not to apply for university to do drama and English because she wouldn’t get the grades. She did, and Queenie and the rest of Candice’s accomplishments are a clear fuck you to anyone who ever doubted her. “I had to write this for myself. For my young self or someone who had a lot of shit coming I had to write something to let her know you are going to get through it whatever it is.”

Despite comparisons to Bridget Jones, as one reviewer on Good Reads succinctly puts it, “the only thing Queenie and Bridget have in common is that they live in London and are bad at love”.

So what can we expect from Candice’s next book? Grief, friendship, sex, love and mess. “It’s about a group of friends and the strong friend, she can’t be strong anymore and it is about why and it is about what that means for the people who are left behind. It’s about friendship; it’s about relationships; it’s about the mess. It’s about sex; it’s about identity. It’s about your place in a group, you know, cause in Queenie, that is person. So she’s basically made herself centre, she’s put all her friends in a group chat. She’s like: ‘hi guys, I need your help’. But like this is about like three different people and the fourth who we still touch on.”

Queenie is a book which Candice wrote for herself, but in doing so, she’s written for a whole generation of black British women and girls who rarely see themselves in ies. Now we have an example of us in literature where we are multifaceted. The lives of black women can be messy. We don’t always have our shit together, despite what it might look like from the outside. Candice is successful in highlighting the fact that life can be peak and it’s impossible for us to cope with the entire time, and that’s OK.