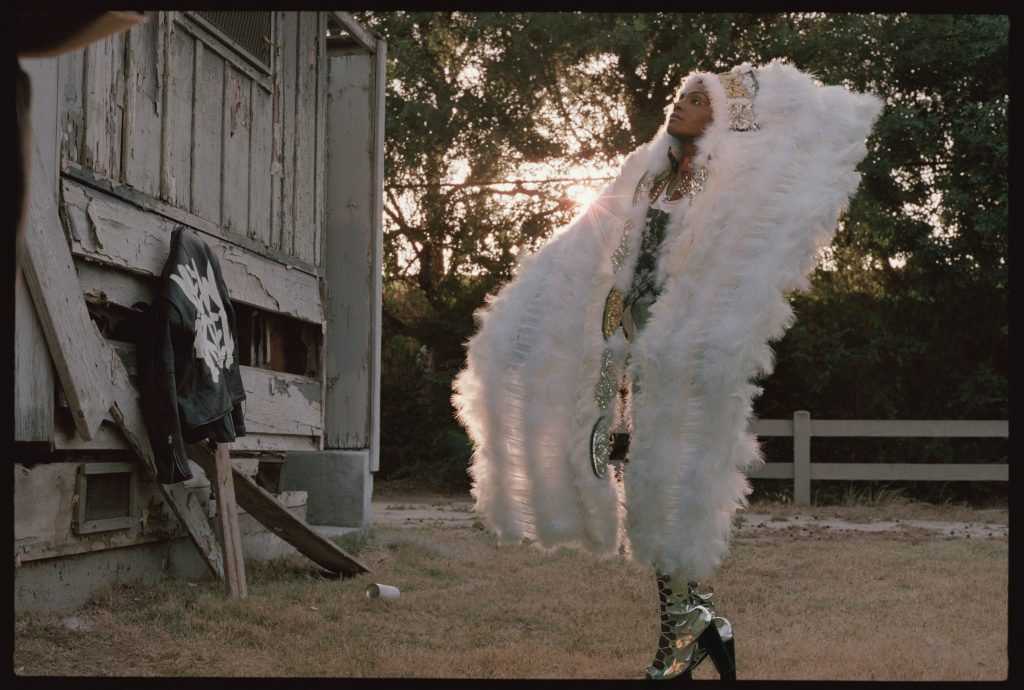 Dawn Richard is an independent musician, dancer, actress, record producer, and animator who collaborates with Adult Swim – but, more than all that, she’s an innovator. Her latest release, new breed, is written as an ode to her hometown of New Orleans. She spoke with me about the album, but also about her experiences as a black woman working in her various industries, and why her output will always incorporate futurism.

gal-dem: What was the driving force behind the new album, and why did you decide to release it now?

Dawn Richard: I never had the opportunity to tell the story of the Mardi Gras Indians in my art – to wear the headdresses that were hand-sewn by the Indians, or to play my father’s music from his band or incorporate that into my own music. I never got to just showcase a city that I’ve always been in love with, and this was an opportunity – so after three years of being quiet I decided that, if I was going to tell this story, then I was going to do it correctly. I was going to reconnect with everyone that has ever been in my life and ask them if it would be okay to showcase the city in a futuristic, beautiful and innovative light.

There is an urgency to your work, especially on this album – is there anything that you feel is going on in the world right now that nobody seems to be talking about, but needs to?

We could go to Puerto Rico and the situation that happened there with the hurricane, you could look at Flint, Michigan and the fact that they still don’t have clean water… New Orleans has always had to deal with that struggle… in our eyes, we are wealthy because we are full of culture and we never want to lose that – it is our gold, our power, and it has been that way since I can walk and it has been taught to me since I was a kid, and it’s important for the preservation of culture within our city. Whether it is voodoo, Spanish, French, whether you are gay, trans, straight, you can walk through the streets and be whatever you want. That is what this album embodies, and that’s what it means to be a “new breed” – to walk unapologetically into your life, proudly.

“That’s what it means to be a ‘new breed’ – to walk unapologetically into your life, proudly.”

As a mixed-race, genderfluid woman, this album really resonated with me. How do you think we can use art to move toward a more fluid future?

For me, every time I’ve done an album I’ve tried to incorporate a future. To push people to something: an idea that isn’t there yet…With new breed it’s no different – I promised I would do an album that had that history, but I would do it my way: I would take New Orleans and I would show people that we are not just jazz, we are not just funk – we can have all those things, but we are also able to sit in the electronic space and a futuristic space and push New Orleans into any other idea – and it will work. That’s what I have been trying to show people – and all of it can be done by a woman of colour, and it doesn’t have to be linear – “oh, she’s R&B, oh, she’s hip hop” – no, I can be all of those things and exist within pop culture as a black woman and it not be far-fetched.

Your visuals are obviously very important to you as well – I was wondering how inspiration for your music videos and your animation differs?

With our music videos we play with storylines that put a woman in a strong light, because we don’t always see black women in these strong roles… I have an affinity for armour – I love when I see a woman, her body and her lines against something cold and metallic. There is something beautiful about brown skin against that. With the animation side of things, I still play with shapes and colours, but in a different way. When I collaborate with Adult Swim, there are not a lot of people of colour, especially women of colour, on Adult Swim. So instead of looking at that as a negative, I choose to take that as a positive – so everyone from the team that I work with is African American or a person of colour… When we create things on our own we create people of colour. Just like my music – the point is to push the idea and the possibility of changing your eye.

A powerful image that has stuck with me is the shot from ‘sauce’ where you’re riding the black mechanical bull – can you tell me more about that?

As I’ve grown into who I am, the love of myself has grown – but I had to work really hard to get there, and ‘sauce’ is about the celebration of black love. I found a partner who I am proud to share my life with and, in that, I wanted to show a beauty in the dominance of woman, with this beautiful black woman riding a bull – but it also shows the beauty of black on black and the strength of a man. He’s strong and he’s powerful, yet I am able to dominate the situation (not in a vulgar way). The movement is about lines – as a dancer I just have the affinity for lines. No matter how strong the bull looks, the way I am dominating it isn’t hard and aggressive, it is soft and fluid… There’s this appreciation of dominance and vulnerability and how it can be beautiful, and then I’m adding elements of the future within it. So you have a black man wearing an LED helmet, which signifies the idea that, even in the future, black love is still beautiful – it never changes.

If there was a young person of colour who hadn’t heard any of your music before, what would be one song from this album that you’d really want them to listen to?

I’m not just going to say a person of colour… I would tell any person: black, white, green, gay, straight or trans, ‘we, diamonds’ is for all of us. For any creative, beyond black or white, all creatives have experienced adversity and rejection, or been through so many different trials and tribulations to try and bring something new to the table. I made a record that explores “the other”.

Which song from your album resonates with you the most?

I’d have to say ‘vultures | wolves’. That part of the album was hard to write. It is very hard to acknowledge your own personal demons… I wanted to always be honest, and ‘vultures’ speaks to self-sabotage and being aware of your own indiscretions…and then on ‘wolves’, it’s how people see weakness in you and they choose to prey on you. I talk about self-love, and there is that dynamic of coming into a business where the wolves’ sole objective is to prey on people who have an art that they can sell, and if you are not fully aware of who you are, then you’re not aware of your own demons – your own indiscretions, whether that is insecurities, whatever that may be – and you will get preyed upon. They’ll see it within you and on you… I promised myself that if I were to do this album, then I would speak about being a “new breed” – and being this new entity, I had to also speak about the insecurities.

As an independent artist, do you have anything you’d like to say to new musicians starting out?

Believe in your craft, man… You’re going to have to get very creative about how you make your money, how to get your art out there, but it is possible – and the more you push yourself to be all of those things, the better it is for you to be able to survive longer and be able to create art longer for yourself, and for the people around you… I always tell people I hate giving them advice because my journey is probably going to be totally different from the next person, and the worst thing that indie artists can do is compare their journey to someone else… I read my bio on iTunes yesterday and it said: “Dawn is probably the only R&B artist that has a collaboration with Adult Swim”… I never thought that that would be an odd thing, it’s always been a dream of mine and so I really fought for that. And what I realise is, I shouldn’t be the only one: the possibilities are endless. I’m proud that I’m a part of Adult Swim, but I shouldn’t be the only one – shame on us for telling artists that the only way you can be successful is in one format.

‘new breed’ is out now on Local Action Records. Tickets for Dawn Richard’s Europe tour in April are on sale now.