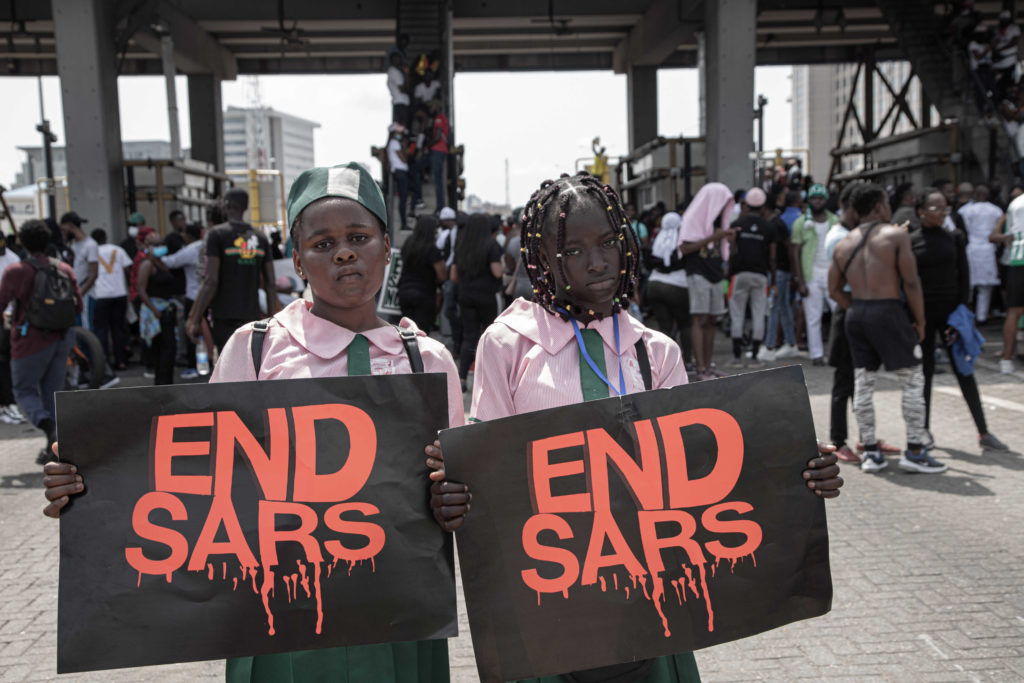 The infamous Special Anti-Robbery Squad in Nigeria has been disbanded, but will that lead to long-lasting positive change?

In Nigeria, the likelihood of coming face-to-face with death at a police checkpoint is not uncommon. Years of unfettered violence from the Nigerian Police Force – particularly from members of the Special Anti-Robbery Squad (SARS), the now defunct unit, have traumatised the Nigerian people. But things finally reached a tipping point when pent-up anger and rage erupted from the country’s dominant youth population.

The current incandescent movement, which has already yielded an estimated 100 million views through social media, was spurred by the killing of a young man in the country’s southern region of Delta State last week. Since then, waves of support from the local and international community have flooded in, taking on shape through the use of various hashtags such as #EndSARS and #SARSMustEnd aimed at amplifying the evident cruelty of SARS members and the Nigerian government.

“Protesters demand public trials for all defaulting officers, compensation for the families of the deceased and a top-down structural reform of the police force”

Reports of unlawful killings and debilitating torture by SARS officials have been around since 2016. The ongoing protests have sustained momentum because of the collective antipathy Nigeria’s youths feel towards the wider police body, which is notorious for harassing the very citizens it is sworn to protect.

Typically, these officers lurk in plain clothes, at numerous locations across the country, armed with guns and drunk with power. Chidinma, a 22-year-old protester, has been stopped on numerous occasions and forced to disembark from her car so that a search could be conducted. When nothing incriminating is found, the officers typically ask for bribes. “I am marching today because we don’t want a team of men on the road harassing, raping and killing us. We don’t need them on the streets because they are the ones killing us, not the criminals or thieves,” she tells gal-dem. “We need the people recruited into the police force to go through proper training and also a psych evaluation.”

For many young Nigerians, the stories of injustice from the special unit are hauntingly similar. 25-year-old Tomi says SARS officers demanded a stop and search of his Uber, following a night out with friends at a popular Lagos club. “When the officers noticed I had dreadlocks, they thought I must be a yahoo boy (internet fraudster) and when they saw a meme of Idris Elba, I was accused of impersonating someone else” he recounts the absurd story. Because survivors of SARS brutality are wrongfully profiled due to their looks and clothing, pervasive searches of their mobile phones are a common scare tactic used by the police to intimidate them into paying exorbitant bribes.

Today, Tomi is among the pack of Nigerians flooding the streets of major cities like Lagos and Ibadan, marching with a unified goal to cease the unlawful use of force by this notorious unit. His story and that of many others like him, now documented on an official ENDSARS website through audio and text, represent the striking levels of ineptitude and corruption that have plagued the country for decades. Government officials are often in the news for siphoning gargantuan amounts of money or economically mismanaging budgets, thus depriving other sectors of the nation of any advancement as a result of their insatiable greed.

Well, not any longer, say the country’s millennials and Gen Zs who are currently rallying against a lack of accountability and transparency in their country’s governance. Their cries captured on social media have become too vivid and undebatable to ignore. They demand public trials for all defaulting officers, compensation for the families of the deceased and a top-down structural reform of the police force which would include a psychological evaluation for all armed officers. As straightforward as this may seem in a democracy, the Nigerian government has responded woefully to the needs of its citizens, seeing as over 10 protesters have now died since the protests began last week.

When the country’s incumbent president Muhammadu Buhari broke his silence and addressed the nation, his promise of affirmative action to reform the police system and disband the unit was undermined by major discrepancies in the police ranks. Excessive force was still being used on unarmed protesters across a number of Nigerian states including Abuja, the country’s federal capital where people were also tear-gassed. Simultaneously, dozens of young protesters who managed to escape the chaos were rounded up and hauled away to clandestine police quarters where they were beaten, bruised and denied access to their lawyers. Social media brought to light the blatant disregard of their basic human rights and roused Nigerian youths to rally on and off the streets to the annoyance of the current government administration.

“Announcements of police bans have frequently been communicated in the past, only to wind up being empty following years of ignored directives to scrap the units”

The ongoing protests show that no one is above criticism as the youths are holding everyone in a position of power accountable for their actions. Jola Ayeye, a screenwriter and podcaster who has been vocal about the movement says the fight extends beyond transparency from the police. “Yes the movement is about ending SARS and police reform, but the stories you hear from Nigerians have shown that the fight is beyond this. It has to include criminal justice reform and institutional reform”, she says. “It’s hard to believe that these killings and attacks on Nigerian citizens are novel information to the government and police commissioners, so this must mean that they are either complicit or not in charge of their men.”

Further evidence that the chain of command between the police and their leaders had broken down, came to light when police continued to act without regard for official orders. This may explain why the president’s late response was unable to mediate the already brewing tensions in the country. Announcements of police bans have frequently been communicated in the past, only to wind up being empty following years of ignored directives to scrap the units.

It has become the norm with social movements in Nigeria that the goalposts get shifted to create fake victories. But this time around, the fruitless promise to ban the unit will not suffice for young Nigerians who have collectively agreed that oppression has no place in their society.

Traditional forms of media have also exacerbated the tensions between the government, the police and the people. They choose to fuel harmful propaganda and ignore the inhumane treatment of citizens. However, with the rise of new-gen, digital media publications like the Native Magazine, the Republic, Zikoko, More Branches and more, documenting the lived experiences of young people has never been easier.

Something feels different this time. The miasma of pain and anger felt by the nation’s youth population has resulted in a decentralised movement with no official leaders. Its coordinators are closely knit by relationships among feminists, technology startups, lawyers and human rights activists. Now pockets of unofficial coordinators have formed all over the nation, from those who fiercely amplify the #EndSARS hashtag – and its many iterations – to those who set up protest venues both at home and in the diaspora. And even to those who gather resources like food, water, medical bills and legal services.

“Something feels different this time”

Social media has become a fierce tool to fight oppression. There are collectives like Feminist Coalition, a week-old group of young feminists that has urgently responded to the needs of the people on the frontline of the EndSARS protests. These women have swiftly risen to the occasion to protect and provide for the country’s youth, despite facing backlash and threats of physical violence from higher powers.

Their involvement in the ongoing unrest is revolutionary because Nigerian women are often susceptible to sex and gender-based violence from the police, but also from the men that they fight alongside. The protests have brought their plight to the forefront and helped mould our analysis of inclusive activism, despite the fraught misogynistic climate. This stresses the urgent need for representation of women not only in social activism, but also in elected government positions.

Though the existence of the Same-Sex Marriage Prohibition Act (SSMPA) continuously threatens their livelihood and existence, LGBTQIA+ activists like Matthew Blaise are demanding that queer voices are no longer silenced. A survivor of SARS brutality himself, Matthew is emboldened to speak on the danger faced by the queer community who are often accosted by homophobic police. “The dehumanising profiling and illegal detaining of queer people is one way the SARS force works. They randomly roam around the streets and pick up feminine-seeming boys, and even straight-passing men. They go through their phones and when they see queer content, we are beaten, extorted, assaulted, and even after this, we are still outed to our loved ones,” they say. “I don’t really care what people think of my video. There is a revolution happening. And in a revolution, we don’t care what our oppressors care or think.”

The arc of history is shifting in favour of the younger population but it may be too soon to call this a victory yet. Just days ago, the Nigerian government, through the office of the Inspector General of Police, officially announced that the defunct SARS unit would be recalled for immediate debriefing, psychological examination and further training before they can be re-deployed into other policing duties. Also announced was the birth of the Special Weapons and Tactics Team (SWAT) that will fill the gaps from the dissolution of SARS. But no matter which moniker is adopted, protesters on the ground have grown tired of the government’s response. They seem entirely concerned with saving face and ending the protests rather than enacting necessary steps to root out the oppression of its people.

What the Nigerian government consistently fails to realise is that the changes triggered by the protests have been crucial in re-aligning the perspectives of younger people. Now, conversations surrounding politics are met with urgency by the new generation who are bent on turning activism to tangible results. There is already talk of forming a youth-led political party that will accurately represent intersectional demands of a modern Nigerian society.