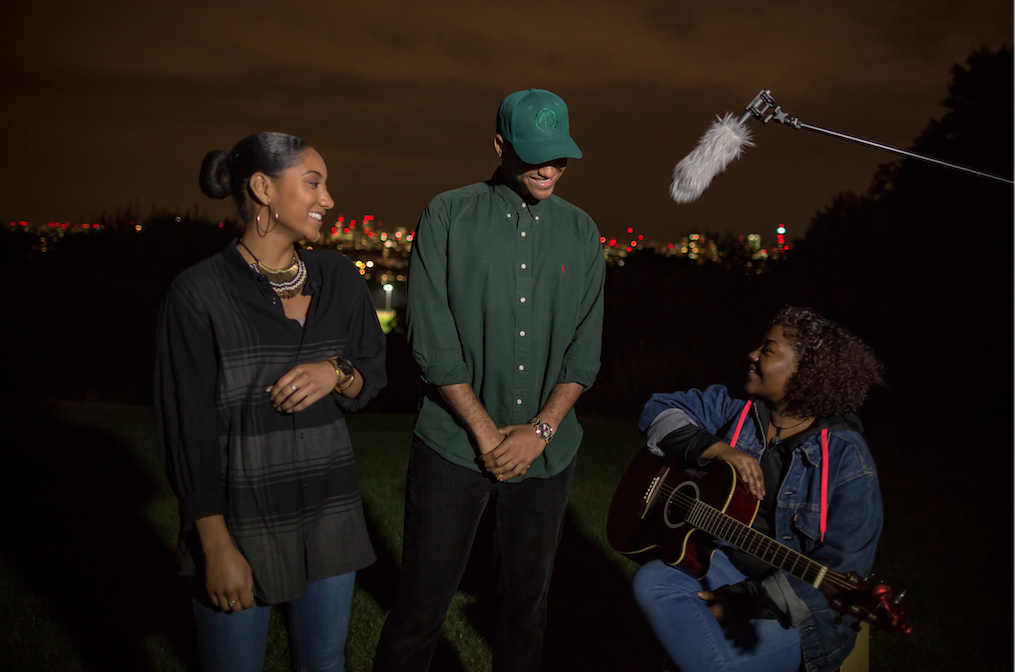 Not many twenty year old poets have delivered two TED talks,  performed on over 200 stages, and had their work featured in music videos – but then, most twenty year olds are not Sophia Thakur. Having first performed poetry in public aged just sixteen, over the last four years Sophia has been continuously making strides and breaking down what it means to be a female poet in an internet age. We are thrilled to be premiering her cover of Justin Bieber’s “Love Yourself”, where she sticks two fingers up to cancer.  The version of the song is a tribute to the warmth that Sophia’s grandmother, who passed away in 2008, brought to her family during her life. I sat down with Sophia to discuss how she writes about personal topics, deals with the expectations surrounding female poets and first and foremost, the importance of retaining autonomy in a world where one’s talents are often measured by how many followers they have on Instagram.

Sophia’s induction into poetry started in school, five years ago where she first performed in the voice of Martin Luther King for a competition. Having grown up in what she describes to be a “semi-posh, mostly conservative school that didn’t really touch on sensitive topics”, she went on to win the competition and the following year, aged just sixteen, performed on stage thanks to Mikel Ameen – and she’s not looked back since. On the roster of her first show were Nezya and Fuse ODG, who has gone on the change the face of Afrobeats in the UK. Prior to performing her first show, Sophia hadn’t been exposed to poetry outside of HBO’s “Def Poetry Jam” and so was unaware of the talent housed in the UK. Immersing herself in the creative community of poets in the UK is something which she’s come to cherish, providing her with the necessary tools for success. “The nature of poetry is collaborative so people do support [each other] so much! It’s beginning to become more mainstream now and I’m seeing a lot more competition. I just hope and pray that we don’t all get lost in the sauce of social media to be honest.”

I wanted to find out whether the nature of Sophia’s poetry had changed over the last four years, and whether she looked back as those of us often do and cringe at our first pieces of writing. Not all of us are born woke, but Sophia recalls her earliest pieces of writing as being “a spiritual experience”.  In an age where the validity of young people’s experiences are so often disregarded, she’s taken recent inspiration from words which she wrote three years ago. “I wrote a poem on preserving someone else’s love, and having to walk away to let them place their love somewhere it’ll be appreciated. It was called ‘save it’, and I was 17 years old when I wrote it. I ended up living the experience earlier this year and only really understanding the concepts within it 5 months ago.”

We discussed how social media has become somewhat of a headache, particularly as she describes herself as being a “public female”, dealing with “having to maintain appearances online, being up to date with everything and being prepared to be scrutinised if your opinion doesn’t align with what people think you should think.” After taking her poetry on a tour around universities, she focused too much on the responses from others.  Although the feedback led her to progress in some senses, she reflects that it “made writing a horrible experience, because [I] wasn’t writing for [me] anymore, [I] was writing to appease everyone around [me]. [I] was essentially writing for the audience as opposed to writing what felt honest to [me].” Sophia believes this to be inextricably tied to her position as a “female poet”, something which herself and other people take notice of before they recognise any other interests or characteristics.

As  women, or women of colour writers, there is often an assumption that the subject matter which we touch upon will always be inherently tied to our physical characteristics. But as Sophia has developed as an artist, she’s started to explore other areas, something which she believes is in part down to the prominence of male poets. Whilst she still sees herself first and foremost as a “female poet”, the complexities within this have changed. “I’d say as a female because I go through everything as a female and that shapes everything I do and say; probably more so than my ethnicity or religion. But I’ve learnt to engage the other aspects of my identity to allow me to write about lots of things. I’ve found that [with the] female poets I know now, a lot of the topics ar female centred, so they’ll talk about feminism, women’s liberation.. children – topics that are specific to happening to a woman. Whereas men don’t feel as obligated to talk about these things, because masculinity is the norm unfortunately.”

Sophia’s latest work, “Dear Cancer” centres on something different altogether.  It focuses on a rarely discussed issue – cancer, in memory of her late grandmother. Family has always been a source of inspiration for her work, and her older brother provides the vocals on this particular video. “It’s actually the first time we have put out something that we’ve both worked on. We are working on something together at the moment actually. It meant so much to have him on the track man, since he lived it with me.” Sophia’s brother wasn’t initially supposed to feature on the track, “I first filmed it with another singer, but the vibe just wasn’t right. There was a massive disconnect and then I rehearsed it with my brother and it just clicked. It made sense. We’re talking about my grandma, both our grandma.”

Initially performed under a more explicit title, Sophia decided to change the title on account of her grandma, “who would beat my clart if she heard me swear.” Being someone with such a public persona, sharing intimate details about her life has become “comfortable” and working with her brother to create a piece for her grandma and “a  hate piece for the thing that took her” was even more so. She informed me that the thing she loved most about her grandma was,  “her hospitality hands down. She was so accommodating to any visitors she would have. She was such a woman of faith but she really saw the human side of people. I think more than most people.”

With this piece, Sophia wants “people to be able to find comfort with their passed loved ones again; away from whatever took them away. I think comfort is what I want to be honest – with all my poems. Comfort in self, in your capabilities, in your slay, in your vision.”

Find tickets to Sophia’s up and coming performances here.