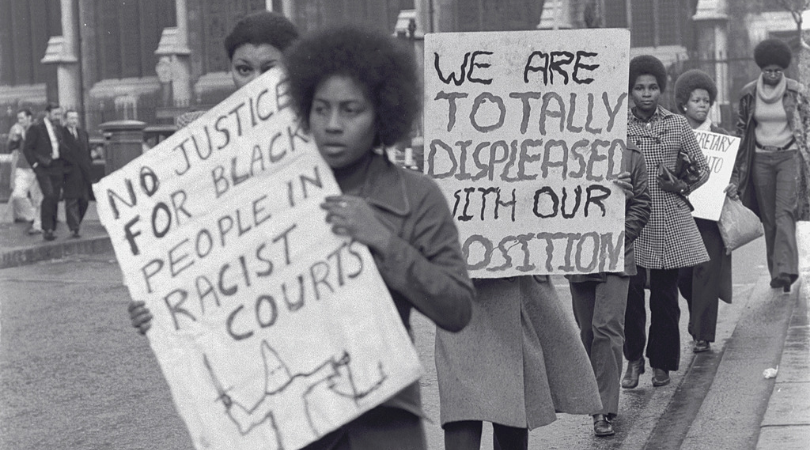 All photography by Neil Kenlock

The history of the British Black Panthers is still little known. Blooming out of a wave of community activism in Brixton during the 1970s and 80s, dozens of people, including Olive Morris, Altheia Jones Lecointe and Beverley Bryan, would meet to organise food clubs, education programmes, a library and a safe space on Shakespeare Road in Brixton, centring the African diaspora. They educated themselves and others and they were part of political protests.

At the dawn of a new exhibition by BBP photographer Neil Kenlock, The Lost Legacies of the British Black Panthers, black activists and creators are hoping to re-educate the British public on the aims and achievements of their community work. We spoke to exhibition curator Mattie Loyce to find out more:

What does Neil Kenlock’s work mean to you and what was it like to work with him?

Mattie Loyce: Neil Kenlock is one of the great black photographic documentarians of the 20th century and it has been an honour to work with him delving into his spectacular archive. His work is akin to [US photographer] Gordon Parks’ and I would argue many people are just now beginning to realise its depth. He is a quintessential member of the Windrush generation, born in Jamaica and coming of age in the UK.

Through his photographic practice, he documented both the momentous and mundane experiences of black life throughout the international black diaspora. His work is extremely meaningful to me because he was able to capture moments that we can now review, reflect upon and decipher. It gives us an opportunity to “go back and fetch it”.

Working with Neil is something of a wild ride, as anyone that meets him for a few minutes can attest. He is charismatic, a big-time jokester and storyteller. He loves conversation and talking about his work.

How did he become a part of the BBP?

One of my favourite stories from Neil is the story of his first BBP meeting and how he became the “resident photographer”. Neil had been interested in the arts for some time as a teen but his mother “stated her concern” about the financial viability of an art career – so he shied away. After some back and forth he picked up a camera, one of the things she approved of within the arts, and thought he would give it a try.

Shortly after he got his camera, Neil and a few friends decided to go to a Panther meeting in Brixton after repeatedly experiencing racism at a local South London nightclub. Upon their arrival, a BBP member asked each of them what they did or what their interests were. Neil had his camera with him, and said, “I take photos.” The BBP member responded, “Great. You are now our photographer”. The rest is history.

What did you discover about them through this project?

I’m very lucky to have interviewed a number of former Black British Panthers. The thing that resonated most across my interviews was that they all shared a mutual belief in the main purpose and impact of BBP movement: rigorous education, political justice, and community activism.

They impressed the important role self-directed black education played in the movement. Meeting three to five days a week for study groups, including reading, writing, discussion, then door to door canvassing, and teaching Saturday school was the baseline – political activism was in addition to this. It was this study and building of an ideological foundation that fortified and emboldened their political and social justice activism.

Why is their story important in terms of the black British canon?

Panthers fought for the existence, empowerment and respect of black British life and people. The majority of the members were part of the Windrush generation, and although predominantly black British, there was multiculturalism within the group. At a time when “political blackness” was used in the UK, they centred people of the African diaspora but also supported issues of oppressed peoples outside of the diaspora. They accomplished a lot in a relatively short period of time, 1968-1973.

The story of BBP showcases the potential impact of community activism when galvanised in a serious and consistent way. It’s an example of young people taking history into their own hands, refusing to accept the world that was given to them, and methodically attempting to create a new one. Specific to the UK, after the BBP movement dissipated many members went on to found new groups or continue similar work with other organisations. These groups included Brixton Black Women’s Group, Organisation of Women of African and Asian Descent, Race Today Magazine, West Indian World Newspaper, Sabaar Bookshop and the George Padmore Institute.

Why do you think it’s particularly important that this exhibition has happened in 2019, as the Windrush scandal continues?

In the wake of the Windrush scandal, socio-political uprisings and the visceral questioning of citizenship and identity on a global scale, we must not forget what has already been fought for and remind ourselves what continues to be fought for. The BBP were members of the Windrush themselves, and what they now face today is a wake-up call. In the midst of this crisis, it is very clear we need to address and act upon the issues anew.

Are the new generation of creatives and activists doing enough to learn and relay black British history?

I think there are many people that are interested in black British history and it seems the numbers are consistently growing. That said, my critical hope is that when learning this history, it is not treated as cool points or a flash trend. Learning our history and sharing our knowledge is a responsibility and an honour that we all must take seriously. We can do our activism in big, small, and infinite ways; but we are not acting in our fullest power if we don’t study what happened before. I hope the exhibition is an accessible entry point for people to learn one of the many important stories within black British history.

The Lost Legacies of the British Black Panthers: Photography Exhibition by Neil Kenlock is open 19 July to 30 August 2019 at Photofusion Brixton and 198 Contemporary Arts & Learning