gal-dem is backing Labour for survival and happiness 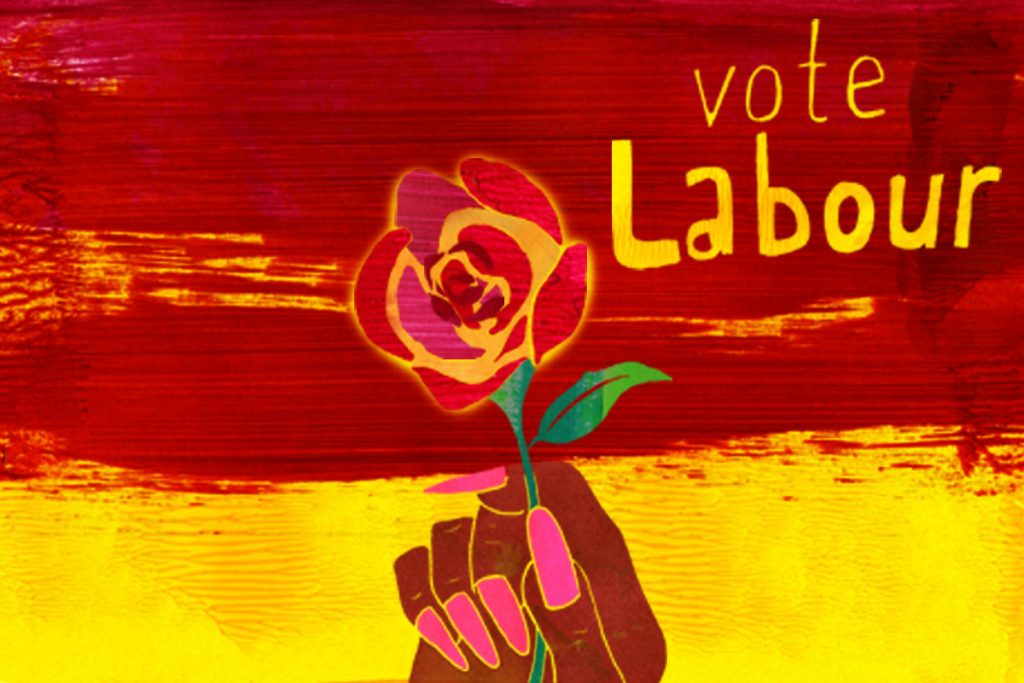 The Labour manifesto is truly a mood. It’s both the friend who cooks you a nourishing dhal to bring you back from the brink of heartbreak and the sound of voices lifted in protest at the picket line, fighting for our livelihoods because the alternative is that we will not survive.

About time too: after nearly a decade of devastating Conservative public funding cuts which have killed more than 17,000 people – co-signed by the Liberal Democrats – we so urgently need a transformative vision for the country we live in, and its role on the global stage. At gal-dem, we’ve carefully examined what the parties are offering in this general election, and we have resoundingly decided to back Labour. It is evident that Labour is the only party truly committed to social change by taking immediate action to reverse the damage done by the Tories.

The Labour manifesto was launched last Thursday (read our summary here), and its headline policies showed that the party has taken stock and is listening to the demands of people living at the sharp edge of the Conservative government policies. Commitments to implement a real living wage (putting at least £9,000 more into the pockets of workers on minimum wage by 2024), no tax increase for people earning under £80k, and scrapping the Tories’ disastrous welfare system Universal Credit are just part of Labour’s plan to end the crisis in living standards.

The Conservative’s mission to crash out of the EU will have grave impacts on the people who are least crucial to the Tory party vision: working-class people and migrant communities, and other marginalised groups. The Labour party will hold a second referendum on Brexit, meaning that we either remain in the EU or leave with a good deal which protects worker’s rights, maintains trade agreements, and upholds freedom of movement. Labour’s plan is the only defence against a Conservative “no-deal” Brexit.

Labour has also pledged to embark on a “Green Industrial Revolution” to substantially reduce emissions by 2030, create one million rewarding, well-paid jobs, and lower energy bills while also restoring the environment. However, unlike the Conservatives, Labour’s perspective on climate justice doesn’t attempt to sidestep the role colonialism continues to play in the destruction of the earth’s ecosystems. Labour states that tackling environmental degradation is “a question of justice – for the communities at home and abroad who are most affected by it”, and elsewhere promises an audit of “the impact of Britain’s colonial legacy”.

The Conservative party manifesto, meanwhile, is a shape-shifting hot mess of smoke, mirrors, and panicked empty promises. Much like the party’s leader Boris Johnson, its bumbling exterior and poorly-cobbled execution belie a dark political agenda. The Tory manifesto is more than just the same old breakfast cereal with one E-number added and “NEW!” splashed all over the packaging. It’s actually worse than business as usual; far more sinister than the faded, recycled comeback tour nobody asked for. It is a derivative, sour-tasting homage to the former prime minister Margaret Thatcher’s violent policy rampage which sought to break the back of the working class through slashing income tax for high-earners, stripping away the public sector by privatising industries owned by the state, selling off council housing, and decimating Britain’s trade unions.

The Labour Party’s manifesto is by no means perfect: their failure to more clearly foreground commitments and procedures to address institutional racism within the party, including antisemitism, in particular, is an unacceptable oversight and a missed opportunity. While the Labour party has removed candidates who have expressed antisemitic views and welcomed an investigation by the Equality and Human Rights Commission, we will be looking for further leadership from the party on this issue once elected, and continue to hold them accountable where they fall short. The Labour party has a role to play in upping the game when it comes to reflecting on its own practices – unlike the Conservatives they have made clear commitments to being proactive, rather than defensive on issues surrounding institutional racism.

“The Tories plan to dig their well-shod heels deeper into austerity, willfully plunging thousands more families into poverty while the rich get richer”

We don’t back the Conservatives because, borrowing a move now from the dusty playbook of Brexit Party leader Nigel Farage, Boris plans to introduce an “Australian-style” points-based immigration system. Australia’s violent immigration system is not something we should be aspiring to. The country’s widely-condemned offshore immigration detention estate, anti-asylum posters (endorsed by Donald Trump), and jail time for journalists who try and expose the abuses of the immigration system should read like a cautionary tale, not a wish list.

Like many of the Tories’ policies, this policy falls apart in the detail; the Australian system doesn’t require people migrating to have a job offer, and yet the Tories have touted this very premise as the cornerstone of their vision. We also don’t back the Conservatives because their public funding commitments are abysmal. Their plan to increase spending by a minuscule £2.9bn a year (compared with £82.9bn a year pledged by Labour) sends a clear message: the Tories plan to dig their well-shod heels deeper into austerity, willfully plunging thousands more families into poverty while the rich get richer.

The Labour party, in contrast, offers an inspiring, progressive vision of a fairer future; one where alternatives to draconian criminal justice measures, such as women’s centres, can be explored; no new private prisons will be built, and their proposed Emancipation Educational Trust will blaze a trail in bringing black history into the UK curriculum and taking steps to address the legacy of slavery which was spearheaded by British governments. The Conservative party’s plans are neglectful at best. At worst, its continued gutting of vital welfare support is a wild-eyed slash in the dark with a lethal blade.

The Labour party acknowledges that bosses and Conservative policies alone are responsible for driving down wages and that serious action must be taken to stop the exploitation of all workers, including migrant workers. The Labour party has made commitments to dismantle the hostile environment, through scrapping the 2014 Immigration Act and closing the Calais refugee camps which gal-dem visited last month, through enabling safe and legal passage from Europe to the UK. They have pledged to secure justice for Nazanin Zaghari-Ratcliffe, who continues to sit in prison in Tehran thanks to Boris Johnson wrongly telling a Commons committee Nazanin was  “teaching people journalism” which the Iranian authorities used as proof that she was sharing propaganda and spying in the country.

We’re voting Labour, because, at this point, this choice is the only route that can take us forward. Two four-letter slogans sum up our approach this election: “kick the Tories out” and, for those considering going rogue with their vote “don’t do anything weird”. Last week, Symran Saggar wrote about why there’s nothing tactical about voting for the Liberal Democrats, and Kimberly Arab outlined that the electoral system needs reforming, but those of us who are able to, still need to turn out and vote. Voting for a smaller party championing single issues might be an appealing prospect, but there’s too much at stake this time.

The EU referendum might have started in some circles as a genuine debate about the need for reform of an institution that isn’t fit for purpose, but it became a battle for the heart and soul of Britain – about just how racist, classist, and xenophobic the voting public could be. This vote is no different: thousands of peoples’ lives hang in the balance, and now is the time to kick the Tories out. Judging by the numerous tragedies of Grenfell Tower fire, the Windrush scandal, mounting deaths in police custody and prisons, and more, frankly we won’t all survive another five years of a Conservative government which prioritises profit over people. Communities of colour, and women of colour, in particular, are likely to continue to be hit the hardest.

This election we have a straightforward decision to make: gal-dem is backing Jeremy Corbyn’s Labour party. Our communities need transformational change because our lives depend on it.

gal-dem is mobilising to kick the Tories out. Read more here