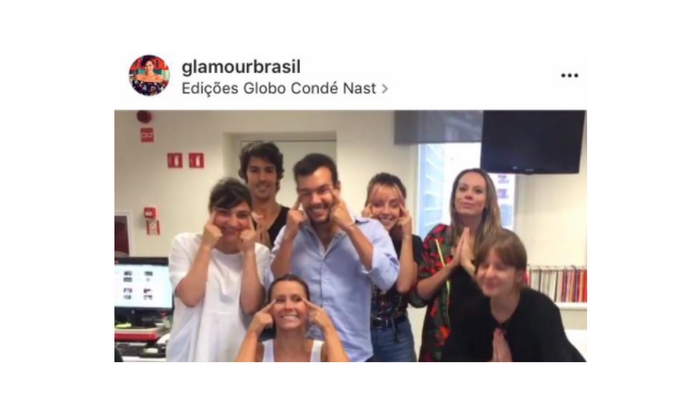 Earlier this month, Glamour Brasil announced a project with Glamour Japan by posting a picture to Instagram with staff pulling “slanty eyes”.

Despite outcry in the image’s comments section, it remained live for two whole days before it was taken down and an apology was issued in Portuguese, which, while useful to Glamour Brasil readers, was of no use to the wider Asian community who had been hurt by the original image.

Almost as an acknowledgement of this, a week later an English apology was posted. However, Glamour’s choice of the phrase that this was “considered a racist act” typifies the ignorance that surrounds casual racism towards East Asian communities.

Naturally, the internet responded. Popular Asian fashion blogger Bryan Boy pointed out that for magazines like Glamour and the fashion industry in general, the Asian community are often their biggest clientele.

The lack of wider attention given to this episode is just one of many examples of racist behaviour towards East Asian people being brushed aside as a casual, forgivable or somehow easy mistake to make. The question remains: how is such behaviour still deemed as acceptable?

Unfortunately, for anyone growing up Asian, incidents of this nature are very much a regular occurrence. Ask any Asian person and they will probably be able to reel off multiple stories of people making comments or gestures like this to their face.

I know that for me, being half-Chinese, hearing racist comments about my appearance while growing up was a more than common occurrence, often accompanied with “I shouldn’t be offended”, “it doesn’t count because I am basically white” or “learn to take a joke”.

I grew up feeling that I did need to be ashamed of my Chinese heritage. That side of my appearance was constantly seen as something to openly point out, and not always in the most complimentary way. As an adult it took me a long time to not feel nervous about entering a new situation, anxious about having to explain my Asian appearance, non-Asian name, or “where I’m really from“, not least hear someone mention my “slinky eyes”.

Sadly, I’ve come to realise that these comments will never be just playground jeers. People I know and don’t know alike still affect silly (read: extremely offensive) Asian voices, and, yes, people still pull their eyes to make themselves look Asian; all in the most casual of ways.

The East Asian community, and particularly Asian women, are stereotyped as quiet, meek and reserved. Ignorance plays a big part in the perpetuation of this kind of racism – it is perceived as more “acceptable” because it’s usually unchallenged.

The image of Asians as a “model minority” we often seen on TV and in film, of prodigious academic success and strict parenting, means that the Asian community is viewed as “having it all” or not suffering from enough blatant oppression, so why should they have something to complain about when it comes to racist comments and behaviour?

But no one should be subject to slurs on their racial appearance, and no one should have to fight back. Unfortunately these persisting stereotypes remain a key part of the problem when it comes to casual racism.

The challenge facing lots of young Asians today is the lack of strong East Asian figures in the media and public sphere. We are still not the lead figures in films or TV shows, and there are very few strong influential figures who are able to stand up to these issues. So, when debacles like Glamour Brasil’s occur, what limited media coverage they earn is rarely amplified.

What we need are more strong Asian figures who dare to champion the fight against this casual racism – not to mention the need for more allies at their side – and a drive for more Asian people to bring their experiences to light, without it needing to be sparked by racist behaviour like Glamour’s. Above all, we need to be more outraged, and be more vocal, or else we will never defeat this issue.

Every minority is still fighting for its own equality. All of us know that no one should be subject to these images in the media, or off-hand comments from their peers, or being that they should lighten up or take a joke. It can’t be just on us Asians though – it’s about time that large media outlets and influential individuals everywhere joined the fight.