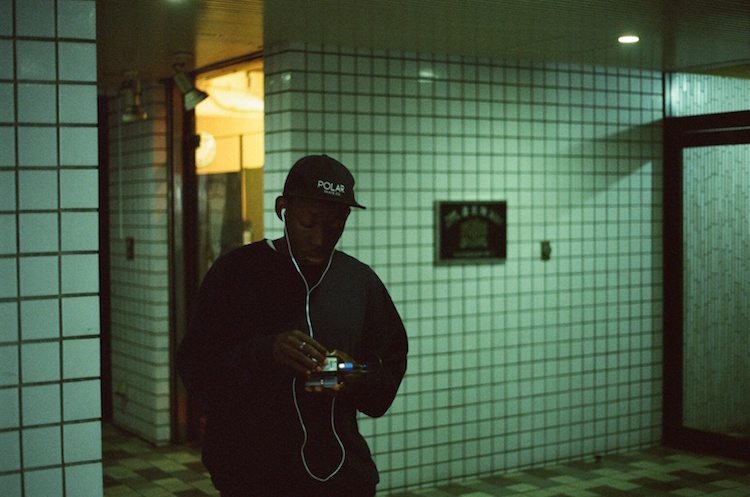 When it comes to throwing a heavyweight Dance, having a strong music selection is only one element. Radio presenter, writer, editor, DJ, host and programmer, Errol Anderson has many a string to his bough.

Transmitting  some of the world’s most watched live-streamed parties alongside the wider team at Boiler Room, Anderson – who also goes by the moniker “andwot” – has a somewhat all-seeing eye when it comes to what it takes to putting on (and sustaining) a vibe. Aside from his day job of programming, andwot is the man behind Touching Bass: “monthly dance doers” and radio show, currently on NTS Radio.

Having started out in the music industry over six years ago as a writer, eventually graduating to an editor role, you might think he eats, sleeps and breathes music. You wouldn’t be wrong for assuming so, but he is adamant that having the context behind any form of music is key. Starting out as a journalist and having his work featured in the likes of the Guardian, CLASH magazine, The Independent and VICE, Anderson has consistently taken an informed approach in addressing and trying to balance the push and pull of sub-culture which often shifts in alignment with the music he champions.

We caught up with the musical maverick to get more of an insight to his work and he provided us with the sixth instalment of our guest mix series.

“For the early risers, the late dozers and the Sunday morning snoozers. Wherever you want to listen to it, this mix was made for those times when you’re approaching or slowly escaping your duvet. This is The Rise ‘n’ Shine Mixtape.”

gal-dem: You’ve been actively engaged and working in the music industry for a solid six years now. At what point did you decide you were going to step out as a DJ and selector?

andwot: Funnily enough, I’d always thought about it but kept telling myself that I couldn’t find the time. I’d say I’ve been ‘selecting’ and playlisting music on a very regular basis since my mid teens. I started teaching myself how to DJ in late 2014 and started playing out in early 2015, but I wasn’t telling my friends that I was playing out because I was too nervous about being seen (silly, I know).

Where do you find your broad yet consistent selection?

There are a number of different sources ranging from the very human to the algorithmic. The first pot of gold was definitely my parents’ loft, where I’m still finding plenty of lovers’ rock, reggae, soul, country and all else. I’m lucky to have some amazing friends who constantly inundate me with their own stuff and things they’re listening to. I also like getting lost in the worm hole of YouTube related videos, Discogs playlists, record shops, Bandcamp and Spotify’s ‘Discover Weekly’ is a secret treasure. I constantly challenge myself to find at least 3-4 new tracks a day, which has worked out I guess.

Your selection is not limited by sounds, eras, cities or language. In your opinion, where in the world has the most exciting emerging music scene at the moment and why?

For me I’d say it’s between Melbourne and our own London. I’ve been following the Melbourne music scene for a good couple of years now. I vividly remember finding Hiatus Kaiyote near the tail end of 2012/ start of 2013, and that kickstarted a quest to find out what else was happening there. The list of artists is pretty endless, but the Wondercore Island mix series is a good place to start.

As for London, jazz (or more to the point jazz-influenced) music is budging its way to the front of the queue. Shouts to Jazz Refreshed. Artists like Nubya Garcia, United Vibrations, Ezra Collective, Yussef Kamaal, Moses Boyd and many more are adding subtle grime/garage and Afro-Caribbean influences into the mix — it’s super exciting and a movement that people will cotton on to very soon.

What was the initial motivation behind Touching Bass?

As a dance, it started off because I wanted to make a place for likeminded folk to let loose and frankly, because I was tired of hearing trap music everywhere I went in London. I’m not opposed to that music by any means, but I felt like there was such a wide tapestry of sound being ignored. The first few nights were at this hard-to-find bar/warehouse — which is now a Shoreditch-ified spot — and are etched deep into my memory. It’s where a lot of my close friends first touched base and vibed off each other. Musically it’s a place where I like the DJs to challenge themselves and the crowd with different music styles. Oh, and it’s called a Dance for a reason — the no phones on the dancefloor policy is militant.

How do you ensure that you run a thread between your editorial work, work as a host/ programmer and as a DJ and radio host?

The common denominator is discovery. I get a kick out of finding new things and uncovering old things and exposing them to a new audience. I should probably rekindle my website so as a space for the body of work I’ve amassed. Sometimes I forget what I’ve done over the years, and it’s all floating around the web.

You (Boiler Room) have hosted a series of roundtables – the most recent being the Black Lives Matter edition. Why do you feel it’s important to have these honest conversations as well as being political with music itself in the music industry?

No one topic sits in a vacuum. Politics affect music as much as technology does. Music would be nothing without social context. There’s been a little bit of heat from people that know Boiler Room for parties, and parties alone. But I think it’s equally important to use the platform for discussing issues that affect music but aren’t music itself. My mum always told me to question things, so why not use one of the biggest music entities as a forum for engaging, topical discussions.

What’s the secret recipe to hosting a truly vibsey dance?

Incense, syncopation and no phones on your dancefloor. Oh, and sofas.

What’s the best piece of advice you’ve been given?

What is on the horizon for andwot/ Touching Bass?

I’m just steadily building up a run of gigs, but Touching Bass is more the key here. There’s a family of us now (too many names to mention), and it feels good to be surrounded by such inspiring folk. Going into 2017, I’m really looking to set up shop with TB — read into that as you wish. Let me not speak too much into the universe, but I’m in no rush to make things happen today or tomorrow because I want to build things properly here. Good tings agwan.

Also, it needs to be said that what you ladies have achieved in a year is exceptional and more fittingly, necessary. Gwaaaan!