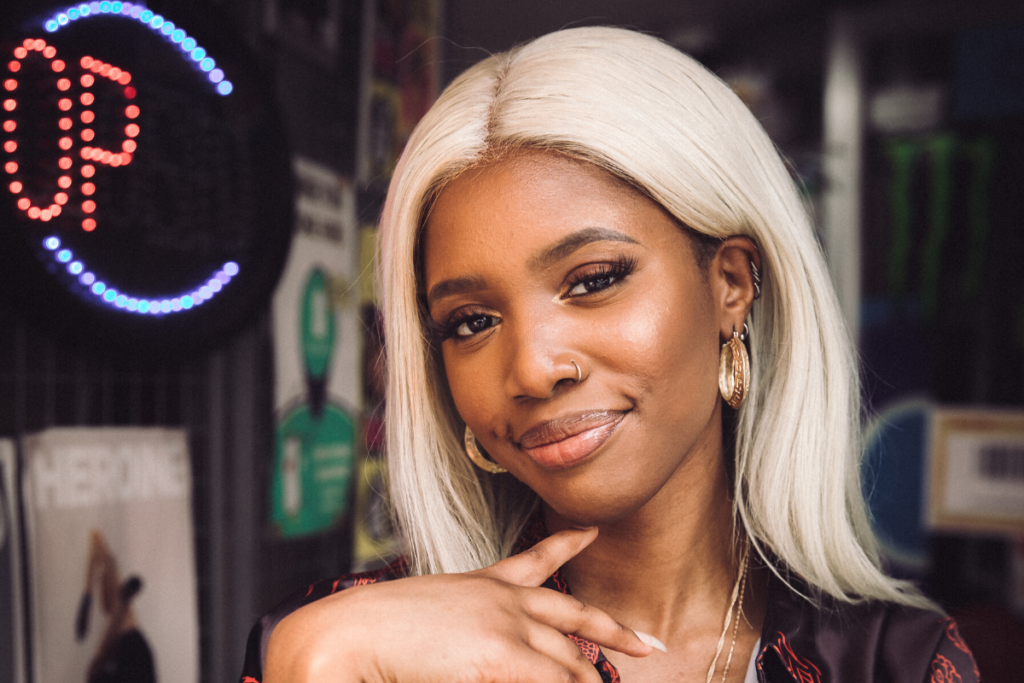 Known for her YouTube documentary series Is Your Area Changing?, the presenter and production pro talks to us about her journey.

South London presenter Henrie Kwushue is recalling the first time she realised gentrification was happening on her doorstep. “I remember sitting at the back of the 63 bus going through Peckham and looking outside of the window and thinking, ‘Someone should document this. When did all of this happen?’ It wasn’t a negative feeling, but it felt like I was watching telly. Just like, ‘Rah… this is mad different’.”

That single moment in 2017 sparked an idea. A few years later, the 24-year-old would end up making her own hit documentary on gentrification called Is Your Area Changing?

When I meet Henrie at the Sony HQ cafeteria, she tells me about the documentary’s first screening in the iconic Peckhamplex cinema just days ago (one of the only places in London you can still go and see a film for under a fiver). “I couldn’t believe how many people came,” Henrie says, fizzing with excitement as she stirs her breakfast tea. “It was overwhelming. Even Julie Adenuga hosting. I didn’t expect it!”

It was important for Henrie to tell the story through her own eyes because she lives in one of the areas affected by the rapid changes happening within historic areas of London. “I grew up on Old Kent Road, born and bred, lived in the same flat my entire life. I can’t say that I know any different from it,” she says. “I love being from South London, council-house born. I’m not ashamed to say it.”

She started her own production company, HTK Productions, in January. “It would have been easy for me to give the idea to a brand and have them say yes, but I think there’s a novelty of doing it off your own back. You have creative control over it,” she says. Plus, starting her own production company means anyone wanting to invest in a second series of the documentary will have to work with the company, not just her as a presenter.

Is Your Area Changing? is comprised of three parts (Brixton, Peckham and Dalston), with each episode juxtaposing areas in the daytime and the nighttime. “The difference between the day and night was the biggest eye-opener,” she says. “Some people say you know change is happening in your area when you see a Costa. For me, it wasn’t that, because even though I understand what having a Costa means, at least I can buy an expensive muffin. But understanding the difference between the day time and the night time made me understand why the Costa is there.”

For example, when an old school friend invited Henrie out to a jazz night in Peckham recently, she was perplexed. “It’s not that there can’t be a jazz night,” she explains. “It was just random and nobody there was from Peckham, you could tell.” Although Jazz is a black genre, “The Nu Jazz lad” has become more of a white trope and Henrie questions whether “first generation Africans and Caribbeans kids living in Peckham” are as welcome to these nights.

The documentary is for people like her. Those who no longer feel like their area is familiar, or who can no longer afford to rent the flats they’ve been living in for 20 odd years. Recent reports suggest the average property sales in Peckham have increased by about 700% from 1995 to 2019 and in 2017 it was found that 31% of residents in were living in poverty after housing costs in the borough. We discuss how times have changed and how these new “cool areas” were deemed dangerous less than a decade ago. Henrie’s mum wouldn’t let her go out in South London when she was younger because “people were genuinely dying”. According to data collected by the Met Police, the rate of all crime in the Borough of Southwark (where Peckham is) nearly halved between the years 2003/4 and 2016/7.

“I love being from South London, council-house born. I’m not ashamed to say it”

It’s estimated that over 2 million students are studying at university right now, but not everyone gets a chance to go, including those living within gentrified areas. The lack of mobility often leads to young people being left out and priced out. And going to university isn’t a guarantee you’ll be able to keep up with the rising costs either. “No one talks about what it means to be disenfranchised for someone who is actually young. You go to uni for three years and then when you come back and life has completely changed,” says Henrie.

Although all of these changes amount to gentrification, she makes a point of not mentioning the term once in the documentary. The viewers need to be led to their own conclusions, she explains. “It was meant to be a general view of what I saw, rather than me guiding the viewer to a certain point. I wanted to start conversations.”

When she was younger, Henrie felt shame about the area she grew up in. She studied hard, getting up at 5am to travel to one of the top colleges in south east London. “I wanted to be disciplined, get good grades and get the hell out of there. I wasn’t there to make friends,” she says. She recalls the moment someone at uni told her she was “just a typical black girl from South London” and feeling like it was meant to be a put-down. Now, she understands there’s nothing wrong with it. “Why did I want to be that different? When being the same as people they compare me to was just as beautiful if not more. You do internalise it. As you grow up and become more comfortable with your own identity, you realise that as a younger person you definitely had an identity crisis. Every time someone says that to me now, I’m like ‘YES, I am.’ Say it some more. Let me know. It’s a compliment.”

University wasn’t easy. When Henrie was studying in Leeds, she felt “damaged” by the newsrooms she worked in, a requirement for her broadcast journalism course. “I explained to them that I’m dyspraxic and really tried my hardest. They’d have me sitting at a desk and I wouldn’t be given work for six hours straight. And when they did, they’d give me the brief so fast I would miss the name of the person I was meant to call.” She confesses that thinking about those painful memories makes her want to cry sometimes.

But things got better, Henrie learned to DJ and got involved in student radio. “Music was why I got into radio first and foremost. I love being technical about things. I think having dyspraxia pushes me to learn things even more. DJing requires you to do more than one thing at one time and I love the challenge.” Now, Henrie is a radio presenter at Reprezent FM, a youth-led radio station based in Brixton. In December, she also did her first ever BBC Radio 1 show. I ask her for one piece of advice to anyone who wants to get into presenting. “Be yourself. Be authentic. Don’t be anything but yourself, because there’s going to someone out there who will identify with you. If you think you’re awkward, shy, a bitch or funny – just amplify that by 10. It’s cliche but true.”

Henrie is grateful. She thanks God and those who inspire her and motivate her to do the most: Sian Anderson, Maya Jama, A.Dot and all the women in her management are among many of the names. “Sometimes I get overwhelmed by how much everyone is doing,” she says. Comparison culture in the creative industries is overwhelming. “I’ve had to get myself out of a space because I was really depressed and comparing myself to other people all the time. But then I took the comparison out of it and took it as a benchmark in my space and time. Comparison is the thief of joy.”

Henrie has big plans for the future. She wants to find more minority talent through her production company. Her plan is to nurture ideas no one else will take on. “I would love to put out some more fun creative content through my production company. I want to have a real platform that does real things. We’ll see how that goes. Hopefully at the end of this series, I’d love to take it globally.”

Catch the most recent episode below: