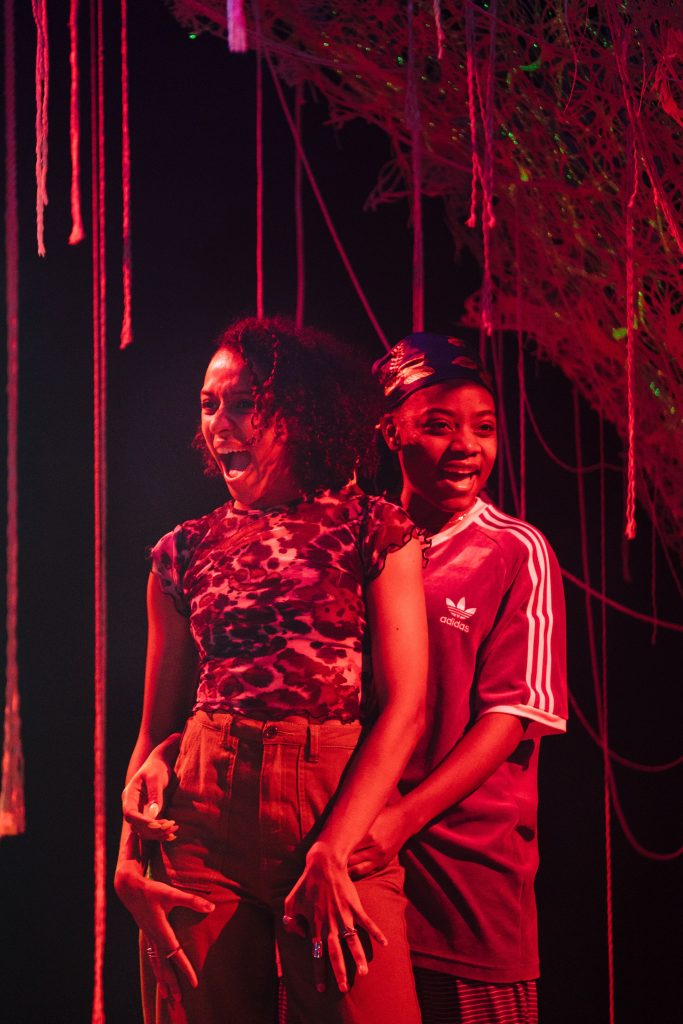 My relationship with the Kardashian/Jenner family has always been quite complex. As a black woman I feel they’ve looted so many aspects of my physicality, from my full lips to my hair. The title of seven methods of killing kylie jenner (stylised lower case), a new critically acclaimed play finishing of a sold-out run at the Royal Court in London, is enough to provoke intrigue. It doesn’t give much away. But in playwright Jasmine Lee Jones’ own words, her play can be summarised quite simply: “Crazy, young, and black.”

As well as looking at the world’s most famous reality TV family, this play is an honest portrayal of how black women navigate through society, especially in the digital age. Twenty-year-old Jasmine manages to discuss serious topics while making you belly laugh. She developed her skills as a writer through the Royal Court programme which aims to create pathways for young theatre creatives.

The play follows two black women Cleo (Danielle Vitalis) and Kara (Tia Bannon) discussing the news that Kylie Jenner has become a “self-made billionaire” at the tender age of 21. It begins with the women dragging what appears to be a body into a basement and then the rest of the play takes place in Kara’s bedroom.

Weaving in interactions from Cleo’s anonymous Twitter account called @incognegro, the play includes examples from her tweet thread against Kylie that ends up goes viral in a matter of hours. “Inside that tweet is hundreds of years of anti-blackness, positive affirmations of capitalism, cultural appropriation… in under 50 characters it colludes in the systematic historical and present-day dehumanisation of the black female body and the buttressing and idolatry of white womanhood in abusive hegemonic white infrastructures,” says Cleo.

Then the thread takes a darker turn. @incognegro tweets: “Hashtag ‘kyliejenner fi ded’, yes that’s right Kylie Jenner can gwarn and get deaded!” During the rest of the play, she starts to describe the seven methods she would use to kill the Kylie Jenner. Starting off with method 1: death by poison. “Kinda like the temporary lip fillers that helped you gain acclaim. For bringing fuller lips into fashion,” she muses. With every method, it appears that Cleo wants Kylie to ponder on the ways in which she became wealthy.  For example, method four suggests she could be skinned so that our protagonist can wear her as a disguise. “So I can get inside and don her coil, mimic her race, and walk around in whiteface for a day.”

Throughout the play, Cleo and Kara act out the voices of the Twittersphere. “The tweets seen in the play are merely a cross-section of the tweets that come about as a result of @incognegro’s methods; they are the ones that affect and encroach upon their world the most,” Jasmine tells gal-dem over the phone. Before the actors go into the Twittersphere the stage lights begin to flash and whilst in it the actors take on different accents and body movements to act out the tweets.

“With every method, it appears that Cleo wants Kylie to ponder on the ways in which she became wealthy.  For example, method four suggests she could be skinned so that our protagonist can wear her as a disguise.”

Aided by stripped-back stage design, the space ignites your imagination. Bringing an online space to the stage without an intrusive digital screen is very challenging but this play did that effortlessly thanks to the protagonists’ uncanny ability to code-switch and dive into new dialects. Visual cues such as bluish LED lighting accentuated the idea.

The use of the Twittersphere is one of the play’s greatest assets, as it perfectly demonstrates how people react to “woke” discourse on social media. As the thread starts to become viral @incognegro starts to receive racist and misogynistic abuse. One Twitter user even sends her an image of a black woman being lynched. The play brings the digital anxieties of being a vocal black woman online to the stage. Though this dialogue is fake, it’s something you can imagine seeing on your timeline. Especially since a recent Amnesty International report found that black women are 84% times more likely than white women to be mentioned in abusive tweets.

Jasmine wanted to explore the relationship black women have with social media and the online space. “Are we ever really free? Is Twitter just a reimagination of real-life, where all the structural systems are still in place and still oppressing us?” She was interested in the ideas of “freedom and particularly duality, particularly with black women and femmes and non-binary people just living on the crux of two or more identities and how exhausting and exhilarating that can be having an online and an offline identity.”

Traditionally, the theatre is a space for the white middle-classes but plays such as this are changing that narrative through the use of language.

“I like the idea that there’s a labour that white people might have to do or older people have to do to understand young black women and femmes in the audience. I didn’t intend on doing that, I just wrote. It’s not my goal to make white people uncomfortable it’s my goal to write something I think is authentic,” Jasmine says.

Most of the language used in the play was a mixture of acronyms general slang used by young people of colour and in online meme culture. From Kara telling Cleo that she’s “chatting out of her batty crease” to the dialogue being seasoned with the odd “DPMO”, and “FFS”. This play is a nod to London youth culture.

It’s innovative to bring memes to the stage, dispelling the idea that things need to be understood by the old guard to be high brow, or that internet youth culture is vapid. Memes embellish our daily conversations so it’s only right that they appear in a play about our lives. From the “Why the f*ck you lying, why you always lying?” vine to the recent double-take clip of Drag Race star Jasmine Masters saying “And I ooop”, it unpacks how these coded hilarious images creep into the digital space even in the most serious of conversations. And, through the rise of Black Twitter, memes have contributed to the way we interact with our identity in the diaspora.

“I had like a meme document and a gif document so I could look at all of them and eventually, it became like a language”

“The truth of the matter is I did spend a long time just writing a list of memes so they’d be in my head when I was writing,” Jasmine says. “Some of them I know more but all of them are my personal favourites. One of my personal favourites is ‘I’m a bad bitch you can’t kill me’. I had like a meme document and a GiF document so I could look at all of them and eventually, it became like a language. ”

Despite the provocative title, seven methods of killing kylie jenner is more witty than sadistic – a masterful mixture of discourse from the diaspora. Jasmine deals with colourism, DSTRKT’s door policy and shouts out to the shaku shaku dance craze in the process, using Kylie as a conduit to set her agenda.

But by centring her culture, language and opinion in this innovative dissection of pop culture and the digital realm, she’s taken power out of the hands of black imitators and instead chooses to hold an authentic mirror up to young black womanhood in the UK.