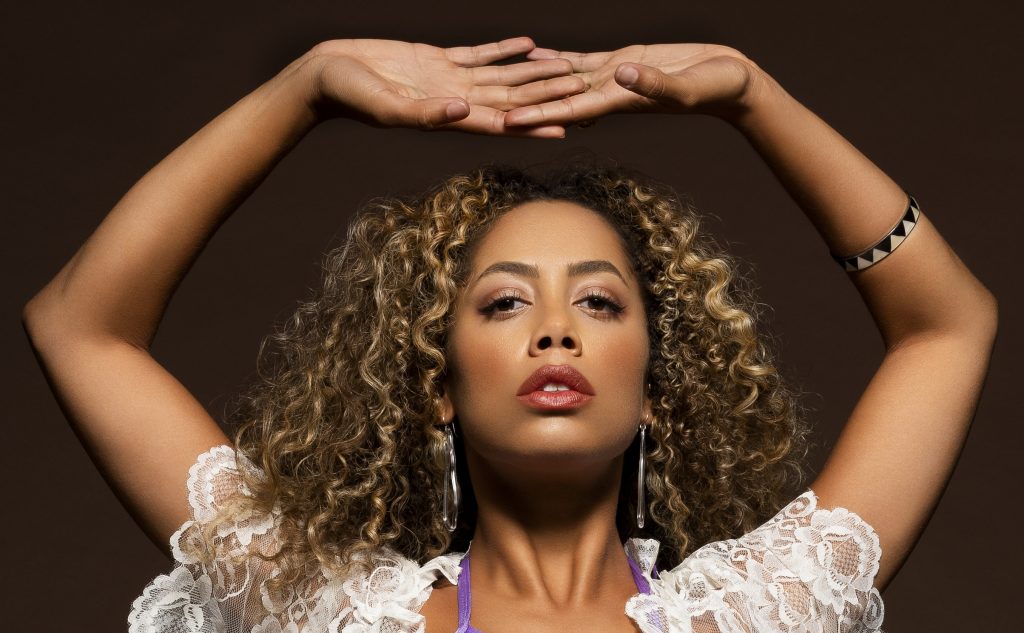 When most of us think of Jayda G, memories of her high-energy Boiler Room set at Dekmantel come to mind – a DJ completely enthralled in her own funky groove selections. Considering the main talking-points after a Boiler Room set are usually focused on the weird antics of the crowd, Jayda did well to hold the spotlight. She’s a DJ who’s not afraid to get lost in the moment, making her shows as fun to watch as they are to party to.

It’s one of the many reasons why Jayda is so in demand: she consistently packed out a four-week residency at Brixton night-club, Phonox, held two intimate talks on climate change, and has been recently announced as a new resident DJ on BBC Radio 1. All in one month. “It’s so weird to have this packed schedule – I am used to having a more flexible week where I can sporadically make music, workout, chill and then tour on the weekends.” She laughs, “I mean this month in London was supposed to be both a ‘chill’ and a ‘work’ trip, but I am not seeing any of the chilling so far!”

Jayda is in London gearing up for the release of her debut album, Significant Changes, which was produced alongside her Master’s in Environmental Toxicology, where she explored the effects of human activity on the orcas of Vancouver. The title of the album was the most-used phrase in her final thesis and illustrates how entwined her love for science is with music. Significant Changes reflects the infectious energy and eclectic taste of Jayda, drawing heavily upon Chicago house, disco, and soul influences. Jayda and I sat down together at record label Ninja Tune, chatting about the creative process of producing her new album, enforcing personal boundaries, and the lack of diversity in dance music.

gal-dem: How is it living in London for a month?

Jayda G: I love it! I have always loved London; I came here when I was 19 and remember being like, ‘woah! This is the first place where I see people that look like me.’

You come from Canada though, isn’t it fairly diverse?

Mmm, depends where you are in Canada. I grew up in a small town with like 4000 people and I was the only person of colour in the majority of my life. When I was working in biology, we didn’t tend to come across a diverse range of people. Most of the time you are doing research in small labs in the middle of nowhere, so it’s great coming to London.

“My scientist friends all joke with me like…you’re a DJ…this is so weird?”

It’s cool that you can whip out this hidden trivia that you’re also a scientist.

Yeah, it’s funny because my scientist friends all joke with me like…you’re a DJ…this is so weird? I’m like, yeah dude this is as weird as this is for you as it is for me [laughs]. I have over 10 years’ experience in the sciences. Science has always been my main career that I set out to do, and have spent a lot of time and effort on, so it’s ironic that my fans and people in music look at me as a DJ before a scientist!

I think the secret is out now though with the album. What was the intention with your album? You range from the sombre sounds of ‘Orca’s Reprise’ and ‘Missy Knows What’s Up’ to the funky, disco hit ‘Move to the Front’?

Well, I love vinyl and I play all of my gigs in vinyl, so I really wanted to make a record that works best for vinyl. I wanted each side to be a piece onto itself so that when you flip it, it makes sense for that section of the album – that was a huge inspiration in structuring the tracks. I wanted the record to build up in a certain way; the mood starts off slow, continues on to more deeper tones then it brings you back up to a more upbeat, disco vibe. It kind of reflects how I do my DJ sets. It was definitely a well-thought out plan.

Did you intend to do your album alongside your master’s thesis on the orcas of Vancouver?

You know what, it is really hard to think of these things after the process – I felt like I thought it, I regurgitated it and it was done. [laughs] No, I am playing, as an artist when you’re making art you are influenced by your experiences, and what you’re going through at the time, so when I was making the album there would be these moments, like in the song ‘Missy Knows What’s Up’, where I sampled a radio talk of the Canadian biologist, Misty Macduffee, who won the landmark case that led to the funding of my research.

Yes! And I was listening to her radio talks and I was thinking that I should add this to a track. DJs always want to add these cool, mysterious snippets from back in the day, so I was like yep…mine is going to be about killer whales! [laughs] My work bleeds into each other.

It seems like a very fluid stream of creativity, right?

Yeah, this album represents a lot of my scientific thesis but also represents a lot of shit that went down at the same time. I upended my life and moved to Berlin whilst doing my thesis and completely changed my day-to-day. I was a grad student and then, all of a sudden, I am a touring international DJ living in Berlin – in a country I don’t really know or identify with at all. My professor was totally supportive of my move, and I was super confident at the time, but I definitely look back like damn, that was hard.

Do you have any advice for any upcoming women DJs of colour? I can imagine it’s probably a lot easier now to break into music than it was when you first started?

I am not too sure how much has changed though – there are still very few of me around. I remember I had a show with Honey Dijon, and she was like ‘Yo girl, it’s not every day that there are two black girls spinning house together on stage’… and I was like, you are right, this never happens. I mean I live under a rock so maybe there are more, but I haven’t seen that many.

No definitely, as someone who loves house and techno, I jumped at the chance to have a chat about this as I rarely see black house DJs apart from the Chicago/Detroit legends.

Yes, it’s true, we need representation and I get emotional about this because we all know how that feels – not seeing yourself in the media and in the things that you love. I remember this girl came up to me and she was a woman of colour and what she said made me so sad, but happy at the same time. She said that when she started DJing she thought she had to sound a certain way and cater her sets to fit in this very generic sound, but when she saw my set, she knew that she could be her and didn’t need to adapt her sound. The greatest gift we all have is to be you – there is no one that is like you. You are a special entity on this earth, and that is all that you have so you might as well use that.

“I am very controlled about my image and what I identify with. Black women with natural hair is a thing, and it has a lot of pride – we have had to go through a lot of shit to get to a point where we feel comfortable wearing it how it is, and you are not messing with that. “

A lot of people forget that in the industry and try to fit in this mould.

For sure, I have to check people all the time especially when I am doing my photo-shoots. They want me to look a certain way that doesn’t reflect me. I am adamant that I will not straighten my hair and that at all my shoots, there is someone that can style afro-hair. I am not going through that painful process of you not being able to manage my curly hair and then you are like ‘oooh let’s straighten it; let’s make it sleek’. It’s just so boring. So, I am very controlled about my image and what I identify with. Black women with natural hair is a thing, and it has a lot of pride – we have had to go through a lot of shit to get to a point where we feel comfortable wearing it how it is, and you are not messing with that.

It’s a shame that we still have to say this in 2019. Why do we still have to explicitly state that we need someone who is able to do afro-hair on shoots, or make-up artists that have experience working with darker shades? This should be normal.

Exactly, and that’s why Rihanna is a multi-millionaire with Fenty – it’s a no-brainer that people would want her products. I want to be the Rihanna of DJing. Obviously, I won’t because I am me [laughs] but I like to think so.

Well everyone knows you as the DJ with so much energy!

That’s pretty accurate, it’s all genuine especially the dancing, so like if I’m feeling it, you’ll know and if I am not, then I won’t be dancing.

I am always the clear minority, both in gender and race, when I go to techno events, and it’s really strange.

I don’t know what’s happened! There has been so many times when I have gone to an event and there is literally only one of me. I don’t understand it because the vast majority of what I play is produced by black people, even the old 90s house tracks. I live for Chicago house.

Whenever I do see black people at these events, we are always the ones dancing the hardest!

I know! When I was in Geneva, I was doing a show next door to a trap night, and when that finished literally all the black people came into my room and they were loving it and it was such a vibe, so I told my agent ‘these are the kind of shows I want to play more of!’

That’s why it’s so important having women like you behind the decks; representation matters.

Totally! I feel like it’s slowly translating, I often have moments where more and more people of colour are coming to my shows and whenever they are there, they are the ones front and centre, dancing and vibing the hardest. It’s so important – we need to support each other more and collaborate with each other. Those things matter. This music isn’t just for white men – it’s for everyone!

Jayda G’s debut album, Significant Changes, is out now on Ninja Tune. You can listen on Spotify.