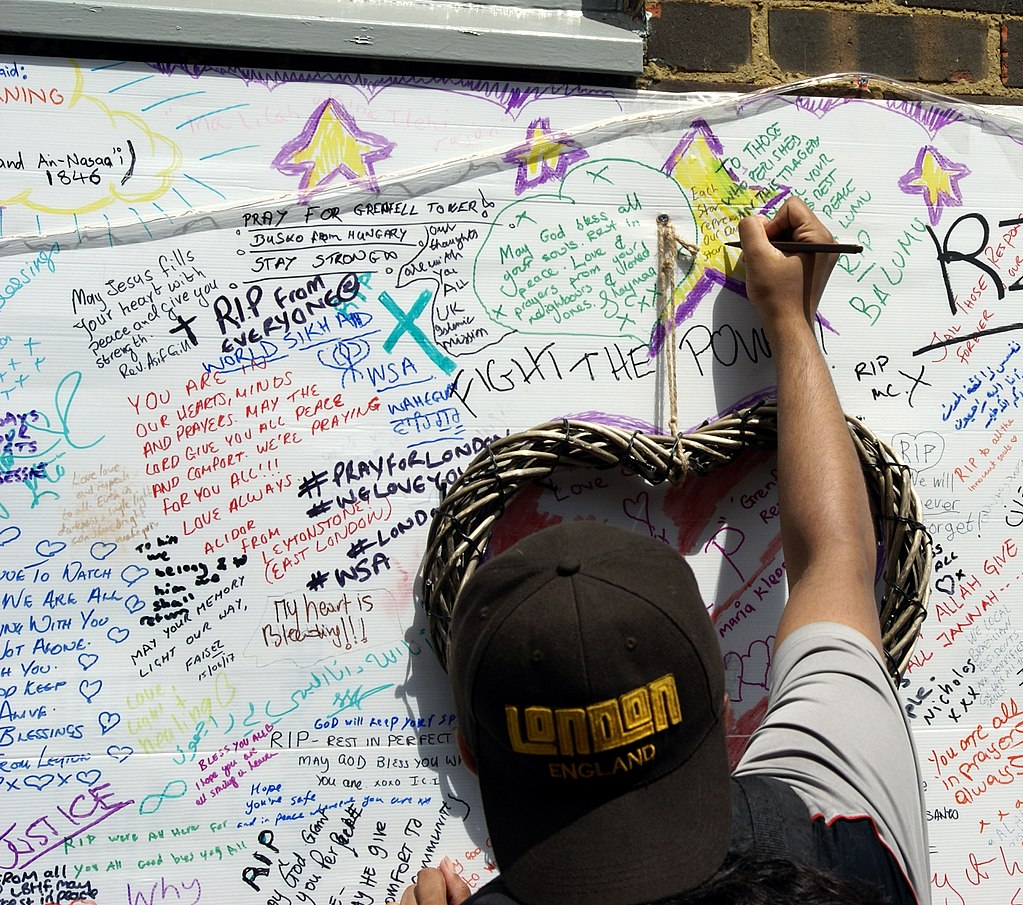 On 14 June 2017, as smoke continued to plume from Grenfell Tower, I woke up to a series of frantic messages trying to establish whether the children I worked with at Solidarity Sports were safe. Solidarity Sports works mainly with children in the borough of Kensington and Chelsea, who come from disadvantaged backgrounds, or with those who have experienced trauma. Two children, Firdaws and Yahya, were unaccounted for.

Some volunteers searched hospitals where it was known that survivors of the Grenfell Tower fire had been admitted, and others stuck up missing posters around the area. However, as time passed, we came to our own conclusion that the two children were no longer with us, and had passed away in the tower. We soon learned that the whole family – Firdaws, Yahya, Yaqub, Nura, and Hashim – had died together on the 21st floor.

We took time to consider how to respond to the tragedy. Acceptance and grief simply weren’t enough; we had to make sure people knew who these ordinary yet extraordinary people were. We learnt that one of Firdaws’ dreams was to go to Euro Disney. Therefore, since last year, we’ve been taking children to Euro Disney in honour of her memory. This is part of the Hashim Family Legacy – a project to remember the family – which ensures that they continue to impact lives even though they’re no longer with us.

“We can do this for ourselves. With calamity comes the need for connection”

In the wake of the fire, the community of Latimer and Ladbroke Grove have demonstrated that they’re more than self-sufficient. I spoke to Rajaa, 18, who is a local activist and member of the community. Rajaa believes that the community’s work has shown that “We can do this for ourselves. With calamity comes the need for connection. Many outsiders have come into the area, that’s why it’s so important for grassroots organisations to continue to do the work they do. It’s done by the community, for the community.”

Within the first few hours after news of the fire had spread across the borough, community centres and places of worship set up donation points and shelter, organising themselves with no assistance or communication from the council. Furthermore, these community groups and focus points have ensured that Grenfell isn’t forgotten and that politicians keep to their promises of obtaining justice for those who were affected by keeping the issue alive within the community and public eye. Zeyad Cred, a local resident, organises monthly silent walks on the 14th of every month to honour the lives of those lost and to keep social cohesiveness consistent.

My favourite project which supports those affected by the fire is the Wall of Truth, which is emblazoned with the phrase: “The truth will not be hidden”. For me, it represents taking back the narrative around what happened that night in June from the media, and giving it to the people. There are accounts of what people saw that night written on the wall and now, more than ever, it is crucial to ensure platforms and spaces are provided to give these a voice. Efforts like these show something I don’t think the council could ever achieve: they establish a connection with residents and provide a space to value and hear their thoughts.

Raaja has been involved in many art projects including with Ferarts, which supported young people in the community to capture life after Grenfell through photography, video, and art. The project was conducted in partnership with i-D magazine and the Design Museum, where an exhibition was held to display the work. Rajaa described her work on the project as a form of art therapy, and explained that it provided a creative outlet for coping with the impact of Grenfell Tower fire on young peoples’ mental health. Rajaa emphasised the need for accessible mental health care in a post-Grenfell environment. She remarked: “The area is culturally diverse and with that comes a stigma surrounding mental health. People didn’t acknowledge it and wouldn’t talk about it. But after Grenfell, people have made an effort to ensure that everyone is doing well, whether that be through talking to one another or seeking counselling.”

“We’re calling for justice but I feel like a lot of young people don’t know what justice is, including me”

We discussed the possibility of achieving justice for Grenfell, and Rajaa spoke honestly and critically about efforts that have been made. She explained: “We’re calling for justice but I feel like a lot of young people don’t know what justice is, including me. How do we recognise it? Even if they do give us justice, how do we know it’s the justice we need?”

At this stage, considering the support needs identified by the activists I have spoken with, the government’s main priority should be to re-establish trust with the community through clarity and good communication. Many have lost faith due to the false promises made by Theresa May to provide housing for survivors within three weeks after the Grenfell fire. Over a year has passed since the fire, and families we work with at Solidarity Sports are still living in hotels. This is just one example of the government providing an unacceptable service to the people who most need support.

Although the ongoing public inquiry that will examine the circumstances which led to the fire offers comfort to some, many feel that it is “too little too late”. The government also has to ensure that sentences are given to the appropriate people or bodies, as I share the view of the community that what has happened is criminal. Many still feel pessimistic about the prospect of justice being obtained but are trying to hold onto the hope they have left. It’s not enough for Theresa May to say she regrets how Grenfell was handled; what people need is action and results, fast.