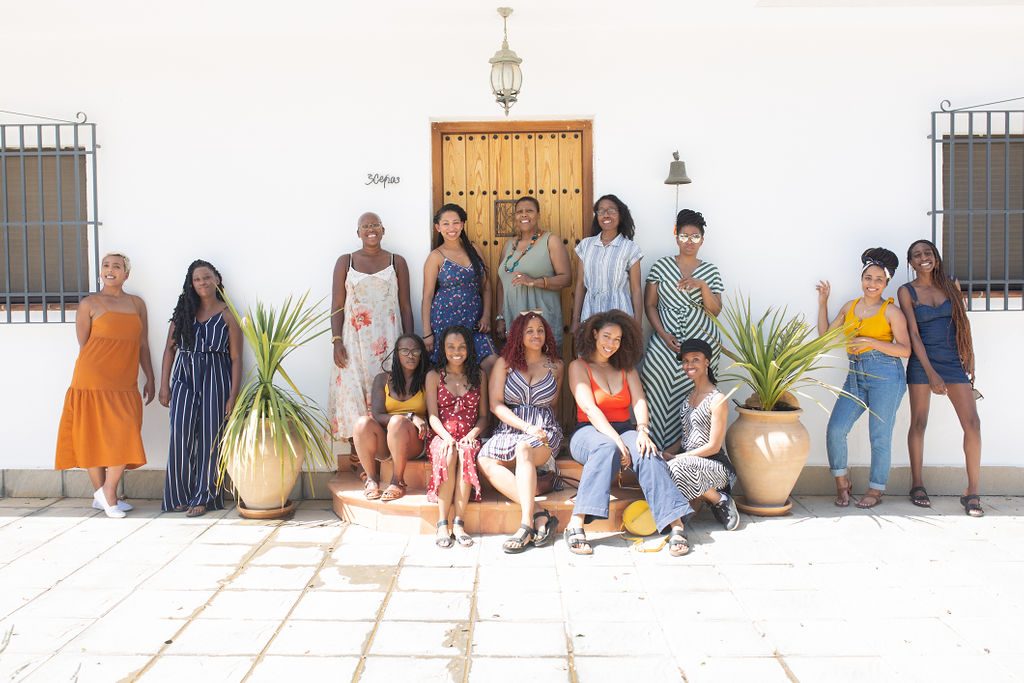 Over the past few years, I have noticed an increasing number of tailored retreats and group holidays for black women. As well as Instagram pages, influencers and blogs highlighting the perks and perils of travelling whilst black, many companies offer tailored trips to black majority countries. Some create safe spaces for minorities to travel around where their presence may not be common. Because let’s face it – in 2019, who’s really got time to spend their vacay worrying about microaggressions?

Birthed right before the influx of black travel groups, Las Morenas de Espana began as a popular blog but has become a game-changing group trip open to women of colour (WoC). It attracts mainly black women from the UK and USA. The retreat is both educational and relaxing, offering something a little deeper than your average Spanish holiday. Women are selected on the basis of whether or not they will be a fit, based on the content within their applications. There’s high demand for their experiences and after spending a week in Javea with them, I can see why. A week with Las Morenas taught me that group trips are all about the vibe and the tribe, and I was super impressed when they managed to nail both.

“Las Morenas draws women in search of an authentic cultural experience, and those looking to develop the skills they need for living or working abroad”

The getaway runs one to two times a year in various locations throughout Spain and draws in those searching for an authentic Spanish experience, and others looking to develop the skills they need for living or working abroad. My experience, which was gifted by the company but usually costs £1112, takes place in the charming, coastal town of Javea in Alicante. I snagged flights from London for just £45 return (win), and upon arrival I am greeted by my own driver from Las Morenas, before being welcomed into a sprawling villa, dotted with palm trees and complete with a large pool and a ready-made group of new friends.

One of the Las Morenas founders, 27-year-old Sienna Brown, gives me a warm hug and huge smile before showing me to a double room decorated with artwork depicting sunsets and savannahs and containing a tailored welcome-pack. I study its contents: a notebook, bottle of local wine, and a variety of travel-sized soaps and hair products for afro hair that Sienna has hand-picked from black businesses. I’m already impressed.

“We collaborate with a bunch of brands that we think women of colour will like, so we can give something a little special at the beginning,” Sienna smiles. After settling in, I’m whisked off for a delicious, pre-arranged evening of local tapas and wine in a gorgeous restaurant, off one of Javea’s enchanting cobbled streets. Large plates of soft, white bread and Iberico ham appears as if by magic and the evening is peppered with frank, funny conversations with the nine other attendees, all African American women. It is an unforgettable start.

Las Morenas began as a blog founded by Sienna in 2014, after she spent some time in Madrid. “I wanted to create a platform where people could share their stories about being black in Spain. The narrative was really negative and I found that super frustrating because that wasn’t my experience,” she explains. After moving to Spain permanently, Sienna connected with Danni Washington, who had left the USA to work as an English principal. The pair began to offer retreats geared towards black women and the brand took off.

And it’s easy to understand why. Las Morenas is intimate without feeling constrained, and myself and the other women, aged between our early twenties and late fifties, get to know each other over a communal DIY breakfast each morning, before taking yoga classes by the pool with Danni. We have a series of informative workshops throughout the week; Danni teaches us about being black in Spain, and Sienna holds Q&A-style chat about the realities of starting a business abroad. The energy is nothing short of effervescent, and it trickles down from Sienna. Her passion for motivating other women is clear, and throughout the week, I notice how she takes the time to dig a little deeper with each attendee, asking them about their hopes and dreams for the future, nudging them a little closer to achieving their personal goals.

Free-time is spent either strolling to the nearby beach or grabbing mojitos in the town. One afternoon Sienna and Danni lead us on a breathtaking cliff-top hike; I talk frankly about relationships, work and developing a black consciousness with my new friends as the sun sparkles on the bright blue Mediterranean waters below us. I realise what a privilege it is to be able to talk freely with women I’ve just met – none of us are conscious about censoring ourselves, each of us eager to share knowledge. One woman from Philadelphia, in her mid-twenties, tells me that Las Morenas is her first trip outside the United States.

“I talk frankly about relationships, work and developing a black consciousness with my new friends as the sun sparkles on the bright blue Mediterranean waters below us”

As we move around Javea and Sienna introduces us to her local friends, I notice how incredibly warm everyone is towards the group. In founding Las Morenas, Sienna and Danni have created a force. Not only does the brand work with and support local businesses, but it’s an informal cultural exchange between the locals and women of the African diaspora. I recall past group trips to Zimbabwe and South Africa where I felt the weight of being the only person of colour acutely. Here, amongst other black women, I feel free.

The real highlight of the week (aside from a very boozy mid-week night out in a tiny bar) is a cooking class in our villa. Sienna arranges for a local culinary school to teach us how to fry calamari, make paella, and knead coca dough (a traditional Spanish flatbread) as we sip on red wine and recount the week’s best bits. After prepping the food, we tuck into the meal together around a large table, toasting to our successes.

My trip ends with all of us writing tailored words of affirmation to one another as parting gifts. Sienna tells us to come back to them any time we feel demotivated. It’s a nice touch. “We’re trying to expand Las Morenas and are super intentional about what we want to create, the words we use on the website, the feelings we want to invoke and who we want here,” she says. “But at the core of everything, we’re still trying to show people a different side to Spain that goes beyond Madrid and Barcelona.” I tell her that I foolishly thought I was “done” with Spain after a series of family holidays made me think I’d seen all I needed to see by the time I was 21. Sienna laughs.

On the plane home I think about how very wrong I was.