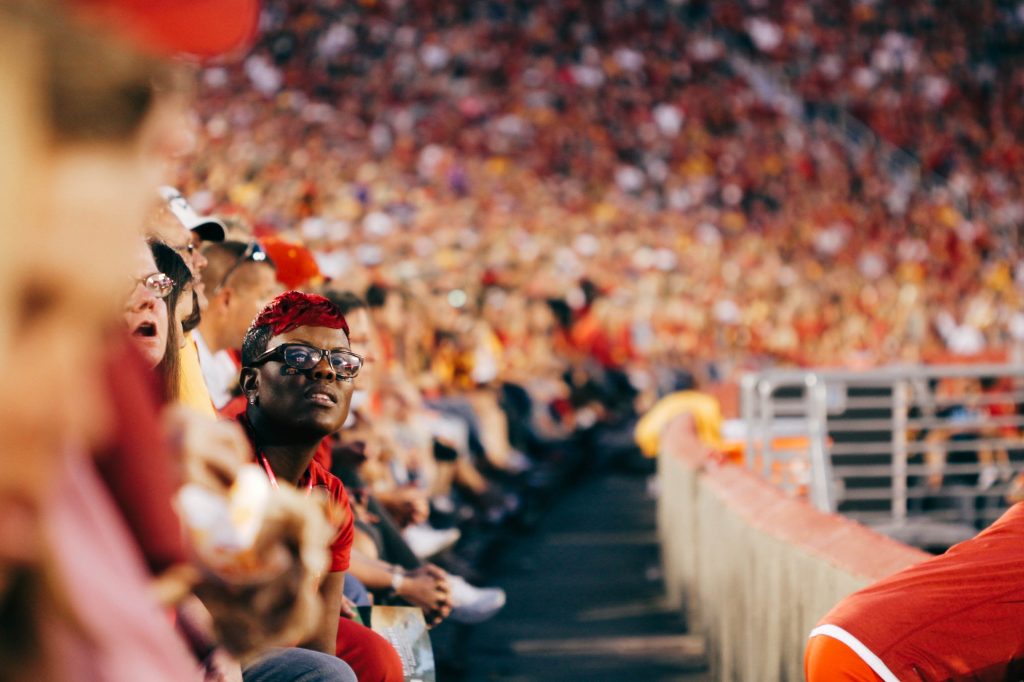 Football is coming home guys and I’m revelling in it. This World Cup has been a bit of a roller coaster for me considering I’ve devoted a lot of time to religiously hating football. I’ve learned to tut whenever it becomes a focal point of conversations with male friends, I roll my eyes if ever my boyfriend checks BBC Sport. I’ve even taken to strategically leaving the room or a house if I so much as hear the Match of the Day theme song. Alas, I have had to admit that it is quite exhilarating to see the team win.

On Tuesday, England came up against Colombia in a nail-biting semi-final match that left me on the edge of my seat with my heart in my throat. After looking like a clear win, a sneaky goal resulted in extra time, before eventually leading us to penalties – which I was told England aren’t very good at. Yet we won, and what started off as a casual viewing became full-fledged elation. We did it. I, like the rest of the country, felt like we had achieved something even though most of us were just slumped in bars, half-cut on a school night. People poured into the streets singing and cheering and cars beeped their horns for “INGURLAND!” And I cheered with them.

However, there’s still something I can’t reconcile with. As a woman of colour who fiercely opposes banal nationalism, toxic masculinity, and Britain’s penchant for taking over literally everything – I’ve found myself cheering all of these on. During extra time when the team seemed to be shying away from the tenacious Colombian team who were ready to fight until the end, I texted my friends: “Where is that same energy they used to invade most of the countries in this tournament?” I was willing them to be bullish while also taking the piss. “Serves England right. Terrible at its own game.”

“Where is that same energy they used to invade most of the countries in this tournament?”

So much has been discussed in the run-up to this tournament about Russia’s social problems that many have forgotten our own. Raheem Sterling has been vilified in the UK press for everything from wearing Primark to getting a commemorative tattoo for his deceased dad. As we’ve previously seen, when people of colour are winning for our country they are treated favourably, but it is not that hard to fall from grace. So as it’s been 1,000 days since he last scored for England Sterling has become the black sheep of the team. Each dig is laced with racial undertones. Any people of colour watching that unfold can’t help but feel like their association with the team is more conditional than for white Brits.

You can see these tensions unfold on Twitter. Some people of colour actively decided to support Colombia in the game. “I’ll support England the day engerrland (sic) supports me,” wrote Ruqaiya Haris who often writes about feminism and Islamophobia. For people like her it is bizarre to find yourself singing “football’s coming home” alongside gammon who, in other circumstances might be telling you that this country isn’t actually your home. UKIP eventually chimed in. “Congratulations England. It’s coming home!” they tweeted. “You’d probably stop it at the border,” one user replied.

Of course, you can’t make this assumption about the majority of football fans because you don’t know them all individually, but cheering on England is difficult considering this land means different things to different people. Especially right now. This “us versus them” rhetoric is the exact sort of rhetoric we’ve needed to steer away from in the last couple of years.

Little Britain is already dominating the public conscience with the unbearably divisive Brexiteer rhetoric begging to “take the country back”, with hate crimes up by almost a third last year. So when you read that a planned protest in Leeds calling for EDL founder Tommy Robinson to be freed from jail has been postponed because it clashes with the match against Sweden on Saturday, you feel a bit conflicted.

Where do you draw the line between harmless displays of patriotism and the more insidious nationalism that has crept into the mainstream? Because there’s just that little bit of you that flinches when a fan screams “Fuck (insert other country’s name here)” and you fear that xenophobia might kick in during the pub commentary.

It’s a welcomed distraction to forget the fractions within the country and cheer on what actually is quite a diverse squad in a pub full of bloated and blushing blokes, rubbing each other’s heads and bearing their bellies. We all have different ideas of what England is yet we’re cheering as if it’s the same.

Let’s hope that we can maintain this unity because if football really does come home then right now, it’s to a broken one.