Lupita Nyong’o is afraid, and you should be too 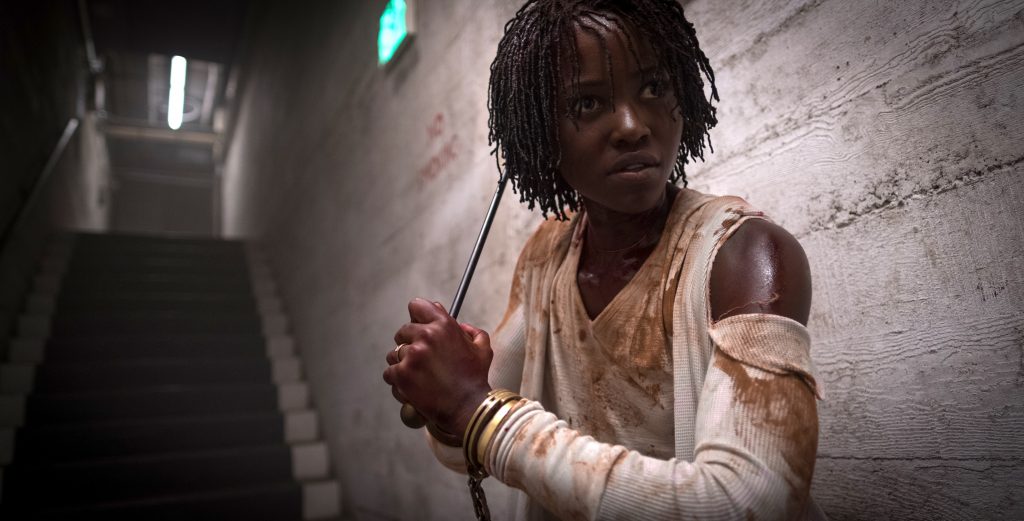 image via Universal Pictures / Us

“I haven’t had to sustain fear, all day, ever, the way I did with this,” says Us actor Lupita Nyong’o. “There’s a level of that kind of fear and determination to survive and adrenalin that you have to work towards, or with, all day. It’s exhausting. It’s absolutely exhausting. And I had to find ways to trick myself into staying in that state. It wasn’t easy.”

In a suite at Soho’s Ham Yard Hotel, Lupita is curled up on the sofa. Dressed in all black she looks striking, although understandably a little jaded by the all-day press junket. Having spent what I imagine is several hours in the same spot, she’s become settled, her feet kicked up, rifling through her handbag for the first few seconds of our chat. However, it’s not long before her trademark charisma and poise surfaces. She leans in as she answers, each sentence thoughtful and beautifully spoken.

The Oscar-winning actor is in London to promote Us – Jordan Peele’s highly anticipated follow-up to Get Out – in which her character Adelaide and husband Gabe (played by Black Panther co-star Winston Duke) head to the Santa Cruz coast with their children for the summer, only to find themselves confronted by their soulless, murderous doppelgangers. It’s exceptionally chilling – and when Adelaide is juxtaposed with her eerie double Red, Lupita’s range becomes even more evident. Reviews of her performance have been rapturous.

It was back in 2013 that Lupita’s became something of an overnight success when, straight out of Yale’s MFA Acting program, she appeared in Steve McQueen’s 12 Years A Slave, stealing the show with a heart-rendering performance as Patsey – and subsequently winning the Academy Award for Best Supporting Actress. Since then, her CV has spanned everything from the Star Wars franchise, where she’s CGI-ed beyond recognition as alien pirate Maz Kanata, to 2016’s Queen of Katwe, playing the mother of a chess prodigy living in the Ugandan slums. Last year, she joined the Marvel universe in the groundbreaking Black Panther blockbuster as Nakia, a whipsmart Wakandan spy and King T’Challa’s refreshingly dark-skinned love interest.

Despite a surge in demand since she swept the board that first awards season, the Kenyan-Mexican actor has so far been fairly selective, opting for one or two film roles a year. And when she details to me the intensive preparation she embarked on to prepare for Us, it’s clear she’s someone who fully commits to the craft. “It took a lot of research – a lot of research – in order to be able to kind of root these two women in very specific backstories [so] that I could embody them.” Adelaide, for example, is an ex-ballet dancer so Lupita took classes to capture that specific subtlety of character. “[Ballerinas] have a different relationship with space… And once a dancer, always a dancer. She’s not a practising dancer at the time we meet her, but she still has the residue of the dancer.”

For Red, prep was equally immersive. “There was a line in the script that said she had not used her voice for a long time and so I wanted to have a very specific kind of raspy voice,” she explains. “I was inspired by… spasmodic dysphonia, which is a condition that is brought about by emotional or physical trauma and it creates this involuntary spasming of the vocal folds.” Her homework clearly paid off: when the latter of the two first opens her mouth on screen, it’s so unexpected that you almost instantly forget it’s the same person.

Us marks Lupita’s first foray into a notoriously tricky genre – although this year, she also makes an appearance in comedy-horror flick Little Monsters, which premiered at Sundance in January. However, rather than the actor actively seeking out more frightening fare to sink her teeth into, it was Peele who approached her with an offer. “[Black Panther co-star] Daniel [Kaluuya] had put me in touch with Jordan… I went and I had lunch with him… and he just said, ‘I might be writing something with you in mind. But I’m not sure. Don’t hold your breath.’”

Get Out was released while Lupita was in production for Black Panther and, like many, she was blown away by the comedian-turned-filmmaker’s genius, going to see the movie five times. “I would’ve stood and acted like a tree for Jordan!” she jokes. Fortunately, when the script landed in her lap a year later, it was so impressive that she was almost immediately on-board. “When I read it, it was a no-brainer. It was just offering such a unique story, challenge, opportunity… It was always gonna be a yes.”

Back in 2017, with Get Out, Peele marked himself out as one-of-a-kind filmmaker and cultural observer, capturing the subtle realities of everyday racism, layering each scene with blink-and-you’ll-miss-it symbolism, and in turn producing one of the smartest films in the history of the genre. With Us however, there’s zero explicit commentary on race per se; on the surface at least, it’s simply an all-American family placed at the forefront of a horror movie who just happen to be black. It’s a rarity. “As much as I have black skin, I’m not thinking about it all the time,” says Lupita. “There’s time when we live a very internal life as people and race and that stuff is an external factor that in socialising is forced to become internal. And here is one of those where it’s unremarkable.”

When describing working alongside the film’s producer, screenwriter and director, Lupita speaks effusively. “Jordan is very fun to work with. He’s very even-keeled, he never loses his temper, he’s very communicative… I mean he should teach a class in communication.” She explains that it was also a highly collaborative process; while Peele would provide precise yet enigmatic notes as a starting point (Red was described by Peele as “queen and cockroach”), she was often invited to chip in. “He wants to hear your idea,” she says. “We’ll have healthy arguments… and he’s very generous with information as well. He doesn’t hide his process – he shares it.” He let the actors “play as wildly as we wanted”.

Even as a relative newcomer in Hollywood, Lupita has rarely shied away from speaking up. The six or so years since she first arrived on the scene have been especially momentous for the industry – and the actor has often found herself right in the middle. Shortly after winning her Oscar, she gave a speech at Essence’s Black Women in Hollywood Luncheon, expressing her desire to be an inspiration to young dark-skinned women. “I hope that my presence on your screens and in the magazines may lead you… on a similar journey,” she said. “That you will feel the validation of your external beauty but also get to the deeper business of being beautiful inside. There is no shade in that beauty.”

Likewise, Black Panther symbolised a breakthrough moment – a film with an almost all-black cast that went on to smash box office records, rack up critical acclaim and subvert out-dated ideas of what “sells” in the process. On the press tour for the film, Lupita spoke about how significant it was seeing her home continent represented in a new light, and praised the movie’s portrayal of black women. “The fact that this particular image has natural hair, and dark skin, and women in positions of power, it’s just a whole lot of things that are really just going to change the way children see themselves,” she told gal-dem last year.

But arguably the most seismic moment in Hollywood of late has been #MeToo, and in October 2017, Lupita joined the movement, revealing in the New York Times that she, like many other actors, had been allegedly harassed by Harvey Weinstein, back when she was a student. “I speak up to make certain that this is not the kind of misconduct that deserves a second chance,” she wrote in the widely read essay.

Amid the calling out of the industry’s abusers and the recent push for greater representation on screen, I’m keen to know how she feels about the future of Hollywood. “I think people are realising that it takes the deliberate efforts of every individual to create the Hollywood we want to see,” she tells me. “I feel very fortunate to live in a time when there are visionaries like [Black Panther director] Ryan Coogler and Jordan Peele who have a foot in the door and are making the most of it and running with it… Obviously, with something like Black Panther, it shattered a lot of myths and so now that’s done, let’s get to work!”

The on-going worldwide tour for Us aside, Lupita is booked and busy. Since 2014, she’s been a spokesperson for Lancôme, her lustrous skin and flawless features reaffirming the beauty of dark-skinned women on billboards, at makeup counters and in glossy magazines. And more recently, she signed a contract with Calvin Klein, appearing in ads for their perfume alongside fellow movie star Saoirse Ronan. She’s also hard at work behind the camera, last year revealing that she’s producing a miniseries based on Chimamanda Ngozi Adichie’s Americanah. And then there’s her children’s book, Sulwe, which tells the story of a dark-skinned girl who comes to embrace her complexion, and is due to be released this year.

As for acting – her first love – she says there’s no specific trajectory in mind, and that her choices are often impulsive. “It’s very hard to have a long-term career plan as an actor. It’s not like banking or something, where the ladder is there and all you have to do is climb it. I’m really just led by my gut and also… my appetite for things. Often times, a role I’ve just played will influence what role I play next because my energy and my creative spirit is depleted… I’m looking for a role that will require something else from me.”

She admits, however, that she would love to work with acclaimed Mexican director Alfonso Cuarón (perhaps an opportunity to employ her fluent Spanish) and is a fan of The Favourite’s Yorgos Lanthimos: “I think he does wild and beautiful things.”

In her ambitions at least, Lupita seems pretty fearless. And in all honesty, what’s to stop her? With such staggering talent (there’s already Oscar buzz around Us) and a quiet, steely confidence, right now she has Hollywood – and the rest of us – in thrall.

Us is in cinemas 22 March