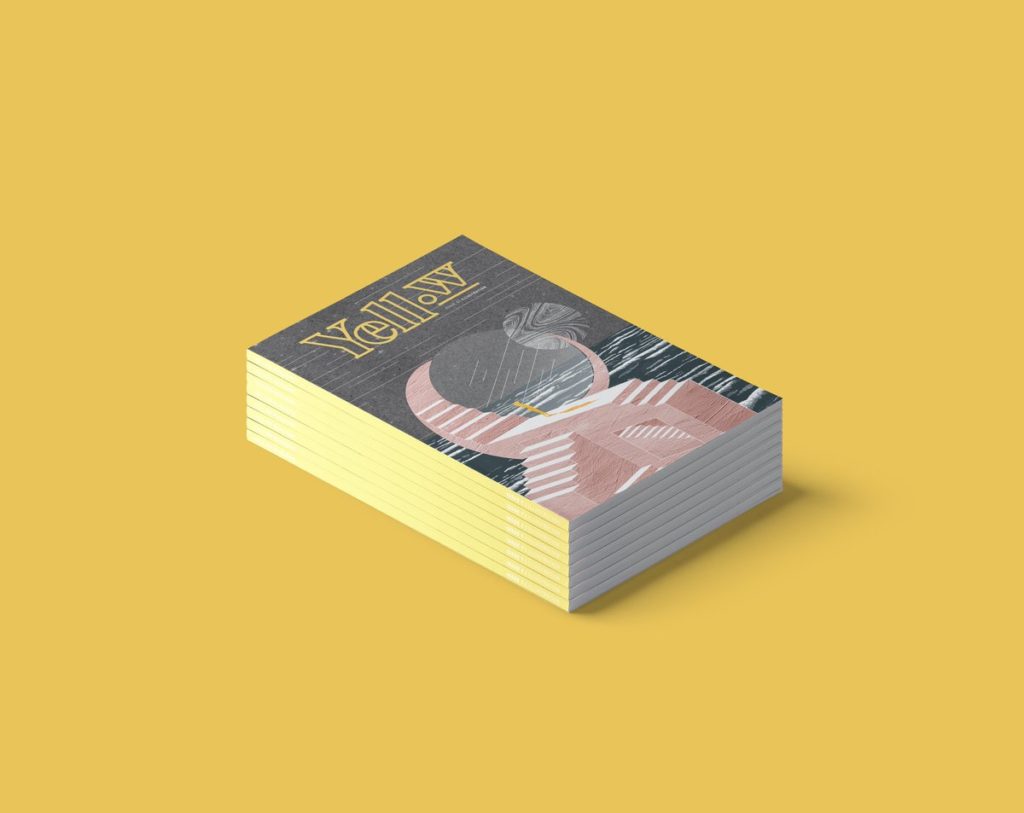 You have our word.

I set up my own publication, Aurelia Magazine, in 2018 because I knew I needed a platform dedicated entirely to first-person stories to exist. As a young woman of colour, I had to ignore my inner voice as it told me “this world isn’t for you”, and persevere anyway.

If the past couple of years as an editor have taught me anything, it’s that I’m far from being the only one to start this journey. The media landscape is undergoing rapid change. While traditional press reckons with new trends and challenges, there is a new generation of incredible digital magazines and zines led by and/or aimed at women/non-binary people of colour in existence, each one an individual force to be reckoned with.

Despite the statistics that show us, in black and white, that journalism is nowhere near as diverse as it ought to be, and the fact we’re in a time when art and the creative scene feel so precarious, there’s cause for celebration. It’s my absolute pleasure to spotlight some of these publications. Here’s to my peers, the women and non-binary people of colour who have carved their own spaces and are changing the landscape by championing regional voices, on-the-rise talent, and who have a focus on strengthening the community.

ROOT-ed (Revolution of Our Time) is a self-published zine and social platform available for purchase both in print and via digital download. It was created by Amber Akaunu and Fauziya Johnson in 2018, who met whilst studying fine art in Liverpool. The pair were the only black students in their class, and were disappointed to learn that there were no teachers or guest lecturers of colour on their course. Experiences at university, such as being followed around by gallery staff or tutors mixing up their names, led to the creation of ROOT-ed. The zine aims to promote, support, represent and inspire creative people of colour within the North West of England.

Fauziya tells me, “We are the demographic we’re representing: people of colour, creative, northern and working class. We’re independent, don’t have regular funding, and we have no-one to answer to, therefore our platform is completely uncensored and offers an opportunity for creatives of colour to speak their minds.” ROOT-ed have succeeded in drawing people’s eyes towards the North; recently having partnered with Creative Debuts on the amazing Black Access Grant, providing monthly financial support to Black artists with no strings attached.

So far, there are 12 issues of ROOT-ed, which is published quarterly. They always aim to lift up and draw attention to causes they’re passionate about; their latest issue was created in collaboration with Homotopia Festival, an LGTBQIA+ arts festival.

Bad Form is a quarterly print and digital literary review that publishes Black, Asian, and racialised community writers. It is a dream come true for any fellow book lovers to peruse, publishing reviews, interviews, essays and features – as well as providing a home for original short stories and poetry. Bad Form was founded in 2019 by Amy Baxter, with the goal of offering a substantial platform to underrepresented writers after it was discovered in 2016 that less than 100 books by British BAME authors were published. Amy explains, “There is a huge representation gap in the British publishing industry, and this needs to be fixed, and publishing houses are only starting to wake up to this issue in the wake of the Black Lives Matter (BLM) protests. We exist so publishers help these books exist.”

Bad Form has many highlights. They sold out an event at the London Review Bookshop and filled it with “performances from Black and brown poets and writers, and young people, and joy”, and the publication is supported by all-round genius, Nikesh Shukla.

Amy self-funds Bad Form; they have never received any external funding or grants. Nevertheless, the response to Bad Form was more than she could have anticipated and it has gained a following of almost 10,000 across their social platforms. There’s a new piece published on the website every day – something Amy is proud of but didn’t expect, proving that there is a real hunger for the platform.

Ashamed is a digital and print publication for people of colour of marginalised genders, and although their strong, instantly recognisable identity may lead you to think otherwise, they launched just last year. The name is closely linked to their content, with so many of their articles directly confronting the feeling of shame, and the writers being on a mission to reclaim it; whether it’s regarding race, sexuality or actions they take in their everyday lives.

Ashamed’s founder, Halima Jibril, speaks resolutely when discussing her creation. “I think spaces like Ashamed are important because media in all forms is oversaturated with whiteness,” she says. “Since the re-emergence of the Black Lives Matter movement, a lot of media publications were scrambling to find black writers to write about their trauma. Sometimes we just want to write about a film that touched us, you know? We have so much to say outside of race, too.” One look at Ashamed proves it’s achieving everything it set out to do.

Ashamed’s print magazine debuted this Black History Month in collaboration with Wessex Scene. Featuring the work of Black creators, it includes articles about the need and necessity for prison abolition, and stories about Black beauty and feminism, pieces about film and whiteness, spaces, places and being enough, Blackfishing and so much more. The money raised from their print issue will be going to Free Black Uni, an organisation that aims to decolonise education.

Annual Leeds-based zine Pennycress is the brainchild of Jenessa Williams, a powerhouse that does it all; the editing, the designing, and the commissioning. In print since 2019, the only other person involved in the making of Pennycress is artist Naureen Hafiz, who provides the cover art. Pennycress contains visual art, poetry, journalism, illustration and photography from a range of different creatives of colour; the only stipulation being that they must live, work or study within the North of England.

Jenessa shares her belief that artists of Black and Asian backgrounds, in particular, can lack confidence when it comes to self-promotion, due to fears about tokenism, their work being misunderstood, or just generally not feeling as if they are up to par with their white counterparts. It’s also acknowledged that in general, so much of our media is London-centric. As a result, Pennycress is dismantling the status quo.

As for its sole existence as a print zine, she says, “There’s nothing quite like holding a proper compilation of people’s work in your hands”. Pennycress is never for profit, with Jenessa opting not to take a wage, but always making sure that contributors are paid and any money raised goes straight back into charitable projects and funding the printing of the next issue.

Sweet-thang is an arts and literary print zine that publishes Black womxn and non-binary Black folks. Sweet-thang exists solely in the hands of Zoe Thompson, who is also an undergraduate in Sussex.

It’s bright, it’s bold, and it’s full of love. “This zine will provide you with beautiful poetry, thought-provoking essays and amazing visuals surrounding any theme, and will generally just be a sweet lil’ publication for all to enjoy”, their website reads.

Sweet-thang is a creative safe space for themes like resistance, liberation, healing, and free expression to be explored. Zoe says that she always had an interest in zines and art collectives, having started a blog in her early teens and connecting with like-minded young creatives as a result. However, Zoe recounts, “I just wanted a space for black girls to be messy and creative and spontaneous.”

Sweet-thang’s steady support over the years is a testament to how helpful their space is and how important. Their latest issue, On Healing, is available via their website. You can also download issue four, The Love Issue, for free.

Created by siblings Aisha and Oreoluwa Ayoade, Yellowzine is an innovative space for African, Caribbean and Asian creatives visual artists based in the UK to express themselves artistically, and boundlessly. Their first print magazine was published in 2018, and they’re already on their third issue, with talented people coming to them in droves, wanting to be part of their creation. Yellowzine has gone global – stocked on shelves in London, Manchester, Portugal and New York.

Co-founder Aisha created Yellowzine because she felt as though her community wasn’t being valued unless they told a specific kind of story. “We’re part of the new art renaissance, a movement that unapologetically celebrates work by underrepresented artists,” she adds. Everyone has a fair shot; with Yellowzine publishing both established artists and those who are still honing their skills.

It’s constantly evolving, with their current enterprise split into four divisions: a print magazine, an online submissions-based platform, live events and an annual eight-week creative mentorship scheme. Each one connects artists and creatives to clients and collaborators, whilst providing them with the tools and guidance for a career in the industry.

Korantema Anyimadu is a cultural producer, a community manager at social justice charity Arts Emergency, and the brains behind Black Hair Stories, a project that ultimately led to print publication, The Salon Zine.

Following Korantema’s MA dissertation on hair, heritage and Black women in Britain, she launched an oral history project and curated a visual exhibition, “Plaits, Princesses + Pink Moisturiser”, in London. The exhibition featured Black women and non-binary folks of all ages talking about hair and nostalgia. Guests were invited to tell their stories and have their portraits taken by Nana Ama Owusu-Ansah. Many impressive faces were there – Dawn Butler MP and bestselling author Otegha Uwagba to name only a couple. The exhibition won an award from the Mayor of London and was featured in the Migration Museum.

The Salon Zine developed naturally in 2019 after the success of the Black Hair Stories exhibition and project. Today, the two co-exist as means to explore the unique experiences of Black womxn, told in their own words. “The zine is a collection of personal stories, photography from my exhibition, illustrations, essays and poetry. Overall, I want to create a community on the page as well as off the page,” says Korantema.

Onbeat is a collective for women and non-binary people of colour, platforming underrepresented voices via their print magazine, radio and events.

Beginning as a society at Leeds University, the collective also has a presence in London, as the main team at the time of its 2018 launch, Tanya Arackal, Ayesha Chaudhry and Alisha Shah, have graduated. However, co-founder Tanya is keen to emphasise that Onbeat’s home always lies in the north.

So far, Onbeat has published two magazines; one on the theme of “space”, how WoC and NBPoC can take it up in white-dominated environments, and secondly, “tribute”, an ode to ancestral legacy – exploring the diaspora that came before and paved the way for so many second-generation immigrants.

In London, Onbeat has been running life drawing events celebrating bodies of colour at Prince of Peckham, a black-owned pub. They’re always finding ways to ensure the community is supported. “All we were looking for was a community to feel accepted,” Tanya says. “Our events and magazine launch parties have always felt so healing and nourishing. It’s great to be around people you don’t have to explain yourself to.”