Mahalia’s not compromising her self-awareness 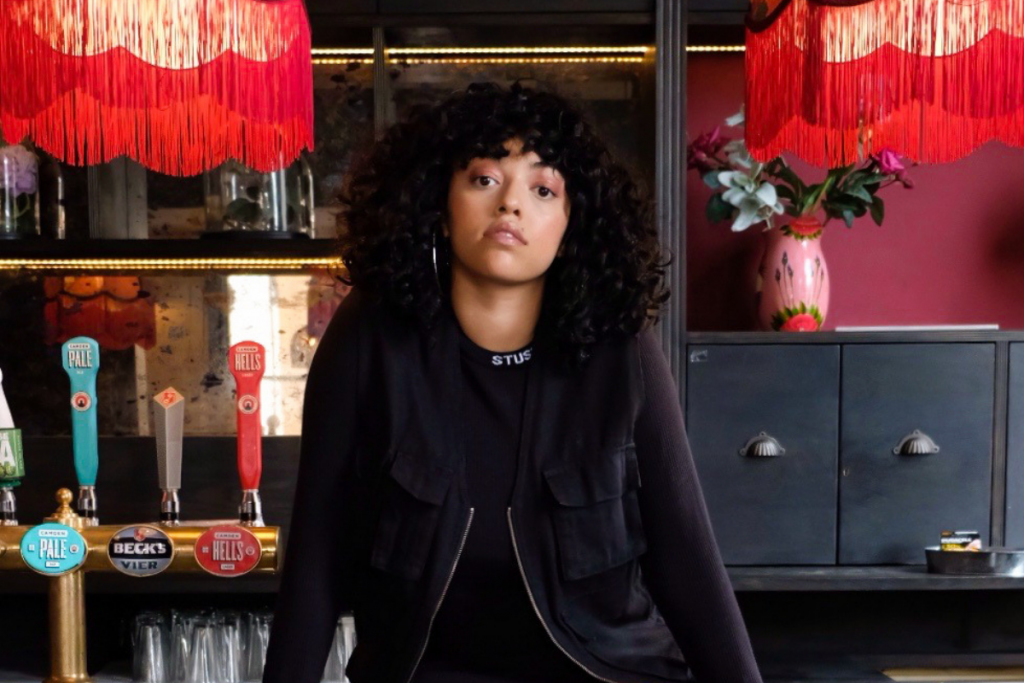 Walking into a Bethnal Green pub mid-afternoon and seeing Mahalia Burkmar swinging from the bar with a smile on her face, you would be inclined to think she worked there. Relaxed yet animated, Mahalia is in fact posing for our shoot. She’s a natural in front of the camera, seamlessly adjusting and posing and smiling without a second thought.

Although the flowers next to her may be fake, it’s plain as day that the twenty-one-year-old artist, through her music and image, is very much intent on keeping it real. The Leicester native has been releasing music since 2015, but now Love and Compromise, her long-awaited debut album is here.

“Your debut album is your most important self-definition,” she tells me, as we move to a booth in the corner, “you’re telling the world what you’re offering as an artist and as an individual.” After 18 months of writing and recording the record while on tour, Mahalia is ready to present herself to the world. Love and Compromise is ultimately a commentary on relationships: relationships with others, yes; but, most importantly, relationships with self. “Through all of my relationships, I learn more and more about my inner being,” she says, “I feel like I delve deeper into myself with every relationship I get into. Whether that be with friends, family or partners. The relationship I build with myself is the most important one in my life right now.”

Already known for her introspective take on relationships today with her 2017 breakout single ‘Sober’ as well as this year’s ‘Do Not Disturb’, Mahalia says it was a thirty-year-old clip of an interview with the legendary Eartha Kitt that inspired the title and everything to do with the album. When asked whether she would compromise for  man that came into her life, Eartha bursts into shocked laughter, “Compromise? For what?” During the rest of the clip, she explains that there can be no compromise in love. “My mum showed me that interview when I was about eleven,” Mahalia says now, earnestly, “and from then I always knew that it would be the title of my debut album.” Before the now infamous clip circulated on social media, these firm words were imprinted in the mind of a young Mahalia. Eartha’s message with its emphasis on the fundamental importance of self-love and self-awareness is clear as day in Mahalia’s work, musical or otherwise.

“Authenticity is important,” Mahalia says – and nothing is more authentic than heartbreak. The album details three different relationships in her life, but tells the story of the life-cycle of modern day relationships. Starting with ‘Good Company’ (“an important song that empowers women to navigate relationships on their own terms”), through to the Cam’ron-sampling, Ella Mai-featuring ‘What You Did’ which details what Mahalia considers “the biggest betrayal of all”; until we –the listeners, Mahalia and partner – are finally back to ‘Square 1’.

Mahalia forms an important part of the UK’s resurging R&B and soul scene, dominated by women such as NAO, Ella Mai, Ray BLK and Etta Bond. The landscape has previously been unreceptive, and we get talking about how Ella Mai found fame abroad in the US before being appreciated on home soil. “I still think the UK could do so much more to recognise the R&B artists on the come-up,” Mahalia says, “I think things have changed massively with the wave of incredible R&B acts coming through right now… but, I think it could be getting more love on mainstream radio.”

Mahalia’s album, at least, is definitely inspired by radio from a different era. The music played at home by Mahalia’s parents while she was growing up in the early noughties is authentically reflected in her album. Throughout the thirteen-track project, she ventures from her usual “psycho-acoustic soul”, flitting between R&B, dancehall and Afrobeats – it’s a daring and conscious recognition of her influences and aspirations. The assertive ‘He’s Mine’ harks back to the iconic collaboration of R&B legends Brandy and Monica, while Burna Boy-assisted smash hit ‘Simmer’, which samples the iconic Playground Riddim best known from Beenie Man’s legendary ‘Who Am I’, reminds her of “the dancehall music segment in the club” and “growing up at home with my mum, just singing”.

That kind of nostalgia can be a comfort – one that’s necessary in the face of more draining things. Take social media, which, for all its uses, Mahalia is all too aware of as a tool to objectify, degrade and critique. She recognises her position as a young user of social media herself, who is also a known public figure, and she has made it a priority to promote the importance of self-love and body positivity. Mahalia says her message is one of “ambition and empowerment for young girls,” in an age where appearance and public image are increasingly tied to success, not least for a black woman trying to make it in the music industry.

“I tried to slide into Burna’s DMs to work together, but he just didn’t respond”

This can undoubtedly take its toll on the artist, who has also felt the pressures of being a signed artist since she was thirteen. However, her current major label backing has come with its perks, she laughs: “I tried to slide into Burna’s DMs to work together but he just didn’t respond – which I totally understand as he must get so many. But, eventually, I was able to reach out via management – I am really grateful for the help I get from being signed to a major label.”

Whether it’s being mindful of the perks that come with being signed or channelling Eartha Kitt, it’s clear that Mahalia is staying grounded. No track on the album embodies the importance of self-awareness more than ‘Regular People’, an “ode to the kind and the peaceful” featuring up-and-coming Londoner Hamzaa – who Mahalia calls her sister – and New Orleans native Lucky Daye. Harking back to a fleeting moment on the steps of a tour bus after another show in another city, Mahalia recalls a young girl approaching the open door to ask, “are you famous?” – to which she replied, “not yet”. But now Love and Compromise is here sweeping us off our feet, and it feels like Mahalia won’t be one of the ‘Regular People’ for much longer.

Love and Compromise is out now, stream it here.