At 25, Tianah juggles her day job with her side hustle but her motivation to carve a space for hearing impaired people in fashion keeps her going. 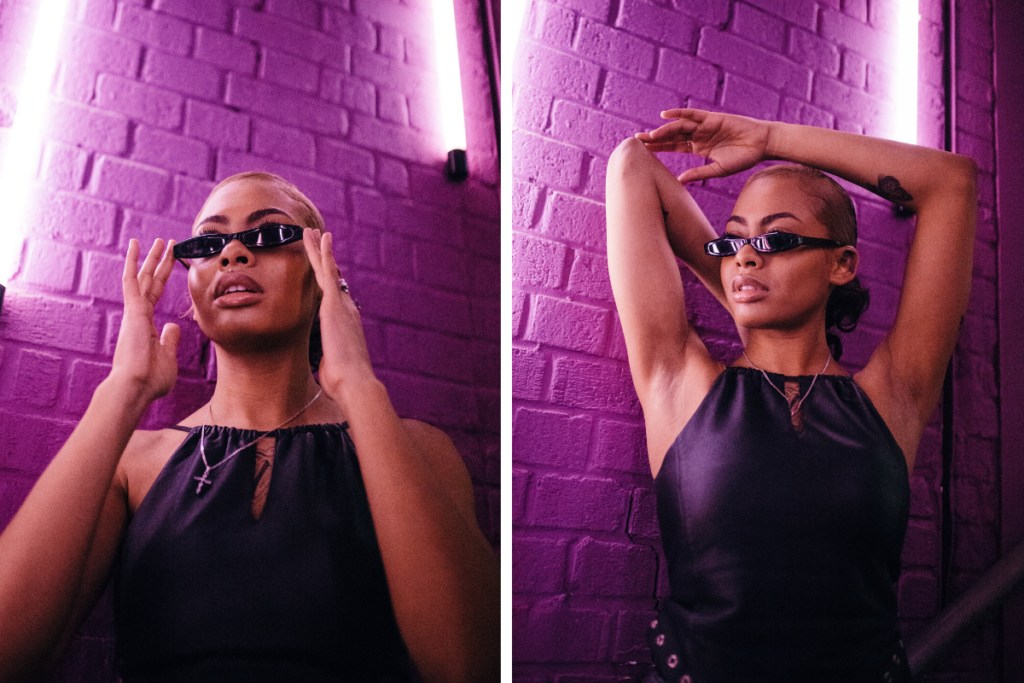 Last week London’s cold pavements were graced with the pitter-patter of A-list heels for various fashion week festivities. Each London Fashion Week (LFW) means the world’s eyes are fixed on the city’s burgeoning talent. One of those rising stars was Christianah Jones (Tianah for short). During LFW, her cult sunglasses brand, CHRISTIANAHJONES, launched a new (but nostalgic) Matrix-inspired collection.

When we meet at the Depop offices in Shoreditch, the 25-year-old reveals that despite running a successful e-commerce brand, she also heads up social media at the shopping app’s HQ in the daytime. “I get why sometimes people are concerned about whether I have time for both jobs. But, I finish Depop at 6pm and I get home around quarter to. Once I’ve had an hour for my mealtime then I can basically spend like five, six hours in the evening on the business,” she explains nonchalantly, before laughing. “My social life is very, very, very limited.”

Tiana’s laid back attitude is immediately apparent, her bare face is framed by a large black hoodie, which she adjusts to cover her cornrows. It’s draped over a long black skirt and black pumps. She says her office days are her “ugly days” although she still looks chicer than most. With so many things to fit in the day, she’s used to traversing different spaces, speaking to mostly American clients at night, blending into corporate spaces when talking to potential investors after her day job is finished, or even meeting up with a mentor in her free time to keep her on the straight and narrow. Spinning all of these plates it’s no wonder that Tianah struggles to fit fraternizing with her peers into her timetable. But there are a variety of elements that means that often, she’d rather be alone.

“I’m a very solo person. I wouldn’t say I’m antisocial but I don’t spend a lot of time in social settings. Mainly because for me when I pay too much attention to someone maybe even 20 minutes – I’m gone,” she explains. This is compounded by the fact that at two years old, she was diagnosed with high-frequency hearing loss. “Lip reading and paying attention to four, five people after an hour makes me tired. Especially if there’s alcohol involved! It’s so much energy so I just go home, it’s unproductive for me.”

Tianah’s hearing loss is something that she admits has been a source of frustration both because of the lack of accessibility in certain spaces and because she’s so fiercely independent. She needed help in lectures at university, and when she went to work she found it hard to lip read her bosses in meetings. “I had to work so hard just to do the job without even getting to the point where I was exceeding. Even when taking lots of phone calls strained my ear, I got an ear infection and couldn’t hear at all for two weeks. I lost myself. I felt like I always had to rely on people.”

As a part of her personal emancipation, she’s always found ways to declare independence. Leaving home was one, she found a property guardianship near Old Street that used to be a school – her quarters are the old staff room and with £300-a-month rent it was a steal. But another, her favourite, was through solo travel which is what led her to get into the business of fashion. “I’d go to remote places in Japan and stay with some aunty’s home and in return, I’d help her with like gardening,” she says. “They would have a lot of flea markets, people selling crap from their houses and maybe one in 10 you’d stumble across something amazing like vintage Chanel glasses or other frames that were really unique.”

“There’s a lot of things that will try to push you down but a deaf girl can do this fashion thing. A black girl can do it”

She’d gather her findings and sell them online. At first, she used eBay but eventually, she became well-acquainted with Depop. While Tianah’s travels gifted her with the stock and skills (“I used to visit a woman’s factory in Indonesia and they would let you sit with them while they taught you how to put together pieces of clothing”), it’s having her finger on the cultural pulse that has seen the business grow. Her Jollof Rice clothing collection that included a very popular fleece was a hit but had originally just been a fun one-off item she had made for herself.

The business started to take off. “My first breakthrough was Afropunk 2017. We started selling sunglasses there. It gave me the confidence to just go for it, build a website and use Instagram,” she says. Her first pinch-me moment came at Paris Fashion Week in 2018 when Kaia Gerber said she loved the glasses. “At the time I had my very first collection, she selected a pair and was later seen wearing them. Paparazzi were taking pictures of her then articles were talking about the glasses. It was surreal.” But in her words, every good moment comes with a bad one. “The exposure gave way to copycats, we had crazy moments with Ebay and Alibaba.”

Nevertheless, that didn’t stop her from amassing a new crop of celebrity fans, including Ciara, Bella Hadid, Lizzo and Beyoncé. “When I found out Beyoncé wore them I was actually watching the England football match and they lost. We were feeling sorry for ourselves. Just after the match, I was at this bar and I got a notification on my phone and I just started screaming,” she says. “It’s nerve-racking because we’re not really expensive and I’m sure it was next to some diamond shades or something.”

She’s had to learn fast, having made quite a few mistakes in the beginning. Her biggest regret is being able to look back at moments that could have been pivotal for the brand, like when Kylie Jenner wanted to include her sunglasses in a shoot. “I was quite dismissive, I was like you’ve got to pay for it”. Just remembering this missed opportunity makes her animated before she calms down and shrugs. “People think this is a bigger team but I’m a one-man band.” She’d also been approached by brands like Opening Ceremony and Barney’s before their closure who were keen to stock her products. “This was at the time I didn’t even have a proper packaging when they placed an order,” she says, before adding “RIP”. Going into the next phase of her brand she’s paid close attention to the business of fashion as well as releasing new lines.

Her latest collection invokes the 1999 film Matrix, where Keanu Reeves (who is still just as hot) plays Neo, a character who senses there is something wrong with his world which is hinted at by the fact he repeatedly experiences deja vu. “I’m a 90’s babe. Y2k was an era when we thought the world would end,” she laughs. It’s not too dissimilar to our current neo-apocalyptic mood so it’s the perfect time for a reboot of the aesthetic. “No one makes movies like they used to, no one does style like they used to – so I wanted to relive it.”

Eventually, it is revealed people are being suppressed in a simulation that keeps them docile and obedient. I asked if she sees herself as a Neo trying to shake up an industry that purports to be experimental but is still extremely closed off. “I’m fighting to find my place. There’s a lot of walls that close in on you, there’s a lot of things that will try to push you down but a deaf girl can do this fashion thing. A black girl can do it. It’s not all about connections and networks and relying on cliques its about self-identity and standing on your own.”