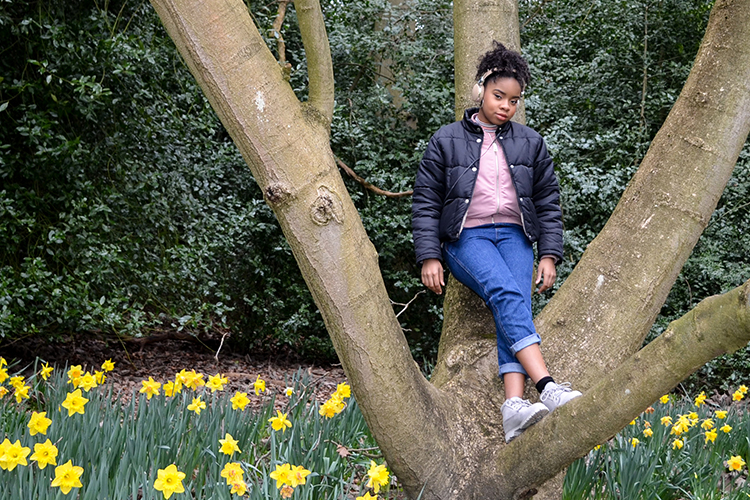 Honing in a strong presence around perimeter of the music industry, Melle Brown (amongst other things) is one half of Brown X Blue on youth-led Reprezent Radio with co-host Blue Canariñho.

Today, Melle Brown debuts herself as a producer with the release of Blossom. Brown’s EP is a culmination of the creative flow she developed and nurtured over the last seven years during her time at The Brit School and London College of Music.

“I’ve always been more interested in the technical side of things”, Melle explains “I grew on a routine of various music lessons from an early age, but my real passion has always been production – taking the spark of inspiration and developing it into a final track”.

With undeniable musical influences which take form in the likes of Kaytranada, Snarky Puppy, Disclosure and Robert Glasper Melle Brown is driving forward a new and exciting sound which brings plenty of promise for a debut. Brown caught up with gal-dem over e-mail just ahead of the release.

gal-dem: What made you decide to take the leap from being behind the scenes to coming to the forefront?

Melle Brown: I have been making music behind the scenes for a while now and it just feels like the right time to share it with everyone. I’ve developed my sound naturally over the years and this relates largely back to the EP title Blossom, as it is just the beginning. Blossom is an expression of me… my loves, my fears, inspirations, and the journey I’ve been on in the past few years which got me to where I am now. Timing is everything, and I feel now is the right time for me.

How do you want your music to make people listening feel?

I’d like people to feel refreshed and uplifted when listening to my music.  I’ve tapped into a few of my favourite genres throughout this project and I feel it has a crossover appeal; where it can be played at maximum volume in a club and make you move, but you can also add it to your chill out or on-the-go playlist!

I’ve put a lot of thought into melodies, chords and textures in each track; I’d love it to be the go-to EP when people want a balance between reflective, easy listening and turn up mode.

How did the collaborations on the EP come about?

Everyone who features on the EP has been a part of my journey in the lead up to Blossom in some way.

They are all so talented, and this EP means more than me just sharing the music I’ve been working on; it was also to shine a light on other artists and musicians, who are also my friends, who people may not have heard before… that means more to me than I can express.

‘So Into You’ I produced the beat whilst I was studying music production in Brighton and had been looking for the right voice for ages…then I heard Danni Wells at a gig – and in that moment, everything just clicked!

We co-wrote the track a while ago, but it stayed alive on paper and old in voice notes for some time as I moved back to London. With Danni in Brighton it was just a question of her recording and tweaking what we already had to finish it! I love working with Danni, we plan to do a joint project soon!

‘Need More’ was born in the studio with Shaun Lewis, JayMusique and Samuel Elliot – these guys are seriously talented musicians! It features vocals from Yolanta Rosetta – who I met at the Ultimate Seminar a little while back. We always wanted to collaborate and now was the perfect time, her voice sits great over the jazz inspired beat.

‘With You’ features the sultry voice of Kàris and MC Mr. Benjamin. I got these two in the studio with me and the session was so much fun! They vibed off of each other’s energy and together we created this feel-good track which is definitely one of my favourites on the EP.

I met Casskidd at The Brit School and our paths crossed again through Reprezent Radio. If you ever need a remix… CassKidd is the guy to go to! His remixes and productions are so sick and he flips tracks in a way that you never would have imagined. I also must give a special shout out to Speech who mixed and mastered the whole EP, he really is a genius.

I hope people enjoy this EP as much as I’ve enjoyed producing it.

Tune in to Brown x Blue which airs Wednesdays 10am-12pm (GMT) on Reprezent.