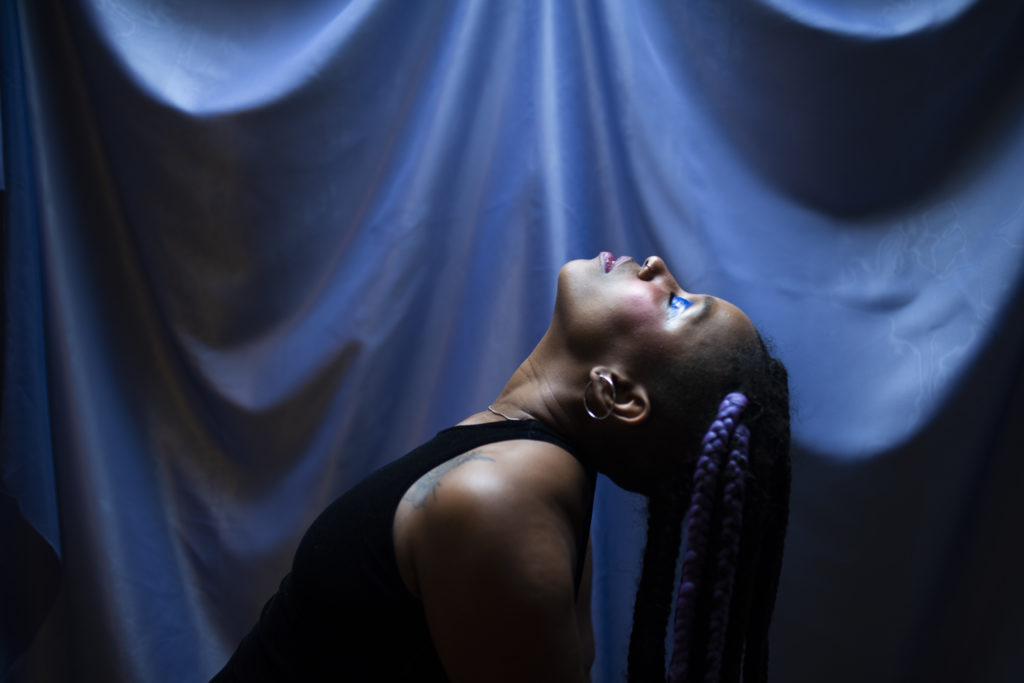 If you’re a professional musician, the day after your album is released might be a temporary reprieve – from touring, coming up with new material, working with a huge crew of people to generate a live show. Not so for producer, singer and visual artist E.Jane. The day after they put out their LP Fantasii (released under their alter-ego MHYSA) back in 2017, they found themselves sitting in their room in West Philadelphia, wondering what they could say next.

“Trump had been elected that year, and Brexit had happened that year too, and I just started thinking, like, is this the end? I was having this really comical, really intense time, and a lot of the music starts from there,” they say. “It was about asking, what do I want and what do black women want?”

When they started touring for Fantasii in January 2018, they didn’t really stop until July of 2019. Between shows, they jotted down lyrics on scraps of paper and notebooks in between shows, singing voice notes in airports. “It was a long period of just going, going, going, and there was always a show, and I was always on a plane, and I would often write to take my mind off like, a terrifying plane crash,” they add. “But it becomes more about a game that you’re playing with yourself, and you’re more worried about the shapes fitting into each other than the fact that you’re like thousands of feet above the air.” When they were travelling less often – or at least, when they seemed to have something resembling a break – they would de-stress in their home in West Philadelphia, slowly letting their new project, NEVAEH, take shape.

Fantasii was a queer, breathy bedroom R&B album, oscillating between the uncanny and the carnal – thoroughly personal, much of the music was derived from taken MHYSA’s own experiences. Like Fantasii, NEVAEH comes from a place of exploration – MHYSA wanted to make something that reflected their own experiences of pleasure, experimentation and pain; a record which didn’t necessarily have to fit neat boxes.

Alongside projects as MHYSA, E.Jane also works as a visual artist – previous exhibitions include projections of black women singers like Brandy, plus tapestries and sculptures. They are also one half of production duo SCRAAATCH, alongside producer lawd knows. NEVAEH is MHYSA’s first album on Hyperdub, an unconventional, sensual album that weaves its way between skits, breathy acapella tracks and the occasional club banger. ‘Sanaa Lathan’, the closest thing to a conventional song on NEVAEH, features a sinister trap beat with MHYSA rapping over it, and has already found its way into labelmate Kode9’s club sets.

“Gospel is kind of all about hope and change, and the belief that things can get better. R&B is kind of the profane side of that coin. One’s commercial, and one’s for Jesus”

“I love working on production at home, even if it’s like rolling out of bed and going at it, and you can be really vulnerable,” says E.Jane. “No one’s around to make me feel nervous and I can try as much as I want and fail and try again.” They were intent on home production – using the tools and material that was available to them, rather than trying to scale up. “There’s definitely a kind of arms race, like whose music can sound the most like a Michael Bay soundtrack or something like that,” they say. “When people wrote about Fantasii, they often said it was cutting edge. But that’s the tradition with underground music – it’s often called avant-garde and people are just working within their means.” A friend lent them a MIDI keyboard, and they still had a MOOG synth set (a kind of electronic keyboard with a huge range) from when they had played at MOOGfest in 2018, and they asked friends and collaborators for advice. They wanted to push themselves, but they wanted to continue making music in the way that they had been taught.

“My grandfather was a self-taught musician who grew up in Virginia, and he played in gospel bands with churches in the south,” they say. “My mom was self-taught too, and then I would just learn because we had a keyboard around, and my mom encouraged me to sing.” Music became what MHYSA calls a “boundary object”, a way for them to connect with their family. They also grew up in the church, playing music and singing in choirs from a young age, and gospel music holds a transformative hope that they believe they don’t find in many other places.

“Gospel is kind of all about hope and change and the belief that things can get better. R&B is kind of the profane side of that coin. One’s commercial, and one’s for Jesus,” they say. “There’s a quintessential kind of R&B album, which has a gospel track on it, and I grew up singing in church choirs. A lot of black singers come from that church background, and that’s the first music you hear when people are being really emotional – when they’re being really vulnerable at church, and you kind of get the sense that music is actually very powerful.”

On NEVAEH, MHYSA’s voice is the main instrument, alternating between breathy, whispering skits and renditions of gospel music. R&B influences are evident too, even in unexpected ways  – ‘Before the World Ends’ is a crooning love song about the apocalypse, featuring a catchy beat overlaid on top of freaky, glitchy sounds. But if you stripped it back to the basic melody, it wouldn’t be out of place on the soundtrack to a film set in the 90s. Another track, ‘When the Saints Go Marching In’, is an eerie cover of the traditional gospel song, something which MHYSA explicitly draws on in this record. “I grew up listening to a lot of music with a capella, where the voice is driving the song, with the production actually catering to the vocals – you know, a lot of R&B in the 90s was like that,” they say.

“Alice Walker talked about black women’s labour as being knocked down our throats, even their labours of love. Sometimes it still feels like that. On stage, I’m flying, it’s transcendent, and then I get off stage, and I’m back in my non-spiritual realm. It’s hard”

Making intensely personal music  – consistently drawing from your own experiences, producing and creating a record in your house – is hard work, and for E.Jane, it was interspersed with a hectic touring schedule. The dichotomy between the two was difficult to deal with at times. “It’s very intimate work,” they say. “Alice Walker talked about black women’s labour as being knocked down our throats, even their labours of love. Sometimes it still feels like that. On stage, I’m flying, it’s transcendent, and then I get off stage, and I’m back in my non-spiritual realm. It’s hard.”

In the years since Fantasii, E.Jane continued to work on their other projects. They moved to New York, partially for a residency at Harlem’s Studio Museum, and started to see their friends in the city more often. “When I came off tour last year, I bought myself a three-month yoga pass, I started reading, I love a face mask, I eat healthy,” they say. “It keeps the depression at bay.”

Much of E.Jane’s work as an artist explores similar themes to their musical output – around gender, being a black femme, around pleasure and sexuality and self-expression. The music, the art and the production feed into each other, part of a process that E.Jane calls gesamtkunstwerk, or ‘total art’. “Sometimes people will ask you to come and do things, and they’ll say, ‘oh we want you to just talk about art’, ‘oh we want you to just talk about music’ like these things have their own universes. But the work does kind of all communicate with each other,” they say. “I could try and keep those siloes up, but that would definitely be way less interesting.”

“I’m just fighting for autonomy and control that black women are not given over their self-image, or their production,” they add. For MHYSA, NEVAEH has very much been a labour of love – drawing from their own personal experiences, using their voice and challenging their musical sensibilities in a way that they haven’t before. But it was also about catharsis through self-expression, reflected down to the title of the LP. “As a black femme, my feelings are not always readily accepted,” they say. “It’s about taking those feelings, those thoughts too – and finding a place where you can put them. That’s where I got the name from – heaven, backwards.”

NEVAEH is out now on Hyperdub – listen on Bandcamp.