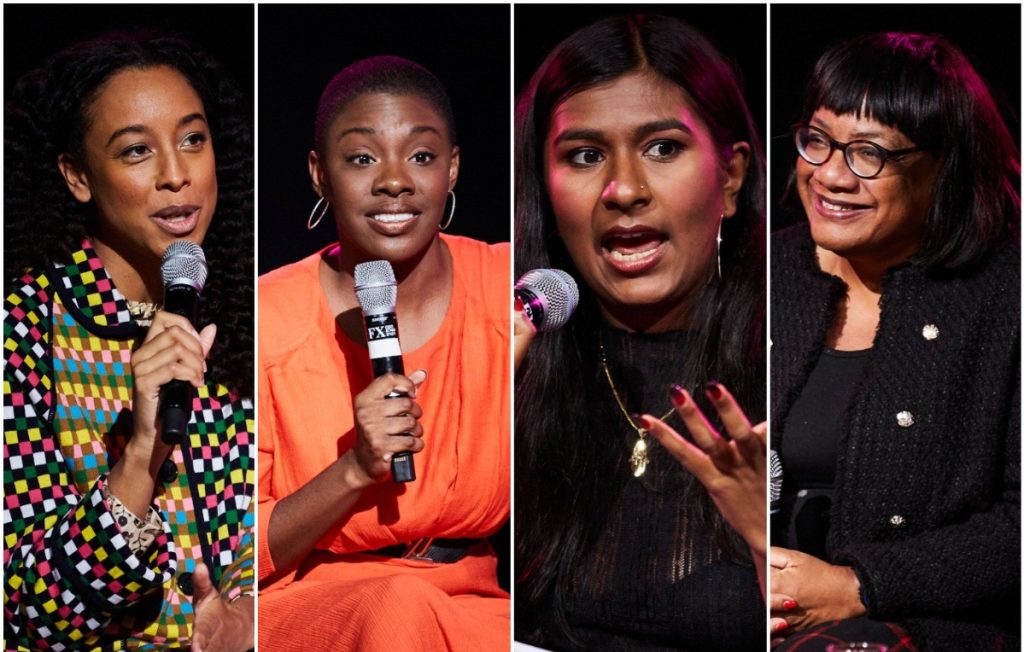 Last week inside EartH, Hackney, around 650 people gathered to hear the inspirational words of women who broke new ground in their respective fields for Trailblazers: Women Leading the Way, an event organised by gal-dem and Intelligence Squared. Hosted by Ash Sarkar, we heard from Bernadine Evaristo the night after her historic Booker Prize win, BBC presenter Mishal Husain, Yomi Adegoke who co-authored Slay in Your Lane, Leeds songstress Corinne Bailey Rae, and Diane Abbott, the UK’s first black woman MP.

The night was a positive and affirming space where these women, who have all felt the need to defend their right to be in their chosen fields, could share their knowledge and passion without needless contention. Among the many anecdotes of fear, defeat, and eventually success, the informal chat was punctuated with jokes – mostly thanks to firebrand Ash’s unrivalled wit.

Here are the biggest takeaways for a bit of Monday motivation.

Diane spoke of being born to two working class Jamaican parents who left school at 14 to then starting at Cambridge University unaware of the culture and gravitas it had in the UK. “I looked around at all those posh white girls, and I thought, what the fuck have you done Diane? And that’s probably the theme of my life,” she said. While the crowd burst into laughter, the takeaway is that you’ll eventually learn to move through your discomfort, take on more challenges, and confidently break down more barriers. “When you’re young and you surmount a hurdle like that for the rest of your life when you see a hurdle, you take it. I do believe people need to go for it.”

Bernadine believes that she won the prize mostly due to the headspace she was in during the creative process. While she wrote Girl, Woman, Other, she told herself this book was sure to be incredible and when Booker announced the nominees she secretly remained hopeful. She explained: “You just have to set that goal. Everybody said ‘you’re not going to win it you know’. They were projecting their own limitations of themselves. But to one or two people I’d say: ‘you know that’s my fucking prize’”. To be fair it seems to have worked.

Try not to fear failure

Yomi Adegoke says that even if her career looks seamless, she didn’t “sprout out of the ground from nothing” and searches through her emails to look at all the rejections she received before Slay in Your Lane hit the stores.

Corinne Bailey Rae went from playing guitar in a riot grrrl band (called Helen) to trying to sell herself as a solo artist to a music industry with a very restrictive view of what blackness was. “I remember journalists being distrustful that I couldn’t be truly be a black working class person because I had a song about Choux pastry and I knew what Choux pastry was”. But by writing and producing her own songs she was able to maintain a strong sense of self and keep being a “weirdo”.

Mishal Husain said her early morning interviews with politicians would go a lot worse if she starts to doubt herself. She said: “If I allow myself to get in a cycle of thinking I’m not good enough and overthink because that could be terminal.”

Our next event in the Trailblazers series is Letters to My Younger Self, and you can pick up tickets here