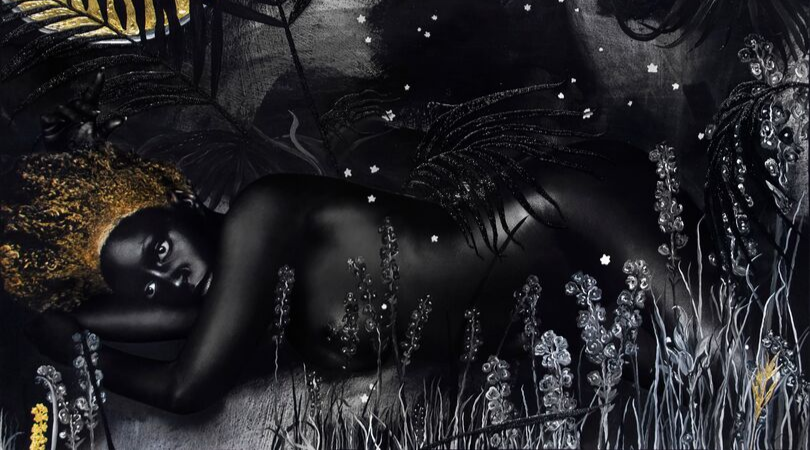 We are officially right in the middle of autumn, and in the UK that means yet another Black History Month is about to commence. School information boards will fill with interesting facts, galleries will host an array of related talks and workshops, and relevant books will be released and discussed.

Black History Month is a period designed to inspire the community while also reminding and confront racial discrimination in the present and past. While we wish we could attend all the country has to offer during this time, (thankfully) there are more events than time will allow. So, we’ve narrowed down the options to a few of our favourites, which includes ballet, film, art and more from London, Manchester, Sheffield and Bradford.

Some Are Born To Endless Night – Dark Matter is the biggest exhibition by east London gallery Autograph to date and deservedly so. Contemporary artist Lina Iris Viktor uses a palette of black and white with ultramarine blue and 24-karat gold. Her richly gilded paintings (pictured above) encapsulate varied ideas of blackness while incorporating the cultural history of the black diaspora worldwide. And, if you would like someone to go with, Black Girl Meetup will be attending as a group later in the month.

Sheffield: In Conversation with Zadie Smith

Multi-award-winning author Zadie Smith will be talking about her new short story collection Grand Union live for the podcast Literary Friction. The book includes new and unpublished stories. Expect some much-loved New Yorker pieces in there. Literary Friction is a podcast on books and ideas by literary agent Carrie Plitt and writer and academic Octavia Bright. If you’re not in Sheffield, this will be worth travelling for.

The Orange Soda Film Club presents some of the most influential horror films in history, focusing on those that have importance in pop culture today. It will be showing a new black horror film every Sunday which includes Jordan Peele’s Get Out and the 1992 film Candyman. Jordan Peele announced last year that he will be creating a “spiritual sequel” to Candyman in 2020.

The play trade focuses on the lives of three women of varied ages, backgrounds and beliefs. The main thread tying them together is their connection to the Caribbean: Lorna Brown is a local woman who plaits tourists’ hair, Tanya Moodie is an older British woman who visits the country annually with a local man she funds, and Nadine Marshall is on her first trip to there looking for a good time. The play, which displays the three women’s everchanging relationships with themselves and each other, brings to life the complexity of transactional relationships. trade was originally performed at the Royal Shakespeare Company in 2005 but has found its way to Nottingham.

The Southwark LGBT Network will be hosting black history month film screening of lesbian film Rafiki, a love story set in Nairobi, a country that still criminalises homosexuality. Back in 2018, Rafiki was the first Kenyan film to be selected for the Cannes Film Festival and was initially banned from being screened in Kenya.

Cheryl Dunye’s debut The Watermelon Woman (1996) follows a fictionalised version of herself as she endeavours on making a documentary about gay black 1930s actress Faye Richards (known as Watermelon Woman). In the budget movie, the character Cheryl learns about black women’s history in film, the gay community and her home, Philadelphia.

Black Girl Fest is the first arts and culture festival in the UK made to celebrate black women and girls. The theme for its third year is “taking up space”. Expect talks, workshops, film, a marketplace, food market, live performances and more.

Masilo’s Giselle fuses contemporary and traditional Tswana dance with ballet. A reinvention of Swan Lake, the performance tells the story of a young girl who, after being suffocated by her own heartbreak, returns from the dead for revenge. The show’s score combines classical strings with African percussions and voice.

Ballet Black has been slowly taking over the country over the past 18 years. The dance company’s name is now unforgettable since its dancers took the world’s breath away with their performance at Glastonbury this year alongside Stomzy. Attendees of their Triple Bill in Nottingham will be graced with three performances: Ingoma, a fusion of ballet, African dance and singing; Pendulum, an intimate duet; and CLICK! A retro, light-hearted work about clicking one’s fingers.

If you like to learn about lesser-known black British history then this lecture is for you. Black Tudors is a talk by Dr Miranda Kaufmann, who has written about the same topic. During her discussion she will be looking at three of the 10 black Tudors in her book of the same name. This includes the story of Mary Fillis, who came to England from Morocco with her father. According to the Guardian, her book leaves behind a very serious question: “How did we go from this period of relative acceptance to becoming the biggest slave traders out there?”

Heaux Noire creates performance opportunities for black and brown womxn. Womxn of colour will use poetry and music to share their stories at an evening made to uplift them.  Performers include Maxine Sibihwana, a Ugandan poet who writes about relationships and religion, and Karishma Sangtani, a London- and Durham-based poet who explores themes of memory, family and identity

This film looks at the relationship between Jamaican and British youth culture through the lens of iconic music label Trojan Records. In the late sixties and early seventies, immigration was transforming music and culture, and through exclusive archive footage, interviews and dramatisation we are given a glimpse into the time. The film is followed by a Q&A and DJ set.