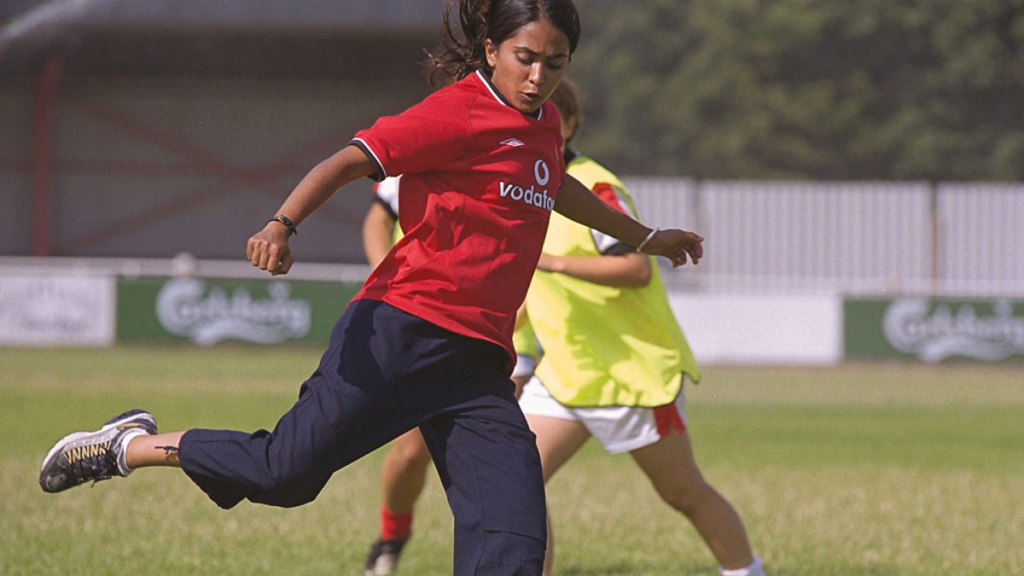 Last week, British-Nigerian professional footballer Eniola Aluko played in front of one of the biggest crowds ever to have turned up to watch a women’s football match in the last century, and the biggest ever in Italy.

“Some said I was finished, a few tried to finish me but I am still making history,“ she said on Twitter after a stunning performance for Juventus. Once a star of the England women’s team, in the past three years Aluko’s name has become synonymous with her battles against the Football Association (FA) and former England women’s manager Mark Sampson. Subjected to and witnessing racism over many years, when she finally spoke up about it she found herself kicked off the England squad and shunned by some of her former teammates.

Two years on, Aluko has fought back valiantly. However, while Phil Neville is said to have “left the door open”, Aluko has surely been scarred. She will not be playing the highly anticipated Women’s World Cup 2019, taking place in France this June.

As conversations pick up around the racism experienced by players like Raheem Sterling in the men’s game, let’s not forget the women’s game has its own, ongoing, host of problems. Following an investigation by the FA, last week it was announced that Sheffield United forwar Sophie Jones had her contract terminated by “mutual agreement” after she was found guilty of making monkey noises towards Renée Hector of Tottenham Ladies – the same type of noises that England’s Danny Rose suffered against Montenegro last Monday.

According to her talent agency, Renée is keeping quiet about the incident for the moment but that doesn’t mean that we shouldn’t shout about it. As noted by English international player Claire Rafferty in an interview with TalkSport about the incident, “[Racism] exists in every game and I think we’d be naïve to say it doesn’t.”

Such a shame that racism seems to be rising up again in football – I received some monkey noises today from an opposition player. The only reaction was to let the football do the talking and that we did ?? great start to the year! @ThlfcOfficial #COYSL #SHEvTOT #KickItOut

One of the first times I ever remember being subject to overt racism was on a football pitch. It’s a spiky atmosphere where temperatures and tempers run high, and where children can be cruel. I was called all sorts of names, and sworn at by juveniles who didn’t understand the words they were saying. Sometimes I shouted back. But then there was the racist words shouted from sidelines. And it was crushing.

As sensitively illustrated in the legendary Bend it Like Beckham and public experiences like Renée’s, I’m not alone in feeling marginalised playing sport. At a recent panel hosted by gal-dem, former footballer Lipa Nessa of the She Is Offside podcast told of how her time on the pitch put her off playing altogether. Another panellist, Paralympian Anne-Wafula Strike, explained how her child – who is mixed-race black – had recently been called a “paki” while playing football.

It’s worth acknowledging that racism bleeds into British girls and women’s football as much as it does boys and men’s for a number of reasons. For one thing, the sport is on the rise. Last month, England won America’s SheBelieves Cup for the first time, Nike unveiled unique kits for the international women’s teams for the first time, Barclays announced a multi-million pound sponsorship deal of the Women’s Super League, and it feels like every game is a record-breaker in terms of attendance. The World Cup tournament is set to be a banger.

Secondly, women’s football is often viewed both internally and externally as being “pure”. In many ways it is; the fans are categorically nicer, the players more engaging and seemingly grounded in sisterhood. Some black professional players like Sara Gama and Marie Antoinette-Katoto will swear to you that they’ve never faced racism on the pitch or from their teammates. But in the UK at least, which has the only professional women’s league in the whole of Europe, we need to be careful.

Last November, English football’s equality and inclusion organisation Kick it Out said reports of racism and homophobia were continuing to rise. Their report included statistics from FA Women’s Super League – though, they acknowledge, racism is an “underreported phenomenon” in the women’s game.

“There are few cases as high profile as Renée Hector or Eni Aluko (along with Lianne Sanderson and Drew Spence), but again that does not mean it’s not happening,” a spokesperson told me over email. “We certainly take racism in the women’s game seriously and we believe it’s an issue that needs more attention from the public, the media and the football authorities.”

At present, there is also not enough diversity in the women’s game. Recent statistics from This Girl Can show that South Asian and black women are more likely to be inactive than white women. As many as 36% of women from a South Asian background and 29.4% of black women do not do any physical activity. In the context of football, it’s telling that black Demi Stokes, Chioma Ubogagu and Nikita Parris are the only women of colour on the England squad, and that I can only find two women of Asian heritage (Maz Pacheco and Rosie Kmita) who play professional football in the whole of the UK.

Kick it Out also called out diversity in the professional women’s league.

“The progress made in the game over the last 10 years has been very positive, but it would be hard to argue that elite women’s football in England is truly representative of the country,” they say. “There are very few black women or women of colour coaching at the top level.”

It’s clear that the FA and other sporting bodies need to keep working on their approaches to racism within the women’s game. As Kick it Out put it: “Football has to ensure we create an environment where anyone who suffers racism knows they how they can report it and feels emboldened to draw attention to it.”

Of course, there should be justice for Raheem Sterling and his teammates and it’s brilliant that some of the racism elite black athletes suffer in sports is finally being recognised, but if we ignore the racism within the women’s game and it continues to grow at the pace it is, we will be heading towards a similar disaster.