My Chemical Relaxer: what it’s like to grow up black and emo 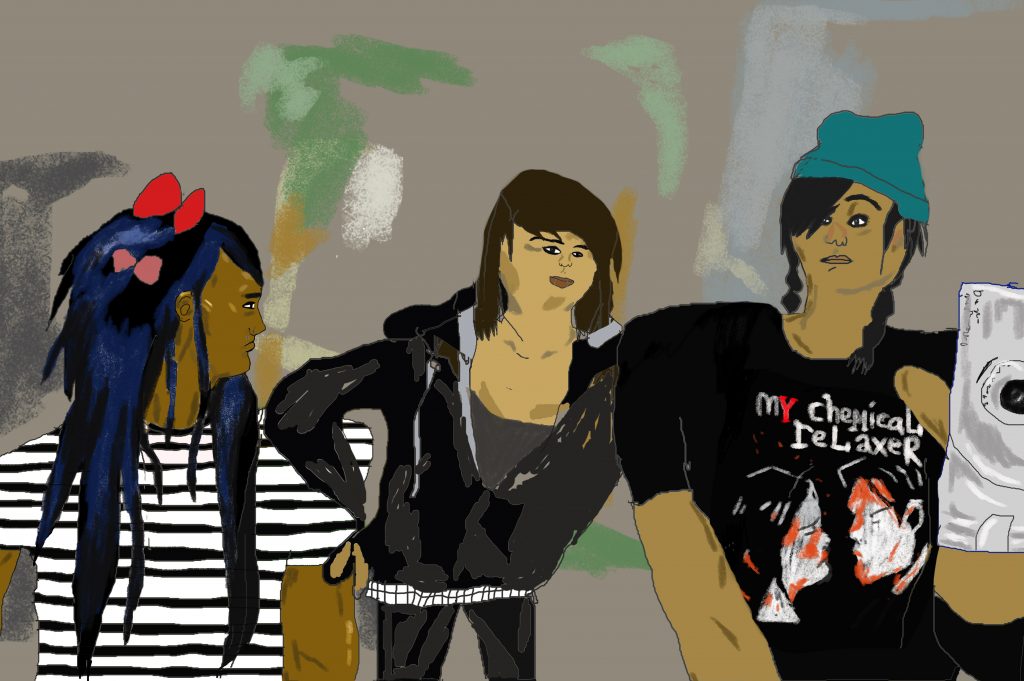 In the wake of emo’s 2017 renaissance, Jenessa Williams looks back on her teenage years as a dedicated follower of the Black Parade.

Which came first – the music or the misery? Whether my interest in emo came before or after my first true brushes with depression, I’m still not sure. I was a fairly melancholy pre-teen, deeply invested in dark literature and often suffering from insomnia.

Labeled a “deep thinker” in school reports and teased by my classmates for my high grades, well-spokenness and ever-growing collection of musical paraphernalia, I earnt a reputation as something of an intense kid. I wanted to hang on to every experience, collect scraps, make music and write poetry and pour my emotion into the world through art – anything to drown out the noise that was growing in my head.

I wanted people to understand my struggles, and yet it seemed somehow impossible to articulate to a family member or a friend what I hadn’t yet understood myself. I was embarrassed by the intensity with which I felt, the strange worries that set my mind buzzing. Raised within a family that was half stiff-upper Jamaican lip and half working-class white-British, I was somewhat anchorless, unsure of exactly where I fit in society. Too white to be accepted by the black girls at my school, and yet clearly different from the white girls too. I may not have really known it at the time, but this lack of “place” coupled with a family history of mental illness set me up for many years of imposter syndrome that would deepen into a serious anxiety trigger.

There was a romance to feeling as if nobody really knew me. It plagued and thrilled me in equal measure.  Finding emo music was a natural progression – it was a way to express my teenage feelings of melancholy and channel my fannish, borderline obsessive tendencies. My Chemical Romance, Paramore, Panic! At The Disco, Blink 182, Taking Back Sunday – I knew and loved them all, collecting lyrics in my diary like eulogies and painstakingly documenting band members under my “would like to meet” section on MySpace.

These musicians truly were my therapists, and I followed them diligently; in English class I waxed lyrical about the “poetry” of Brand New’s Jesse Lacey, stalked through limewire for demo versions of my favourite tracks and even threw a birthday party in tribute to Gerard Way. All I’d wanted was to be part of a gang, and it seemed like I’d finally found one – a place where it was great to be different, an island of misfits united in their own strangeness and feeling somewhat superior for it.

The MCRmy was a gang alright. Hiding behind a screenname on the My Chemical Romance fan messageboard gave me a confidence I didn’t have in the real world. Diligently sensible (or perhaps just mega-cautious due to my burgeoning anxiety issues), I never revealed any personal information, but I’d talk about My Chem incessantly – dissecting what a new music video might mean, posting fan art and often writing reviews, my first real foray into the world of music journalism.  On the site, nobody really knew who I was or what I looked like – I could assimilate just by how I wrote. My contributions were as valid as anybody else’s. As the compliments and replies grew, being emo started to seem more and more like the lifestyle choice for me.

Of course, in real life it wasn’t just about talking the talk. Being a true emo was all about the quest for a ghostly pallor and black role models were near on impossible to come by. This is where I hit my first hurdle – my dual heritage had lent me a complexion highly agreeable to a deep tan. In the summer I would stubbornly stay out of the sun to remain as pale as possible and if that failed I’d lighten my selfies in paint (a rudimentary “drawing” tool that preceded the likes of Photoshop), or else take advantage of the trend for the high exposure imagery that was du jour in the early noughties. I didn’t realise the disturbing and problematic nature of this at the time – that subconsciously, I had deemed my own blackness “unfashionable”, rejecting that side of my genetic make-up completely.

Then there were the clothes. They simply didn’t fit my body type. Copious amounts of black has never done my yellow-undertoned skin any favours, and for somebody who had few funds and even less understanding of fashion, the Primark cardigan I borrowed from my mum was more grey than black after a couple of washes, which caused derision amongst the more snarky kids in the scene.

Let’s not even get into skinny jeans. Stretch denim was not what it is now and if I was to find a pair that fit around my butt, it was often to the detriment of a sagging hem that would mark me out as a “grebo” – totally not the look I was going for. Tall and curvaceous, I didn’t know how to look like one of those <3poppunkprincessxoxo<3 girls with dainty features and dip-dyed poker-straight locks, the sort I so longed to be. I couldn’t do much about my stature and wasn’t brave enough to hit the hair dye, but I did know that my wild ‘fro wasn’t cutting it.

Here enters the jubilation of my first hair relaxer, circa 2006. I dabbled with straighteners in the past but I can still remember the extreme elation of looking in the mirror at my newly sleek hair and realizing that I looked just that little bit more like what I saw in magazines. I rushed home, donned my finest MCR tee and took a hundred wonky selfies. Limp, chemical-fried layers hanging over one eye, I angled my face to display my more prominent European features. This was as close as I was ever going to get to being my vision of an emo queen – but all at the expense of my true self.

My Jamaican grandmother would kiss her teeth in despair as I left the house in my monochrome aesthetic, begging my bemused mother to consider trying to coerce me into a nice frock. I felt defiant in my new uniform, but there was still a nagging anxiousness, the wariness that no matter how many rubber spiked bracelets I wore or copies of Kerrang! I had under my bed, my skin would mark me out as an imposter. I lived in fear that people would know how hard I was trying to fit in and were secretly mocking me for it. No matter how many lengthy Fall Out Boy song titles I committed to memory, MSN screen names I created or posters I layered over walls, there were no black faces looking back at me, reassuring me that I could belong.

The realisation that you don’t fit into a subculture designed to offer solace to those who don’t fit in elsewhere may seem ironic now, but at the time it was crushing. I had bottled up all this inner turmoil, convinced myself that my growing mental health issues “deserved” me a place in this scene whose lyrics understood me so well. But the other kids at school would pass comment that I “should be listening to RnB”, or remark that I was acting “pretty white for a black girl”. These comments hurt, but I couldn’t really deny them – I had always felt black, but at that time in my life, I would have merrily chosen to be visibly white for the sake of fitting in.

Gradually my relaxer grew out, as did my affection for emo. My love affair with the genre gave way to indie and nu rave before settling itself back into pop, alternative and RnB via something of a spiritual awakening at a Watch The Throne concert in 2012. Yet even now, I carry those years in my heart with a fondness and a fear – an affection for the emotions it helped me to process and the conversations it opened, but a heavy concern for future generations of impressionable teens who would give anything to look like the heroes they idolise, even if it means resenting who they actually are.

Whilst I can listen to that music now and enjoy it, I no longer need to see myself in its every facet. Instead of relying on my favourite musicians for comfort, I have grown to love myself through the medium of self-education, cultivating healthy relationships and developing the wisdom that seems to only come with age. Being emo is so much more than its aesthetics. And being mixed race is so much more than being able to pick and choose your privilege.

Nearly ten years on, I’m enjoying music for all different reasons, whether it’s enjoying the catharsis of an angsty afternoon with Wolf Alice or a self-care session with Solange. I’ll never truly regret those emo years, but as I stroll past the magazine racks on my way to snap up whatever I’m into that month and catch a version of my younger self flicking through Kerrang! or RockSound, how I don’t still long for her to see some more diverse hands reaching out to hold hers.