My hair is dark and strong, and I am proud 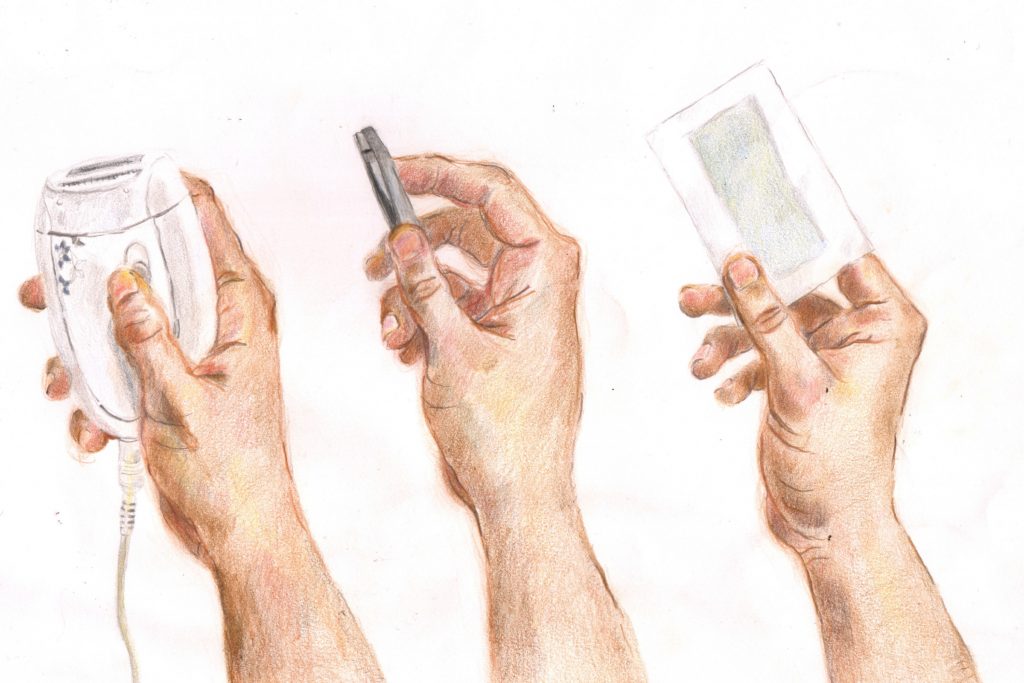 I was around nine or ten, definitely still in primary school when my well-meaning dad told me that my armpit hair had become very visible. So off me and my mum trotted to Boots, where she bought some Veet. The aroma of aloe vera masking depilation chemicals are the first things I associate with hair removal. And that trip to Boots marked the first in a long line of now, mostly abandoned hair removal techniques I’ve tried.

My skin is light but my hair is dark and strong. Before hair removal, I appreciated its strength and texture on my scalp, but its tenacity on my body was a source of worry for teenage me. I didn’t like the time that cream took to take it away, and found it infuriating that even after careful application and scraping, I was still left with patches of stubborn black weeds. I moved onto shaving, which was rough and required upkeep. Waxing was expensive and I had to keep it a secret from my mother – impervious to how she looked in a way I resented then, and admire now, she did nothing with her own body hair. No way would she get on board with me being nearly naked in front of a stranger for the purpose of removing mine. I bought an epilator for the inbetween days. If you’ve never used an epilator, I recommend it as a torture toy rather than a hair removal device.

“In my first year, on a drunken night out, a fellow fresher thought it appropriate to tell me that I would be pretty if it weren’t for the black fuzz above my lip”

Until university, I hobbled along with a combination of these insufficient methods, paranoid that my body hair would be so off-putting to people I fancied, I tried to use it as a deterrent for sexual misadventures that I thought I’d come to regret (it never worked). Then, in my first year, on a drunken night out, a (cis, straight) fellow fresher thought it appropriate to tell me that I would be pretty if it weren’t for the black fuzz above my lip. I cried. His apology, issued to me the next morning, included some instructional tips – “it’s really easy to get rid of”. Thanks, but I CBA.

It stuck with me though. At the end of my first year, I won a cash prize so I thought I would spend on something special, that I would never otherwise buy for myself. I chose to spend it on laser hair removal sessions. I thought it would give me shiny shins and a bare bikini line. Except, in actuality, it gave me patchy bare bits where the treatment was a bit effective. It was the worst £300 I’ve ever spent.

“I won a cash prize so I thought I would spend on something special, that I would never otherwise buy for myself. I chose to spend it on laser hair removal sessions”

Worse still, is that while you’re having the treatment done (it supposedly takes six sessions which have to be spaced out), you can only shave. I went on a Sun, Sex and Suspicious Parents style holiday to Greece that summer (another £300 I regret) for which I had to (brace yourselves) shave my bits. While lying on a recliner by the pool in the glaring sun, an American accent chirped up. “Ariii, what’s that?” I didn’t understand what he was pointing to. “That, there!” He was pointing to just outside the green triangle of my bikini bottoms. It was stubble, as strong and resilient as the most persistent weed pouring out of my poorly kempt lady garden. I was mortified.

Eight years later and I’ve come to be proud of my body hair. I get a wax occasionally as I enjoy the feeling of smooth legs. Sometimes, I get a wax because I know a partner will enjoy it. I don’t mind doing this because the rest of the time, they’re happy to address and make light of my body hair: they refer to my “tuft” with genuine affection, and sometimes I let them make a wish on my wonderfully long “lucky” neck hair. But I remember those early incidents and I’m aware that this body confidence doesn’t stand alone, but has been helped to withstand with the interrogation of the societal expectations of how women look.

I want to thank popular culture for making attempts to portray real bodies: there’s a way to go, but at least we’ve started. I want to thank brands like Birdsong who’ve tried to diversify their models: the call sheet for one of their underwear shoots stressed there was “no need to ‘prepare’ in any way stretch marks, body hair etc all welcome”. And finally, I want to thank my mother for pottering around the house with no sign of hair removal, maybe ever. Oblivious, Amazonian, fierce.