As the world stands still and independent media struggles to get by, NS10v10 is an addictive soundclash for us, by us, which is doing big numbers. 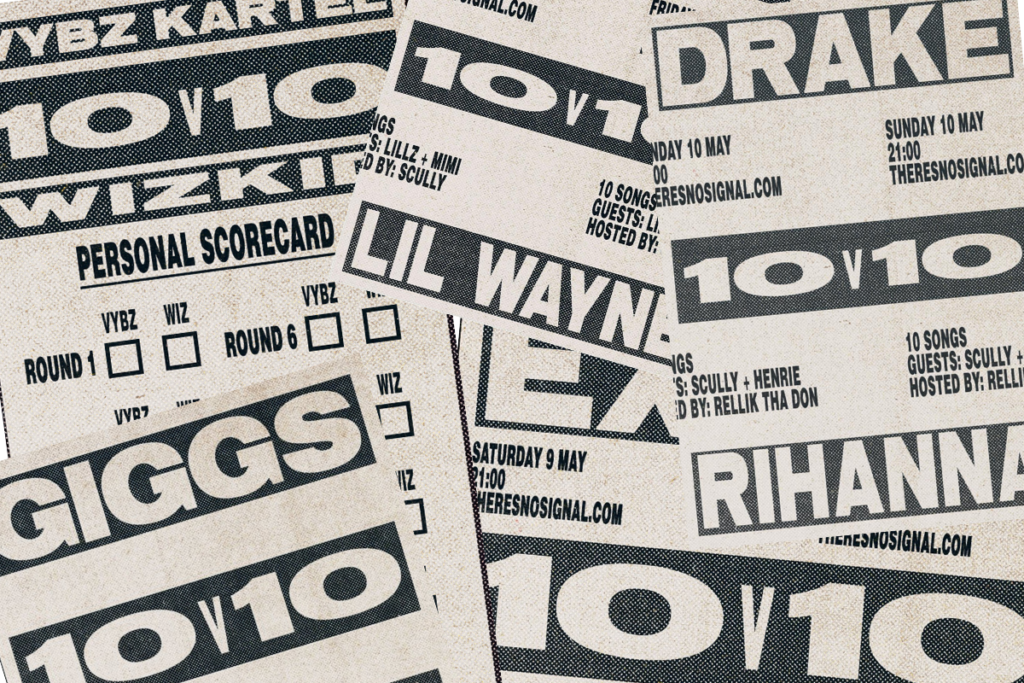 In case you didn’t know it already, we’re in week eight of the coronavirus lockdown in the UK, and with the recent news that Britain has the highest coronavirus death rate in Europe, it’s not looking like we’ll be DLT brunching anytime soon. But people still need an outlet. Something to bring us together and make us feel connected. And, with this hunger for human connection comes new opportunities for black creativity to flourish.

No Signal, a London based radio station has begun to fill the gap existing in our social lives. For the past five weeks, they’ve given us iconic 10v10 song battles, featuring some of the biggest names across the black diaspora. These battles are reminiscent of the Instagram live clashes we saw earlier in quarantine, with the likes of Skepta, Dave and Steel Bangelz going live from their profiles to showcase their favourite tracks. No Signal has offered a tailored version – giving dates and times so everyone that needs to know is in the know. Even if you miss it, they’ve got the whole thing recorded.

The internet radio station, which appears to have launched in March, is “powered by Recess”, a monthly party founded by Jojo Sonubi (also known for archiving photography project Black In The Day). For No Signal, Jojo and his brother David feature as the main MCs from their home in Essex, with DJ and presenter Henrie Kwushue working as head of production and contributions from Jameela, Lillian, Bola, Scully and VI.

Almost every other day, they bless our airwaves with a 10 round song battle, where only one artist can come out on top and the results are assessed via Twitter polls. J Hus v Kojo Funds, Beyoncé v Mariah Carey and Akon v T-Pain are just a few of the iconic battles we’ve witnessed so far. No matter where in the black diaspora you are from, there is an artist to rep and a reason to tune in. It is music by the people and for the people – reaching out to us all through some of the songs we can’t stop listening to and the ones we’re shocked that we ever forgot.

“Like clockwork, people were posting their predictions, pouring drinks and preparing for the highs and lows of each round”

While some have questioned whether some of the artists are comparable to each other, such as the recent Drake v Rihanna battle, No Signal has stated that it “is not a clash” and we would be better off considering it as a gameshow. They’ve brought on some amazing guests, such as radio presenter Julie Adenunga and former football player and sports commentator Ian Wright. Just as the music draws upon the diaspora, so too does No Signal offer itself up as a space for black entertainment for those currently representing us today.

What started off as a fun nightly event to have listeners “dance and enjoy life” to fill our time has quickly become a significant influencing force, with loyal listeners capable of effecting the charts. They had as many as 1.2 million listeners for their 3 May 10v10 of Wizkid v Vybz Kartel. With more and more people catching wind of the song battles, the timeline has been flooded with anticipation for 10v10. You can feel the buzz in the air as people ready for 9pm. Like clockwork, people post their predictions, pour drinks, and prepare for the highs and lows of each round. The timeline is scattered with nonsensical exclamations and one-liners that only make sense to those in the know.

“No Signal have strung a web of influence, spreading from London to Lagos proving and even influencing the ratings and charts”

It has given people something to look forward to at the end of the day – connecting us across Twitter, YouTube and Soundcloud to bring the conversation to every outlet. Through utilising these different social media platforms, No Signal has strung a web of influence, spreading from London to Lagos proving and even influencing the ratings and charts. After the Beyonce v Mariah Carey battle Mariah’s 2008 E=MC^2 album shot up the iTunes charts.

This brilliant use of social media has led to a lot of attention. They have left virtually no social media free from their touch, streaming live from YouTube, Soundcloud; via radio and online. Any possible way to get involved is there for their listeners to choose from. Even Burna Boy tuned in on Instagram Live and Twitter to claim his 10v10 crown with pride after the people’s votes deemed him the victor over Popcaan. Just two weeks ago, No Signal announced that they had partnered up with Spotify for their 10v10 battles, with the streaming service offering the official playlist after every show. What started off as a project hoping to engage and connect with the diaspora through music had transformed into a lucrative opportunity offering larger exposure.

It’s clear that creators who not only listen to their audience but openly celebrate them, are reaping the rewards of their authenticity. No Signal has joined the collective of black creatives that cannot be ignored, getting the sort of traction that mainstream outlets are searching for. It’s not just enough to play our music. Black creative projects like this shine because the moment you tune in, you can rest assured that this is for us and by us.

When I think about black creativity in white-dominated spaces, my mind often drifts to artists like Big Mama Thorton, the original mind behind the song ‘Hound Dog’. Today, when you hear that title, Elvis Presley is the first person that comes to mind. White-dominated media is happy to exploit our projects, leaving these trendsetters as nothing but footnotes in people’s discographies. But social media gives black creatives the opportunity to have their hands in the production and distribution of their ideas. Some mainstream platforms have tried to sponge off No Signal’s creativity with their own “sound clashes” focusing on African, Caribbean and R&B music. But, this has not gone unnoticed. The reach of No Signal across all platforms is just too great for that.

“Black creative projects like this shine because the moment you tune in, you can rest assured that this is for us and by us”

Unfortunately, while social media has always been a great place for the diaspora to meet and discuss, behind computer screens, some Twitter fingers are more brazen than they should be and some even feel empowered to bring their dusty, unwarranted opinions to dampen the light-hearted fun. I don’t think I need to remind anyone, especially black people, of how exhausting Twitter can become, drudging up ignorance and vileness that takes away from the innocence of it all.

Twitter has been a hotbed for this as of late, from sprinkle cake to misogynoir, it sometimes feels like no matter where you turn you can’t catch a break from hate. On the day of Wizkid v Vybz Kartel people just couldn’t help but crawl out of the woodwork to use this hour, meant for entertainment and fun, as a soapbox to provoke unnecessary conversations full of discriminatory stereotypes about Jamaicans and Africans alike.

No Signal had no interest in watching this negativity fester. They quickly released a statement on the matter, stating, “we do not condone xenophobia or misogynoir, whether explicit or implicit.” So far, the platform has proven dedicated to celebrating all factions of the diaspora, rather than using toxic discourse to fuel engagements. They are proving worthy of the respect and admiration that has taken them so far.

Black music is a powerhouse of influence that has shaped the lives and tastes of so many inside the diaspora beyond. It reaches us across the globe and continues to be the pacesetter of the music industry. I for one continue to look forward to every battle and welcome the innocent fun that 10v10 was always meant to be.