Foodies share the childhood dishes that remind them of their mums 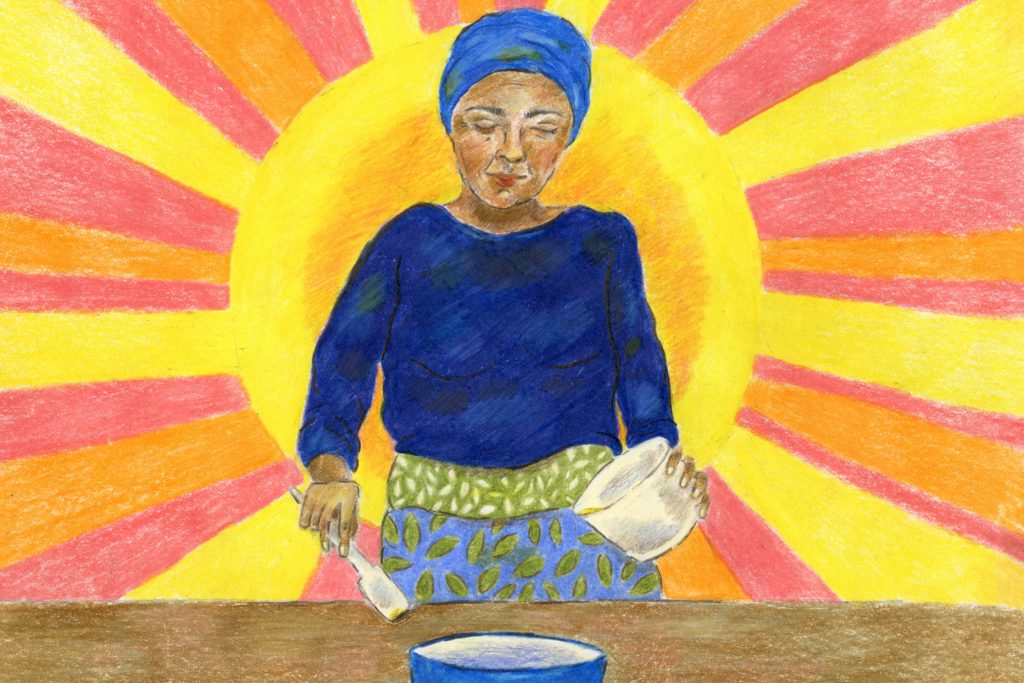 I’m in the kitchen of the flat I share with three other girls in Barcelona. I’m 23 and have just moved away from home for the first time to do my Masters in a city I had never stepped foot in until just a few weeks ago. My flatmates decide to do a “getting to know you” dinner by each making a dish that was representative of our own cultures. The only problem is, I have never cooked anything from start to finish before.

My mother spent two weeks in Spain with me to help me get settled in. She’s never been much of a cook (she makes excellent oatmeal cookies though!), but she leaves me armed with a folder full of my grandmother’s recipes. Sunday lunch at my house was always a treat. It was the only day of the week that we were allowed to drink soda – because couldn’t say no – and I distinctly remember her standing outside at the grill as the aromas of her famous BBQ wafted through the air.  As I lift the lid off the pot that contained my chicken adobo – the national dish of the Philippines – the smell of soy sauce, vinegar, and (lots of) garlic fill the kitchen. I look up and say: “Oh my God. It smells right.”

French gastronome Jean Anthelme Brillat-Savarin famously said in his book The Physiology of Taste,“Tell me what you eat and I shall tell you what you are.” Many of our first food memories are built in kitchens surrounded by the people, often women, in our lives. In these little corners, we are introduced to spices, sauces and textures that we carry with us no matter where in the world we end up. It is only when we venture out of our homes do we realise the flavours and ingredients that were so familiar to us are actually or dare I say, exotic, to the new people we meet.

Is there a connection between food and our cultural identities? How do we reclaim, revisit, and share these parts of us through the dishes on the table? For Mother’s Day, I decided to ask some women in the UK food industry to discuss these themes by taking a step back in time into mum’s kitchen.

Chef Anaïs Van Manen was born in France, grew up in Vietnam, and is 1/8 Dutch and 7/8 Vietnamese. “I don’t think any individual has only one identity. We are all constantly shaped by our experiences and interactions. So it is almost impossible to know yourself at any one point, let alone for others to know you,” Van Manen says.

She talks about her cooking style and how it has turned into an expression of home. “I think [my cooking] is very much connected to Vietnamese food, as I remember growing up eating on the streets with friends. At the same time, it is also very much influenced by my time in Singapore or Paris, because they were my homes as well at some point.”

When asked about her food memories with her mother, Van Manen laughs and says that, similar to myself, her mother was actually a horrible cook. “[It was my father] who loved eating and bringing us out for food. My mum didn’t feel the need to cook; she was extremely creative and preferred to draw. This allowed me to see how creativity flourishes when you’re not bound by necessity or expectations.”

Van Manen fondly remembers her father’s fried apple and honey dish served with blood pudding, which the whole family would gather around the table to enjoy. “In a way, I feel that with my dad being extremely supportive of my mum’s career, even though she might not have cooked for me, it meant that she could, as a woman, do her own things and actually spend some time with her kids.”

Known for her stints cooking on television and her cookbooks filled with simple and delicious recipes, Melissa Hemsley proudly shares that her food is actually influenced by her mother, Evangelina. “She taught us that when you cook, you can cook big. Put leftovers in the freezer, share them with somebody. Soups, stews, adobo, tinola, sinigang, everything will taste even better two to three days later,” says Hemsley.

She tells me that her mum grew up in Manila and her father was a lieutenant colonel in the army. His work meant he was away a lot and despite working six days a week, Evangelina made sure there was always a home-cooked meal for Melissa and her sister, Jasmine. Hemsley recalls the time she was sitting on the carpet at home as a child. Her mum boiled some prawns and proceeded to teach her how to suck the goodness from the prawn’s head. “I really believe food and identity are interlinked,” she says. She also says it’s her Filipino recipes that people tend to love the most.

Evangelina, on the other hand, never used recipes. She cooked with her gut and Hemsley says that, without a doubt, the dish her mum made that taught her the most about identity was her chicken . “To it’s a big bowl of loveliness. It’s chicken soup for the soul… It feels so familiar to lots of people, but it has the Filipino identity, flavours and love. Even thinking about it now it makes me emotional realising that my mum, no matter what, always made sure we had lovely broth, vegetables, and chicken to feed and nourish us.”

If the name Wincie Wong sounds familiar, it’s probably because you saw her on the current season of the BBC’s My Million Pound Menu. Wong was born and raised in New York City to Burmese parents and Chinese grandparents. Growing up in the Big Apple’s Chinatown, she says she never felt out of place as she recalls the aromas of Chinese herbal soup and steamed fish that often filled their home.

“When my mother passed away a few years ago from cancer, I was moved to start cooking mohinga, which is Burma’s national dish and my mother’s favourite. I still hear her voice every time I make it – it’s my way of talking to her again,” says Wong.

Despite her love of the complicated mohinga, Wong says that the dish that taught her the most about identity is actually a noodle salad called khao swe thoke. She tells me how her non-Burmese best friends would come over regularly just to get a taste of it. It was only when she saw the dish through their eyes that Wong realised the significance of the simple street food. “Now, it’s my comfort dish. It’s the first dish I asked my mother how to make when I arrived in London and it’s the dish I always go back to making when I’ve had a long day and need some nourishment for my soul.”